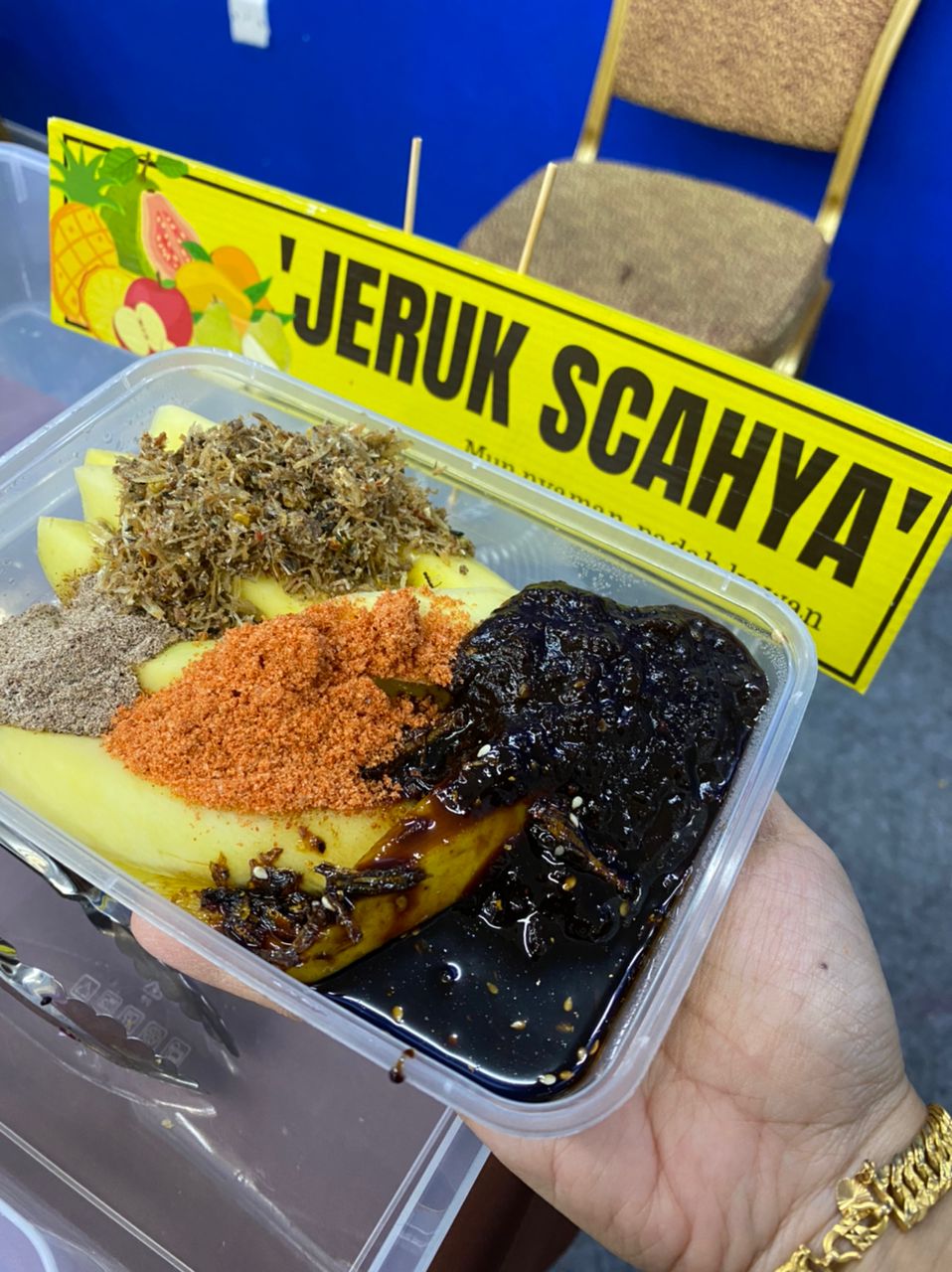 Most Malaysians can relate to how irresistible and mouthwatering pickled fruits (jeruk) are. The accompanying condiments make them even more enticing. Simply dipping the fruits into them causes euphoria.

Malaysians loved pickled fruits. It is undeniably a part of the local cuisine.

Many people enjoy pickled fruits of any kind, dipped in spicy, salty, or sweet condiments.

It can be served as a dessert after a heavy meal or as an appetiser. It’s even eaten as a snack during leisure time.

The culture of eating pickled fruits while dipping them in different condiments is not uncommon in Sarawak. Inventive entrepreneurs have created a variety of fruit dipping sauces.

Previously, there was only chilli salt to enjoy fruits with, but today’s selection is magnificent, with many to suit different taste buds.

Acknowledging this, the brand Jeruk Scahya has been constantly improving its ability to provide customers with a variety of condiments to dip their fruits in.

Karzimah Anuar, the person behind the brand, works tirelessly to create one of the best condiments to go with pickled fruits.

Despite the fact that there are many competitors in the market, Karzimah is undeterred. Instead, it fuelled her desire even more.

The start of ‘Jeruk Scahya’

Karzimah has had an interest in business since she was a young girl.

“My mother used to sell pickled fruits when I was in school. But only with the good ol’ chilli salt mix and soy sauce. I’d bring it to my classmates to sell.”

And when she left her full-time job six years ago, Karzimah decided it was time to get back into business.

“I used to come home late at night after work. I had no one to care for my children, so I decided to quit,” said the mother of two.

When she quit, she became immersed in the business world as she sought financial stability.

“I began by selling apam balik. Then I started selling clothes. In the meantime, I would sell pickled fruits made from mangoes from my parents’ farm. They had a lot of leftovers, so I decided to pickle them to sell,” she said.

Karzimah became motivated to continue after receiving positive feedback on her pickled fruit sales. The 32-year-old used to sell them on her Facebook page.

“However, when I attended a course organised by Usahawan Mikro Kebajikan (UMK), I was encouraged to sell my products physically,” said Karzimah.

‘Jeruk Scahya,’ established in 2021, is now sold at various event booths, through agents, and at their physical shop in Majma Mall, Kuching.

According to the entrepreneur, her pickled fruit product is also available in Miri, Sibu, Sarikei, and Sri Aman. It is also popular among West Malaysians who visit Sarawak.

She hopes to be able to sell her pickled fruit and condiments in a more permanent location, such as a shop lot, in the future.

“I’m looking for a place to call home for my business, something named after my family.”

And, while she works toward that goal, Karzimah never forgets to please the local taste buds with her products.

Being a single mother is not a hindrance

Karzimah conceded to being a single mother during an interview with New Sarawak Tribune.

“It’s a tough thing to say in our community. However, it is my truth. Nonetheless, it does not discourage me, but rather motivates me even more.”

Six years ago, she dabbled in business while also caring for her children full-time. The challenge was immense, as watching over children while working is no easy task. Nonetheless, Karzimah persevered in the hope of making a name for herself.

“I learned that as women in general, we don’t have to rely on others. At least we are spending money that we have earned through blood, sweat, and tears. By having something to do, we are also preserving our identity for the future,” she said.

Karzimah shared that one of her current challenges in life is sleep deprivation.

“I’m trying to balance my life and my business. Fortunately, my two children are independent. They will also help me at times.”
Knowing how difficult life can be, she aims to help everyone she meets.

“I’ve been through tough times before. Therefore, I want to assist as many people as possible by providing opportunities to those in need.”

From the farmers who provide her with the fruits to the agents she hires to sell her pickled fruits, Karzimah believes that hardship does not hinder success, but rather ignites it.