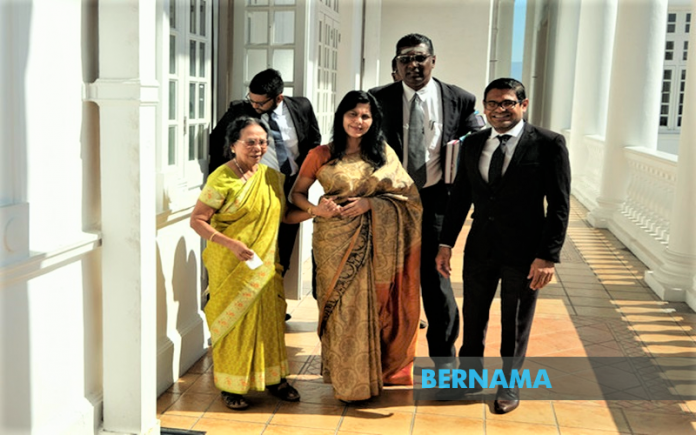 KUALA LUMPUR: A woman claiming to be the wife of former MIC president Tun S. Samy Vellu is seeking to be a party in Datuk Seri S. Vell Paari’s lawsuit to have Samy Vellu’s mental health determined by the court.

When met by reporters, counsel R.S.N. Rayer who is representing Meeriam Rosaline Edward Paul, 59, said the application to be an intervenor was filed last Friday and the sealed copies of the document given to Vell Paari and Samy Vellu’s lawyers yesterday.

“An inquiry proceeding initiated by Vell Paari to determine his father’s mental health has been postponed… This follows an application by my client to be included as a party in the suit,” he said.

Rayer said High Court judge Datuk Ahmad Bache had allowed the adjournment pending his client’s application to be an intervenor in the suit.

“We are saying that she has the right to intervene as she is affected by the proceeding, which is why she has to intervene. Our position is that Tun (Samy Vellu) is mentally fit and healthy,” he said after he met the judge in chambers during case management, here, today.

He said the court fixed Jan 7, next year for case management.

Meeriam Rosaline, who was present in court today told reporters that she had come to seek justice.

On Dec 2, Vell Paari filed the suit, seeking a court order that an investigation be conducted to ascertain the mental fitness of his father, and whether the former MIC president and Works Minister has the capacity to manage himself and his matters.

In the suit, Vell Paari sought an order that a date, time and place be set for an investigation to be conducted under Section 52 of the Mental Health Act 2001 on his father, to determine the period his father had been suffering mental disorder.

He also sought a court order to find out if his father is capable of giving orders to his lawyer to act on his behalf (Samy Vellu) and to determine the types of property his father owned.

The former MIC secretary-general also requested that consultant neuropsychiatrist and Neuro-behavioural Medicine head at the Penang Adventist Hospital, Dr Prem Kumar Chandrasekaran, 52, or other mental health experts, be given access to examine his father personally and prepare a report on the defendant’s mental capacity.

In the event that the defendant is found to be suffering from a mental disorder and incapable of managing himself and his affairs, Vell Paari will seek that several individuals including himself (plaintiff) and lawyer Datuk C. Vijaya Kumar be appointed by the court as committee members to manage the defendant’s estate.

If the individuals are allowed by the court to be appointed as committee members, the plaintiff will seek that the court determine the powers of the committee, set a provision for its costs and expenses as well as remuneration to be paid to the members.

Vell Paari will also seek an order for him to be appointed as the defendant’s litigation representative in any legal proceedings involving his father, properties or interests.

Meanwhile, Vell Paari in his affidavit of support said his mother Toh Puan R. Indrani, 79, and his younger sister, S. Mangayerkarasi, 56, would support the suit and would confirm the matter in their affidavits of support.

The plaintiff said Prof David Ames, a consultant psychiatrist from Victoria, Australia, had diagnosed his father as having dementia in 2017 and he was prescribed medicines for the condition.

He said consultant psychiatrist from Pantai Hospital, Dr Bharathi Vengadasalam also provided reports that Samy Vellu was suffering from a major neurocognitive disorder and was incapable of managing his finances and estate, administering medicines or making decisions.

He said from the findings of the two consultants, his father had mental health disorder and lacked the physical and mental capacity to handle himself and his affairs.

Vell Paari added that since 2017, he had assisted his father in managing his affairs and estate and had used his own funds for the purpose, as his father could not have access to the funds from his bank accounts due to health reasons.

On Dec 12, the Ipoh High Court fixed Jan 17, 2020 to hear an interim application from Meeriam Rosaline, who is seeking unconditional access to Samy Vellu, apart from a monthly alimony payment of RM25,000. – Bernama

Welfare of foreigners will not be neglected

List of fake news as of 11 AM today by KKMM

Welfare of foreigners will not be neglected

List of fake news as of 11 AM today by KKMM