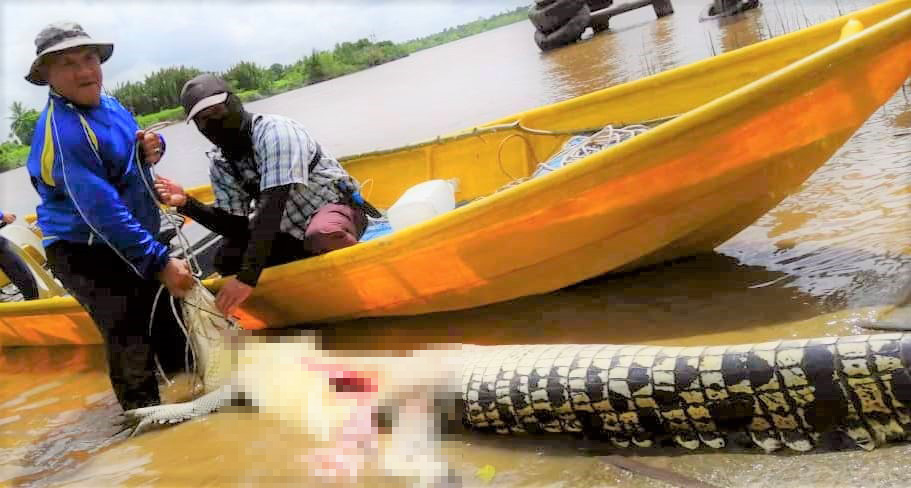 KOTA SAMARAHAN: The crocodiles hauled up to the Muara Tuang ferry point yesterday are “not the ones that grabbed my son Atan,” said Azhar Razali.

Azhar, 55, added that he was still reeling from the loss of his son Azyan, known lovingly as Atan, having witnessed up close the tragedy.

Atan was attacked by a crocodile in Sungai Meranek on Jan 12, and part of his body is yet to be found.

According to him, one of the crocodiles caught by SCH was 10 feet long while the other was smaller in size.

“These crocodiles are not the ones that attacked my son because the crocodile I saw was much larger than these two.

“The reptile I saw was probably 18 feet long,” he said.

Azhar said the hunting operation by SCH started on Monday along the Samarahan River and continued to the upper reaches of the river.

“Fresh chickens are used as bait and are kept close to the river.

“Upon inspection, SCH found two crocodiles hooked,” he said, adding that the crocodiles were killed at the ferry point before being disembowelled to search the stomach contents,” he said.

Azhar hoped that those with expertise in hunting crocodiles search for the reptile that devoured his son because he does not want the same tragedy to happen to other folk in the area.

“Atan was my right hand … the pillar, because he was the one helping me provide for our family. His loss is devastating,” said a pained Azhar.

He said that when his son’s right leg was recovered during the search operation on Jan 14, he was confident that it belonged to Atan because there were no other cases of crocodile attack reported during those few days.

He related that one of the residents of Kampung Meranek was attacked last December.

“Throughout my stay in this village, only these two have been victims.

“Before this, there has never been a tragedy like this, let alone being disturbed by crocodiles even though we’re on the river every day looking for our catch,” he said.