Year of high-profile verdicts, two get jail & fine, others freed 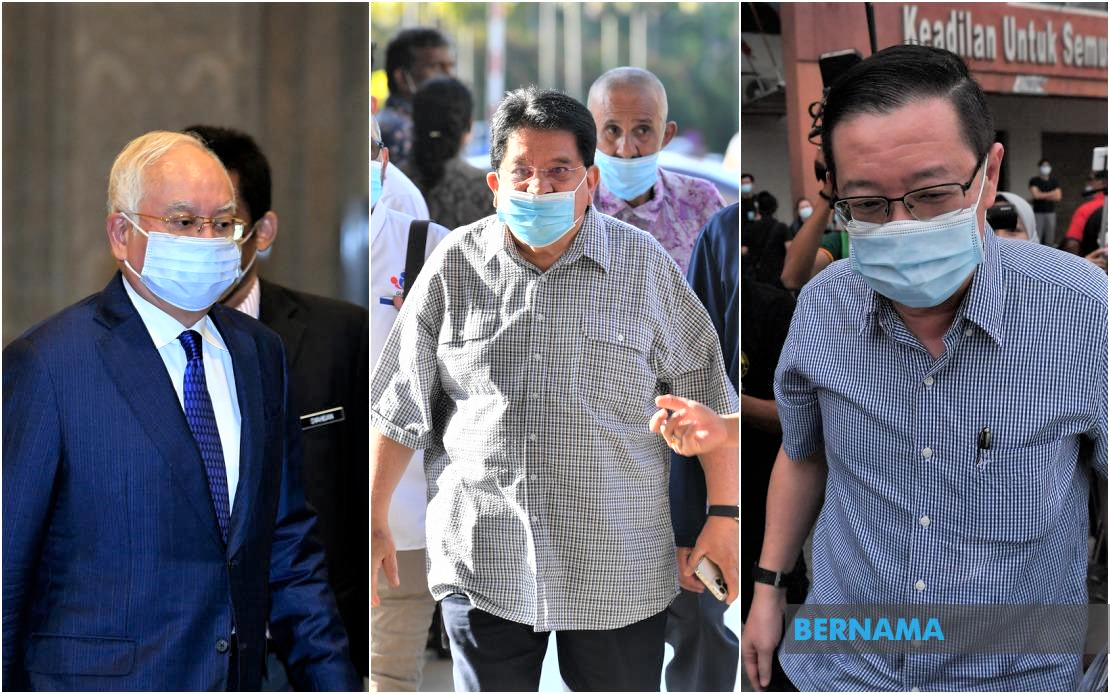 KUALA LUMPUR: 2020 has indeed been an eventful year for the country’s judiciary with verdicts made over several high-profile cases, with the most prominent, involving former Prime Minister Datuk Seri Najib Tun Razak.

Justice Mohd Nazlan, in his 801-page grounds of judgment, dated Aug 21, regarded the case as the worst kind of CBT involving a prime minister.

Not satisfied with the ruling, Najib, 67, filed an appeal and submitted 307 grounds why he should be freed of the charges.

However, Judge Mohamed Zaini Mazlan granted Tengku Adnan’s application for a stay of execution of the jail term and fine pending his appeal.

The judge among others held that the RM2 million given by the businessman, Tan Sri Chai Kin Kong, to Tengku Adnan had remained in Tadmansori Holdings Sdn Bhd’s (THSB) account for his benefit and that he had used the company, which he (Tengku Adnan) owns, as a facade to receive the fruits of his crime.

The decision by the court is the second high-profile case involving Umno leaders found guilty of criminal charges that were filed during the Pakatan Harapan government, following the fall of the Barisan Nasional government in May 2018.

Tengku Adnan was also charged in another High Court with accepting a RM1 million bribe from another businessman Datuk Tan Eng Boon, but last Dec 7, he was given a discharge not amounting to an acquittal (DNAA) on the charge.

The money was deposited into Tengku Adnan’s CIMB Bank account as an inducement to assist an application by Nucleus Properties Sdn Bhd to increase the company’s plot ratio with regard to a development project on Lot 228, Jalan Semarak, here.

According to the court, it was not an order for full acquittal, but the DNAA was granted following the prosecution’s application as it did not wish to continue with the prosecution as there were new developments in the case.

Tan had pleaded guilty to an alternative charge with abetting the politician in committing the offence, and was fined RM1.5 million.

He was given the DNAA following an agreement with the prosecution under the terms of which the federal government will receive a substantial sum running into several million ringgit.

The Malaysian Anti-Corruption Commission (MACC), in a statement issued the same day (May 14), stated that under the agreement, Riza Shahriz was required to pay a compound to the government under Section 92 of the Anti-Money Laundering, Anti-Terrorism Financing and Proceeds of Unlawful Activities Act 2001, which is punitive as an alternative to the charges that were brought against him.

It said the Malaysian government was expected to recover assets worth $107.3 million (RM465.3 million).

On Sept 4, again on the 1MDB saga, the High Court acquitted and discharged UK-based Goldman Sachs International Ltd and its two Asian entities, Goldman Sachs (Asia) LLC and Goldman Sachs (Singapore), on charges relating to the sale of 1MDB bonds amounting to RM27.2 billion (US$6.5 billion) after the prosecution withdrew all the charges against them.

Another high-profile case involved former Sabah Chief Minister Tan Sri Musa Aman, who was acquitted on 46 corruption and money laundering charges in connection with contracts for timber concessions in the state.

The prosecution informed Judge Datuk Muhammad Jamil Hussin that it had withdrawn all the charges made against Musa, 69, in both the cases (corruption and money laundering).

Musa’s lawyer Francis Ng Aik Guan said both cases needed an ending and the court ought to make an apt decision, that is to acquit and discharge his client of all charges for fear that he will be re-charged.

Following which, and High Court Judge Mohamed Zaini Mazlan fixed Feb 10 next year to hear the oral submissions before deciding whether to acquit or order Rosmah to enter her defence.

Najib and two of his sons were also sued by the Inland Revenue Board (IRB) for not paying their taxes.

IRB had obtained a summary judgment against them, whereby the court had ordered Najib and his sons — Datuk Mohd Nazifuddin, 37, and Datuk Mohamad Nizar, 42, — to pay a total of RM1.74 billion.

The three of them appealed against the ruling and the Court of Appeal had set June 16 for the hearing.

Meanwhile, Tengku Adnan was also sued by IRB for income tax arrears, but the matter was resolved amicably at the High Court on Sept 23 with Tengku Adnan agreeing to pay RM40,358,336.61.

According to the draft consent order obtained by the media through the court search system, the Malaysian government through IRB agreed to amend Tengku Adnan’s additional assessment notices for the assessment years 2012 to 2017.

“The additional amended tax amounted to RM40,358,336.61, including the penalties as part of the total tax settlement and is considered as a composite assessment under Section 96A of the Income Tax Act 1967,” it said.

Another issue that took centre stage this year was on the Penang undersea tunnel project, where former finance minister Lim Guan Eng is facing charges for corruption and criminal breach of trust (CBT) over the project.

The court had set 31 days beginning this June for the trial.

The Bagan MP was also slapped with one corruption charge at the Butterworth Sessions Court for allegedly helping to secure the project to a company, while businesswoman Phang Li Koon was charged with abetting him in committing the offence.

The cases have been fixed for mention on Feb 19.

Meanwhile, a former member of the police Special Action Unit (UTK), Azilah Hadri has failed in his final legal bid to set aside his conviction and death sentence for the murder of Mongolian woman Altantuya Shaariibuu, following the Federal Court’s decision in dismissing his review application against the conviction last Dec 8.

Azilah, however, has one option left, which is to seek a royal pardon from the Sultan of Selangor. He has filed an application to have the death sentence commuted to a prison term.

Another interesting case this year was an attempt to stop the Sabah state election at the eleventh hour by Datuk Jahid @ Noordin Jahim, but it was thrown out by the Federal Court.

Jahid had wanted to stay the state election pending disposal of an appeal over who was the rightful chief minister of Sabah Datuk Seri Mohd Shafie Apdal or Tan Sri Musa Aman.

The apex court made the ruling on Sept 11, a day before nomination for the Sabah election, with polling held on Sept 26.

Decisions on some civil matters also made headlines, including the one made by the High Court on Aug 7 in allowing an application by Prime Minister Tan Sri Muhyiddin Yassin and three others to strike out a suit brought by former Prime Minister Tun Dr Mahathir Mohamad and five others over the nullification of their membership in Parti Pribumi Bersatu Malaysia (Bersatu).

The judge ruled that Dr Mahathir and the other plaintiffs had no locus standi to bring the legal action against the defendants, saying that the court was guided by the provision of law and cases referred under Section 18C of the Societies Act 1966 which states that any decision of political parties is final and cannot be challenged in court.

Another is on a High Court ruling on Sept 3 that the one-day Parliament sitting on May 18 was valid and in accordance with the law, even though it was unusual and unprecedented, to avoid the spread of Covid-19.