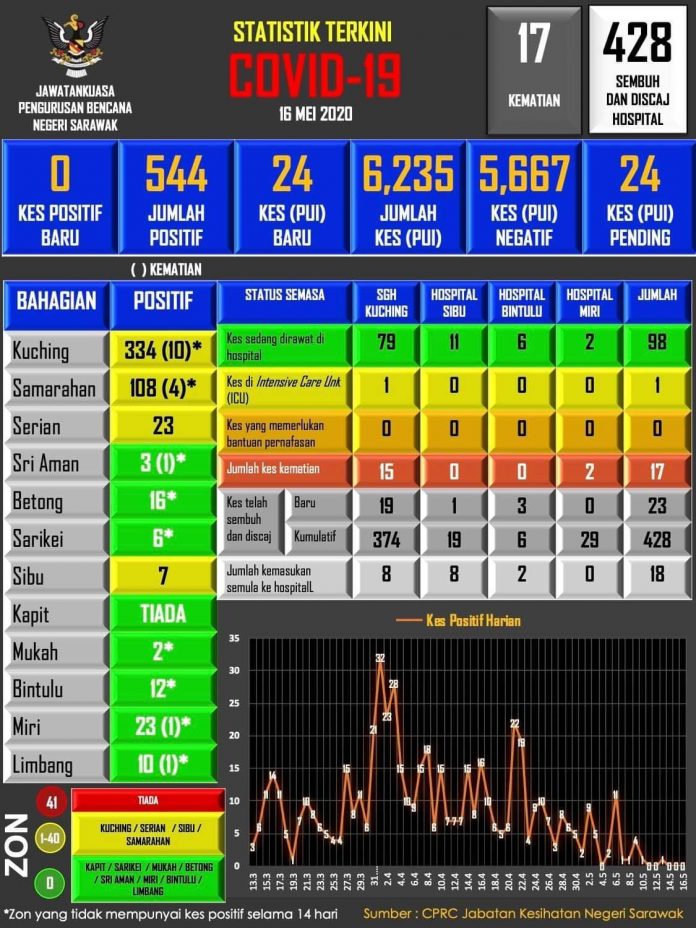 KUCHING: Sarawak recorded no new positive Covid-19 cases yesterday for the third consecutive day, with the total number of cases remaining at 544 since the first positive case was reported on March 13.

The Sarawak Disaster Management Committee (SDMC) in a statement yesterday said that Bau had been declared a green zone, making six yellow zones and 34 green zones in the state.

They said that 24 new person under investigation (PUI) cases had been reported yesterday, while the number of PUIs awaiting laboratory results was 24.

“A total of 23 cases have recovered and been discharged from hospitals. Of these, 19 are from the Sarawak General Hospital (SGH), three are from Bintulu Hospital, and one is from Sibu Hospital,” they said.

As of yesterday, they said that the total number of cases which had recovered and been discharged was 428 (78.68 percent).

According to SDMC, 98 cases were undergoing treatment at hospitals, with one in intensive care unit (ICU).

Overall, they said that 18 cases were relapse cases, whereby individuals had re-tested positive for Covid-19 and been admitted into hospital again.

“Until today (yesterday, May 16), we have coordinated the return of 6,164 students from West Malaysia, Sabah, and Labuan.

“We have also coordinated the return of 1,542 local students in Sarawak back to their respective home towns,” said the committee.

Meanwhile, SDMC reported that yesterday, 407 persons under surveillance (PUS) had been checked into hotels to undergo quarantine, bringing the total number of PUS in 31 hotels to 2,603, while 4,289 PUS had completed their quarantine.

Outsiders can stay until March 31