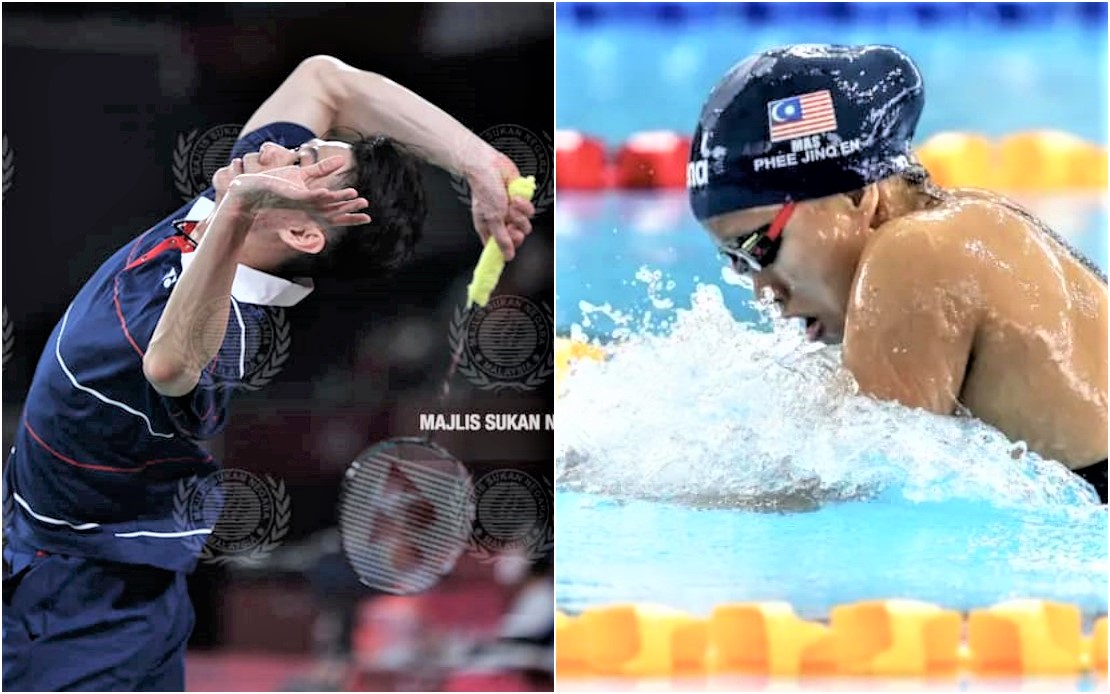 TOKYO: While others around them continued to flounder, it was left to national men’s singles shuttler Lee Zii Jia, woman sailor Nur Shazrin Mohamad Latif and swimmer Phee Jinq En to save the day for Malaysia on Day Three of the 2020 Tokyo Olympics today.

Zii Jia’s smashing performance on his Olympic debut was like a breath of fresh air to the badminton camp after the women’s doubles and mixed doubles pairs fell to their second straight defeat in their respective groups.

The 23-year-old Zii Jia was simply sublime as he brushed aside Ukraine’s Artem Pochtarov 21-5, 21-11 in just 25 minutes in their opening Group M match at the Musashino Forest Sport Plaza here.

However, the reigning All England champion can expect a tougher time on Wednesday (July 28) when he takes on Frenchman Brice Leverdez.

The pair, who won the silver medal at the 2016 Rio Games, took to the court knowing they had to beat Germans Mark Lamfuss-Isabel Herttrich, but nothing seemed to work for the Malaysians as they fell 12-21, 15-21.

It was also the end of the road for national women’s doubles pair Chow Mei Kuan-Lee Meng Yean after they succumbed to their second straight loss in Group A today.

Sailor Nur Shazrin, meanwhile, performed admirably in the first two races of the women’s Laser Radial event at the Enoshima Yacht Harbour in Fujisawa, near here.

After two races, the 2018 Asian Games bronze medallist, finds herself in 11th spot out of 44 sailors with eight more races to go, including two on Monday (July 26).

In the men’s Laser Standard event, Khairulnizam Mohd Afendy is 26th out of 35 sailors after Race One. There are still nine more races to go after today’s Race Two had to be postponed to Monday (July 26) due to wind conditions.

It was a bittersweet moment for national swimmers Jinq En and Welson Sim Wee Sheng at the Tokyo Aquatics Centre.

Jinq En can give herself a pat on the back after finishing second in Heat Two of the women’s 100-metre (m) breaststroke event in 1:08.40 seconds (s), which also happens to be a new national record — eclipsing her own previous mark of 1:08.50s that she clocked en route to bagging the gold medal at the 2019 SEA Games in Manila, the Philippines.

Sadly, her time was still not fast enough for her to be placed among the top 16 swimmers to advance to the semi-finals, which will be held on Monday (July 26).

The 23-year-old Jinq En ended up 29th out of 43 competitors in the overall ranking.

Welson, meanwhile, managed to set his own season’s best in the men’s 200m freestyle qualifying round despite making an early exit from the Tokyo Olympics.

The 24-year-old Sarawakian finished 32nd out of 39 swimmers in the overall ranking.

National artistic gymnastics queen Farah Ann Abdul Hadi also failed to shine in the individual all-around women’s qualifying round when she ended the day in 68th spot out of 85 participants at the Ariake Gymnastics Centre here.

Meanwhile, apart from the two sailors, the other Malaysians who will be in action on Monday (July 26) are men’s doubles shuttlers Aaron Chia-Soh Wooi Yik, who will be up against world number two Mohammad Ahsan-Hendra Setiawan of Indonesia. – Bernama