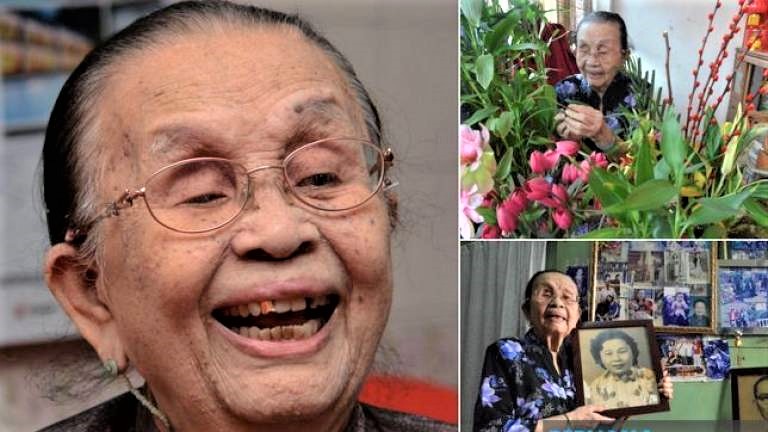 As she turned 100 this year, Lim, who is more affectionately known as ‘Po Po’ (grandmother) Lim, will be celebrating Chinese New Year without the lion dance, dragon dance, lantern parade and so on.

In fact, Lim whose birthday was on Saturday (Feb 6), will be celebrating Chinese New Year without the presence of all her children, grandchildren and great-grandchildren due to the implementation of the movement control order (MCO).

“It is sad as two of my children lives in Singapore and Kuala Lumpur and one of my grandchildren lives in England. Often, they will return a week before the festival to help clean the house and so on.

“But I can’t be angry with them because there is a disease (Covid-19) that prevents them from returning to the village. I hope next year the disease is gone so that I can also celebrate the new year as lively as before,” she told Bernama when met at her shophouse in Kampung Cina here.

Lim, who has three children, 10 grandchildren and eight great-grandchildren, is still grateful that the big feast on Thursday evening is still allowed even though it is limited to 15 immediate family members, who live within a 10-kilometre radius.

Therefore, at the feast, Lim will only be accompanied by her son Poh Tik Heng, 71, and daughter-in-law Fu Sek Sue, 64 with her three grandchildren.

Although the feast will only be held in moderation, Lim still prepares her must have dish, ‘Ayam Kam Heong’ which is a favourite of the whole family.

“Usually, I will prepare 10 chickens to serve my family but as many of them cannot return this time around I may cook about one or two chickens only. I did not even prepare ‘baju raya’ this year, not only because of MCO, but also because I feel too old to have a ‘baju raya’,” she said with a laugh.

Lim, who migrated to Terengganu and lived in Kampung Cina for more than 70 years after following her late husband Poh Chew Say who worked at sea, said that during this MCO period, she was still able to communicate with her children, grandchildren and great-grandchildren through video calls.

“People are very lucky now, even if they live far from each other they can still communicate (via video call). In the old days if one wants to say hello one needs to go through a letter that sometimes takes months to reach the family members,” she said.

Asked about her hopes in conjunction with Chinese New Year, Lim, who is still healthy without any illness, said that she always prayed that the Covid-19 pandemic would end soon and the situation would return to normal so that her family members could regroup. – Bernama

De-stress with a sip and paint session

SARAWAK must avoid repeating the mistake made in Sabah...

A TOTAL of 34 telecommunication towers under the Sarawak...

THE introduction of the Forest (Amendment) Bill 2022 is...