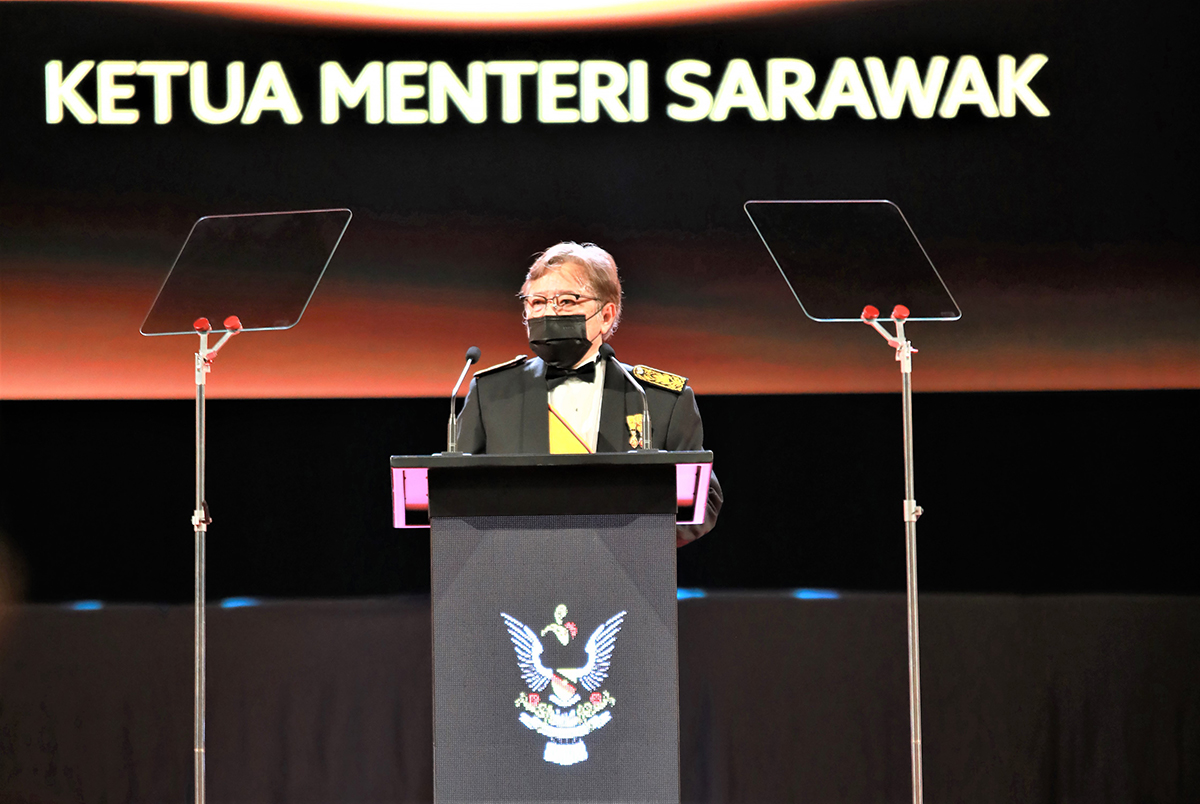 KUCHING: Sarawak has fully vaccinated 90 percent of its population aged 18 years and above against Covid-19.

Chief Minister Datuk Patinggi Abang Johari Tun Openg, in confirming this, said almost 75 percent of teenagers between the age of 12 to 17 years old have gotten their first dose of the vaccines.

“As a follow-up measure to curb Covid-19 virus infection, the state government is of the view that the use of approved antibody or anti-viral drugs as being pursued by several countries including Malaysia, is a positive step to further combat Covid-19,” he said.

He was speaking at a state banquet in conjunction with the 85th birthday celebration of Head of State Tun Pehin Sri Abdul Taib Mahmud at Borneo Convention Centre Kuching (BCCK) on Saturday night (Oct 9).

“I acknowledge that our biggest challenge in dealing with this crisis is to balance the various needs with adequate state financial resources. The government needs to balance between efforts to save lives and protect livelihoods, between the various needs of sectors and enterprises, and certainly balance the pressing needs of today and also to look after the interests of future generations.

“Thus, as a step forward, I have launched the Post Covid-19 Development Strategy (PCDS) 2030, and we are ready and is now actively mobilising the strategy to move Sarawak into a developed state by 2030,” he said, adding he was confident that with the transformation, the state would be able to grow the economy at an average rate of 6 to 8 percent per year.

Abang Johari added the Sarawak government had allocated RM63 billion to implement the PCDS 2030, and under the 12th Malaysia Plan (12MP) period, allocation would be provided for the implementation of more than 1,000 programme and projects focusing on developing the enablers such as basic infrastructure namely roads and bridges, treated water and electricity supply and telecommunication network.

“Through this creative financial modelling and regeneration of income, Sarawak will continue to enjoy a strong fiscal position to catalyse the state’s economic growth,” he said.

With PCDS 2030, investor confidence in Sarawak’s economic position was high because of its comprehensive and systematic development strategy that could boost sustainable economic growth.

“Most recently on Oct 4, Bursa Malaysia Derivatives Bhd has launched the implementation of the East Malaysia Crude Palm Oil Futures (FEPO) contract which will help boost the development of Sarawak’s palm oil industry to a higher level with the opportunity to secure better prices with our palm oil open for futures trading.

“This will provide more employment opportunities for Sarawakian as Sarawak is a major contributor to crude palm oil production and I expect that in the next two years, Sarawak will be the country’s largest palm oil producer with an output exceeding the current rate of 4 million tonnes per year,” he said.

In addition, he said on Oct 6, he had led a delegation to interact virtually with a consortium of investors from South Korea who plan to produce hydrogen gas and green ammonia in Bintulu which will definitely have a huge impact on the petroleum industry in the state.

“The state government is confident that the increase in foreign direct investment in the state will continue to improve the state’s poverty rate to less than 12.9 percent recorded last year,” he said, adding that the success of industrial programmes implemented in Samajaya in Kuching and Samalaju in Bintulu has provided high-income employment to about 20,000 young people.

Abang Johari also said he strongly believed that the confidence of economic sector players and foreign investors in the stability and huge economic growth potential of the state, would allow the state to continue to increase the average household income by creating more employment opportunities for the people, particularly the youth.