“NGARAN ki Elexson. Auk Cebup. Ituk neh celita ki,” which translates to “My name is Elexson. I am a Cebup (descendant). This is my story.” Not many are familiar with the race known as Cebup. Therefore, Dr. Elexson Nillian strive hard on his ambitions to make known the existence of the Cebup community living behind shrouds of trees on the land of Long Selapun, just by the river of Tinjar, also known to as upper Baram.

According to Elexson, the remote village is an eight-hour drive from Miri city, while previously using a long boat, it took them 14 hours being in the river just to arrive home. The village had no communication means, but the villagers depended on a radio station called Talidio Kenyah FM to communicate with others, “Everything we want to deliver, we do it through the radio.

Sometimes if someone is passing by my village, we would write a letter and asked them to pass to the receiver.” Having only a total of four longhouses throughout Sarawak, the Cebup community comprises a population of less than 10 000, with his longhouse consisting of not more than 200 people, Elexson chuckled, “That is if all the families are coming in from the city to gather in the longhouse during a festive season.”

Otherwise, the numbers would be at less than 100,” he explains. Centuries ago, the Cebup community which originated from Long Pokun, Kalimantan migrated to the Baram river due to the war during the Rajah Brooke Era.

However, their first settlement had been abandoned in the early 1940s when the government told the communities to move downriver for easy transportation of medications and educational books. Thus, the communities were segregated to four, however only two from the four, were from the same settlement. Cultural traditions Pronounced as Che – bup according to Elexson, he disclosed how the original religion for the Cebup was Paganism before converting to Christianity. And, while Christmas being the only festivity they celebrate, they do not have any Cebup-related celebrations, “We do hold activities at the village once in awhile before, but not anymore due to funding difficulties.” The community of Cebup implemented a hierarchy system within their longhouse. Elexson who came from a legacy of chiefman, said, “For the first class, our traditional costume uses leopard skin, while the other classes used either goat or bear skin.” Elexson also shared cultural practices during a marriage and a funeral. “With marriage, we will have a marriage dowry placed on a tepak sirih , an expensive necklace. We also practice until now ‘kuman cungai pana’ which direct translates to eat hot river.”

He clarified how the practice entails the man giving to the female’s family a parang that serves as a protection for the female’s side family, and when they accept it, it symbolises the family welcoming the man.

“Previously without religion, the Cebup figured everything needed protection.” Meanwhile, during a funeral, Elexson shared how before burying, the community representative would shoot in the air seven times using a shotgun to commemorate the death. “Seven times because they believe it is a perfect number,” Elexson giggled, he continued, “And because we live by the river, we have to bring the body to and fro the river seven times as well!” So what if one do not abide to the rules set within the community, Elexson answered, “Basically if we do not follow the taboos, we will get ‘parit’, or a curse which will affect the upcoming generation.”

Apart from that, Elexson still remembers all the taboos from his childhood memories living in the longhouse, “We have a long sword my grandfather kept, each time there is a thunderstorm and rainy season, he would cut our (among the little children living in the longhouse) hair, just several strands, he will then point it to the sky and talk to the thunder to stop.”

“The hair will be kept in front of the longhouse, but I remembered it vividly because the rain actually stop then and I would questioned it, but it could be due to belief.” Elexson who keeps a moustache shared another taboo that he remembered from his younger days, “After you cook meals, you cannot immediately bring them out of your house, worse is near the river because it will attract the river spirit, and they will come after you.” For those wanting to transport cooked meals, he said it has to be cooled down beforehand. As for Cebup delicacies, he said their staple food contains tapioca.

“We make something similar to sagu, but using tapioca, and I remembered how long the process to make it was – we filter it in the river, there is a filtration process which we put it in the long boat, and we need to ‘pijak-pijak’ (step on) it,” he laughed as he shared the memory.

Difficulties of the ethnicity Expressing his adversity towards the Cebup community, Elexson disclosed, “We are under the orang ulu category, but since there are many types, we are put under the ethnic Kenyah. I do not feel like it because comparing the both ethnicity, we are totally different in terms of dialect and culture. Even our facial features are different!” Feeling disappointed from being overshadowed, Elexson admitted many times he feels frustrated when others asked him what is Cebup, he would reply as an ethnicity under Kenyah.

“This is why I want to do something for our community, make it more known as many do not know about the minority race.” “Because of this, it is also quite difficult to conduct any activities under the community.

Even now at the village, many projects had been abandoned, even the development of our new longhouse (previous longhouse got burned down) has been stopped due to insufficient of funds.” Future plans for the Cebup community Upholding a strong devotion towards his cultural traditions and ethnicity, Elexson who saw the need to provide a sustainability towards the Cebup community, he is currently developing a Cebup language dictionary in collaboration with Dewan Bahasa dan Pustaka.

As for his future plans, “In my village, we are depending on generators for electricity, however, the fuel for it can be quite expensive, and sometimes we lack the supply so we use candle lamps. Hence, I am looking into developing a mini hydro at my village for electric generation because I found out that with electricity, you can do many things.”

With many plans in his mind, he also wishes to develop his village into an eco-tourism location, “I see the potential because in our village, we have many beautiful undiscovered spots, especially the first Cebup settlement which contains many historical values; we also have a very tall waterfall and a cave.”

The ambitious 31-year-old also mentioned how he tries to help his fellow villagers in creating workforce availability as depending only on the palm oil, paddy field, and fishing will not be enough to create a sustainable life for the people at Long Selapun. The man himself Having been living in the forest, and speaking only the language of his mother tongue, Elexson first time being in the city was when he hit the age of 20-year-old in 2006 where he arrived in Kuala Lumpur to further his studies.

“When I grew up in the village, it was an advantage that my family knew how important education is – so I just followed the pathway of education, but I never think that one day I will be a PhD holder, and a lecturer, all I knew was I wanted a better life for myself, and my family.”

Elexson Nillian known as the only one from the Cebup community to hold a double degree PhD – a Bachelor’s Degree in biotechnology from University Putra Malaysia, Serdang. He is now a lecturer at Universiti Malaysia Sarawak (UNIMAS) under the Faculty of Resource Science and Technology. “When I found out that I was the only one among the community to hold a PhD, the responsibility on my shoulder grew to bring out the people of the Cebup, it felt like I really need to do something for them.”

The easy-going Elexson hopes for the best and said before ending the interview, “We have many other minority races that are yet to be known in Sarawak. I want them to come out. In our area alone, there are also the Lirung, Seping minority race, I hope they will come out one day and try to preserve their culture’s language and traditions.”

A state, a country is made of its people – the people is what represents and symbolises the place, and through its people borned a culture and tradition that gives place its unique identity. Sarawak consists of many ethnicities – each with their own different backgrounds, and history, many of which are awaiting to be discovered.

In the end, these are what make Sarawak who she is now, and if we do not defend our roots, if we do not preserve our culture, how will Sarawak be in the future? Dr. Elexson Nillian is part of the Kamek Kitak Human Library as a Human Book. 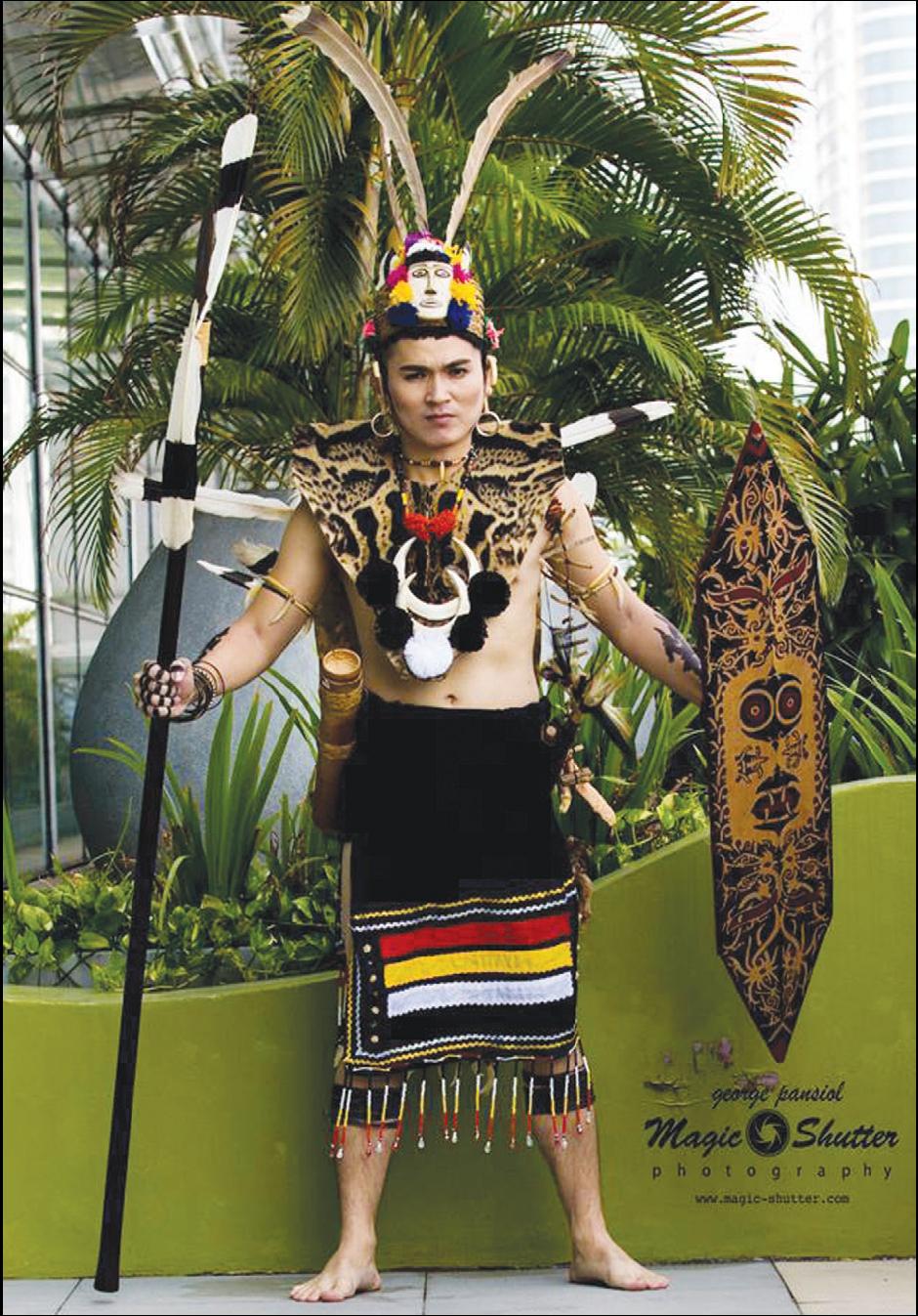 KUCHING: There is a need for a reliable, efficient and competitive transport industry for the country’s economic growth and development. Transport Minister Datuk Seri Lee...

Jail and fine for drug trio

SIBU: The energy of youth is needed to stimulate...

Covid-19 reports earn media pat on the back

MIRI: Local journalists have come in for praise for...

BY JACINTHA JOLENE KUCHING: Sarawak Tourism Board (STB) has joined...

KUCHING: All ministries and agencies in Sarawak are demonstrating...

BY JACINTHA JOLENE KUCHING: The Ministry of Tourism, Creative Industry...

BY JACINTHA JOLENE KUCHING: Sarawak Tourism Board (STB) is committed...

The last thing I ever wanted was to be...

KUCHING: There is a need for a reliable, efficient...

BY JACINTHA JOLENE KUCHING: Industry players have responded positively to...

KUCHING: Stakan will become a booming economic centre, much...

DEBAK: People here have to go to either Betong...