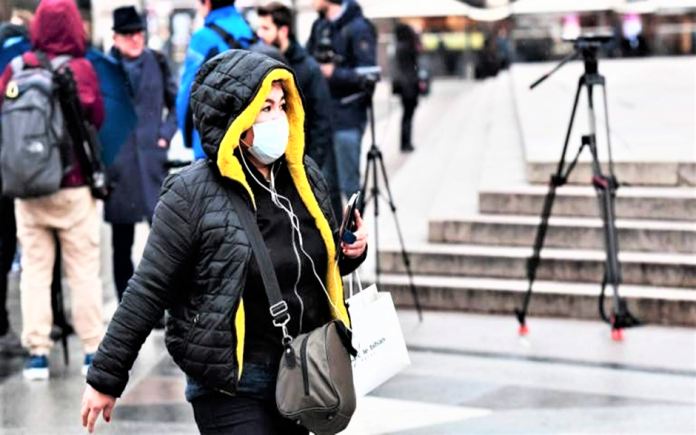 BRUSSELS: The risk for people in Europe to be infected with the Covid-19 was levelled up by the European Center for Disease Prevention Control (ECDC) on Monday, but the European Union (EU) insisted not to close the borders between its member states, reported Xinhua news agency.

According to the daily ECDC risk assessment, the risk associated with Covid-19 infection for people in the EU/EEA(European Economic Area) and UK is currently considered “moderate to high”. In its previous assessment published on Feb. 23, the assessment was “low to moderate”.

The ECDC has made the assessment on a daily basis for more than a week, since the Covid-19 outbreak was reported in Italy, where a total of 1,835 people have so far tested positive for the coronavirus.

There have been 52 deaths, while another 149 patients have recovered in the country, according to Angelo Borrelli, Italy’s Civil Protection Department chief and Extraordinary Commissioner for the coronavirus emergency.

He told a briefing late on Monday that over 23,300 coronavirus tests have been carried out since the epidemic first broke out on Feb 21 among Italians who had no links to China or any other parts of the world with ongoing coronavirus outbreaks.

Since the start of the outbreak in northern Italy, there has been a clear sign of dissemination crossing borders.

Germany reported 150 confirmed infections as of Monday morning, and cases were found in 10 out of the 16 federal states.

Despite the alarming situation, German Health Minister Jens Spahn did not consider it necessary to close German borders and stressed that the cancellation of major events or the closure of companies was generally not advisable.

The risk level of the infection in Germany was set to “moderate”.

France confirmed 191 cases with three deaths on Monday. The cases of infection increased by 61 compared to Sunday.

The French government on Saturday banned all gatherings expected to draw 5,000 people in confined spaces and some in open-air spaces too. In regions where over 10 cases of infections have been confirmed, schools remain closed until further notice and residents are recommended to limit their journeys.

Johnson said the Covid-19 outbreak is likely to become more significant in the coming days or weeks, but he urged people across Britain to go about their business as usual. At the moment the situation is at the containment stage.

Downing Street also announced a “war room” being set up and running in the Cabinet Office, nerve centre of the government, to roll out a public information campaign and respond quickly to cross-cutting issues.

In Austria, the number of people infected rose to 18 as of Monday evening. Franz Lang, director general for public security, assured that everything was under control.

“In Austria itself, routine has come,” said Lang. “Worldwide, we only notice slightly increasing numbers of over 80,000 coronavirus cases. It makes us slightly optimistic that the curve in China will flatten out.”

Finland reported a new case which brings the total figure to seven. The Finnish Ministry of Social Affairs and Health said on Monday that around 150 people, without diagnosis, are in quarantine currently in Finland.

Tuija Kumpulainen, head of Department (director general) for Wellbeing and Services at the Ministry of Social Affairs and Health, said that when the infection rate exceeds a certain percentage, Finland will stop quarantining people who have no diagnosis.

“This will be necessary to ensure that the society can continue functioning,” she said.

Following Sweden raised the risk level of identifying new cases in the country to “very high” last Friday, the country raised on Monday the risk of a general spread of the virus from “low” to “moderate”.

So far more than 20 European countries have reported Covid-19 infection cases. Measures have been taken to contain the virus on one hand, and advices have been given, on the other, to keep the normal life going.

The EU has been working to coordinate the member countries’ national measures so as to boost the overall preparedness in the bloc.

“There has been a huge amount of coordination over the last eight weeks,” said von der Leyen.

The response team will work on three parallel pillars — medical field, mobility and economy, she elaborated.

Stella Kyriakides, the European Commissioner for health issues, said invitations to tender have been sent to a number of selected companies identified through a market analysis.

During the press conference, questions were raised on whether the free movements of people were to be limited within the EU due to the epidemic concerns.

“No, this is not under consideration,” replied von der Leyen.

However, the Czech Republic on Monday joined a number of other countries to stop direct flights from affected areas including South Korea and northern Italy.

“We are stopping flights from Milan, Bergamo, Venice, Bologna of Italy and that from South Korea due to the coronavirus spread. It is currently a necessary measure to protect our citizens. Unfortunately, in Italy and South Korea the number of infected people is rising rapidly,” said Czech Health Minister Adam Vojtech on Twitter. – Bernama