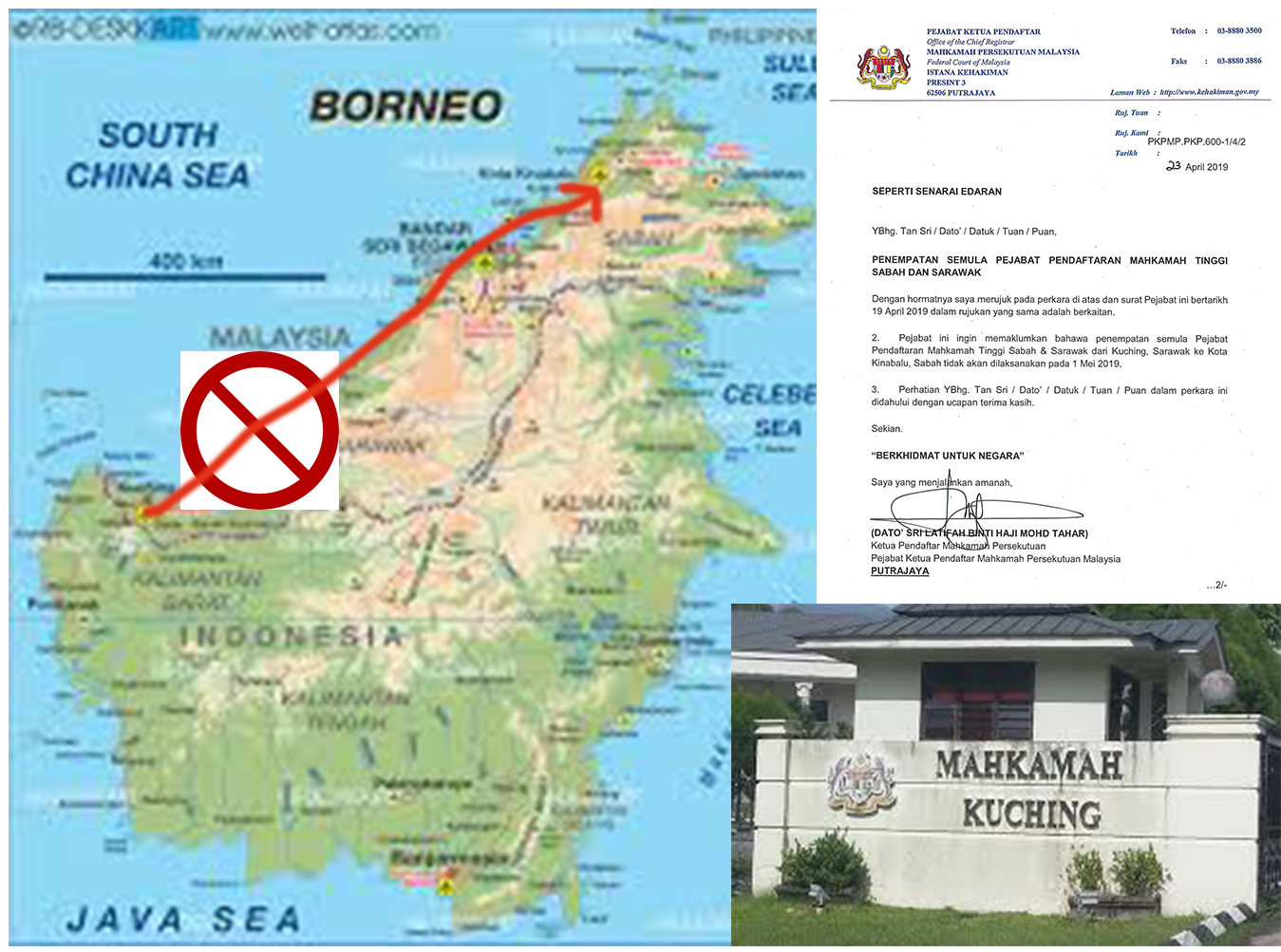 KUCHING: The plan to relocate the Registry of the High Court for Sabah and Sarawak from here to Kota Kinabalu effective May 1 has been aborted.

The registry will remain here, at least for now.

This was announced in a circular issued and signed by the Chief Registrar of the Federal Court Datuk Sri Latifah Mohd Tahar yesterday.

Latifah said the letter was issued with reference to a letter issued by the office dated April 19 pertaining to the relocation of the registry to Kota Kinabalu.

The three-paragraph letter did not give any reason for reversal of the decision.

“This office wishes to inform that the relocation of the Registry of the High Court for Sabah and Sarawak from Kuching to Kota Kinabalu will not be implemented (as announced earlier) on May 1.”

The decision to relocate the registry drew a lot of flak from Sarawak leaders and lawyers who said it was a breach of the constitution especially when both chief ministers of Sabah and Sarawak had not been consulted.

Chief Minister Datuk Patinggi Abang Johari Tun Openg had also confirmed that he had never been consulted over the matter.

On Monday, the Chief Minister’s Office issued a statement saying that the failure to consult the chief minister was a breach of Article 121(4) of the Federal Constitution.

The following are immediate responses and reactions from some Sarawak leaders and lawyers pertaining to the reversal decision.

To relocate the registry from Kuching to Kota Kinabalu without consulting the chief ministers of Sarawak and Sabah is against the Federal Constitution.

It doesn’t show much of a commitment to the rule of law, which (Prime Minister) Tun Dr Mahathir Mohammad stressed in his interview! If he or PH government is indeed committed to the rule of law, he or his minister should have referred to our Federal Constitution carefully before making decisions infringing the constitution.

It’s like “Cakap tak serupa bikin” (behaving differently from one’s word). They shouldn’t have opened their mouths before their brains are fully engaged. Because of this we’ve lost some trust in the PH government decisions and promises.

That’s why PH has made so many U-turns in their one year in power.

It’s a victory for Sarawak. There is no law preventing the relocation of the registry to Kota Kinabalu. However, Article 121(4) the Federal Constitution states that the prime minister should first consult the chief ministers of Sabah and Sarawak.

It is unconstitutional to move the registry without consulting the chief ministers.

The letter from Federal High Court yesterday stated that the relocation will not be effective on May 1.

This doesn’t mean the relocation will not happen. I assume by postponing the relocation, this will give ample time for the prime minister to consult the chief ministers. At least, this should give the Minister of Law Datuk V K Liew another chance to handle the relocation properly according to the law.

That being said, relocation will increase the legal costs for clients in Sarawak.

And I still view the federal government’s move as arrogant and disregardful of Sarawak’s rights under to the Federal Constitution.

If we let it pass this time, there will be more erosion of Sarawak’s rights to come. Kudos to Sarawakians – they voiced out and defended their rights. It is a victory for Sarawak.

Too early to celebrate. Anyway, thank God. The hurdle created by the Constitution remains unresolved.

We are dealing with an unfriendly lot in the federal government. There is no end to things to show us that we are not at their beck and call. Last time people said all the bad things about Barisan Nasional (BN). But now some supposedly more liberal-minded lawmakers are behaving like spoilt kids who couldn’t get their way.

Honestly, I do not know what they are up to. Perhaps, the MPs from Pakatan Harapan (PH) in Sarawak are able to tell us more.

All decisions affecting Sarawak should be made in consultation with Sarawak.

More attention should be paid to improving the lives of the people – not to making unilateral decisions that cause conflict, only to U-turn later.

It is good to learn that the relocation of the registry will not be implemented on May 1.

We salute the authorities for listening to the voices and cries of Sarawakians. Our association wants the authorities to strictly follow Article 121 (4) of the Federal Constitution to consult the chief ministers of Sarawak and Sabah in case they want to relocate the High Court Registry.

As Malaya, Sabah and Sarawak are of equal status, we urge the authorities to appoint a Chief Justice of Malaysia not only from Malaya but Sarawak and Sabah as well. In this way, everyone in Malaysia will be happy.

Equal status means equal financial allocations to Malaya, Sabah and Sarawak. And not divided between the 13 states but between three equal partners.

The authorities need to encourage public universities in Sabah and Sarawak to conduct Bachelor of Law (LLB) too so that we can learn about local cultures.

The cost for Sabah and Sarawak students who aspire to be lawyers is high as they need to study in Malaya or private colleges.

We hope the authorities abide by MA63 to provide equal partnership and status.

Meanwhile, Sarawak Pakatan Harapan (PH) also supported the decision not to go ahead with the proposed relocation.

“Sarawak Pakatan Harapan is on the same page and position as the Sarawak state government that the decision for the relocation has to be put on hold or even withdrawn,” he said in a statement.