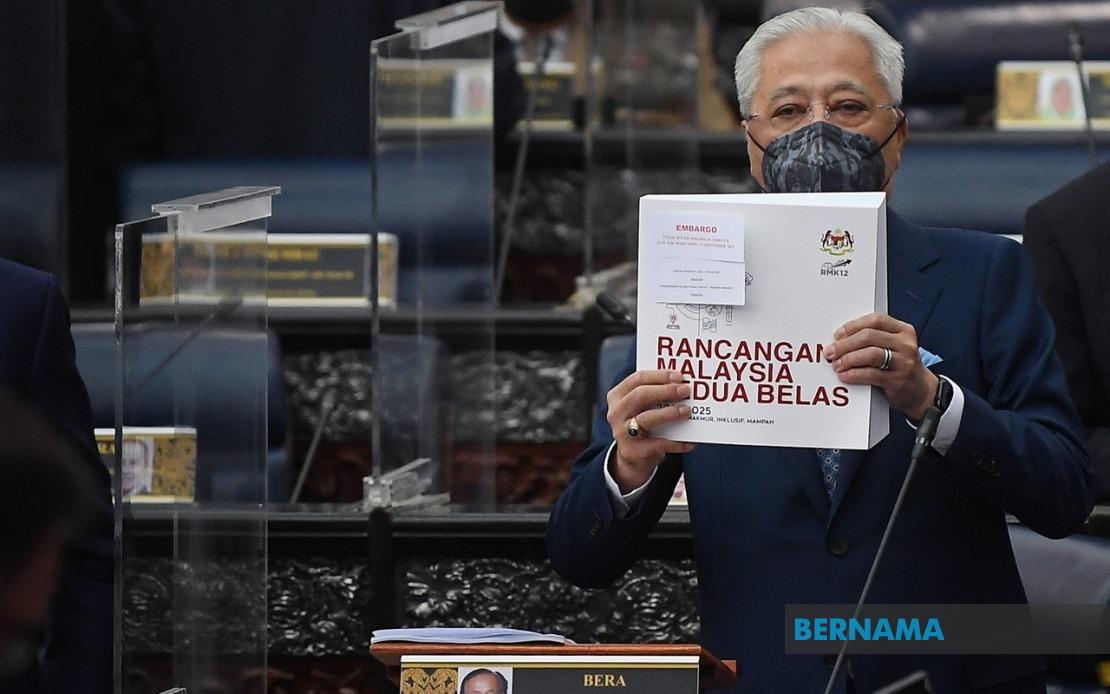 *With the objective of ‘A Prosperous, Inclusive, Sustainable Malaysia’, the 12MP focuses on efforts to boost economic growth and ensure a more equitable distribution of the country’s wealth as well as environmental sustainability.

* The government will allocate RM400 billion to finance extension projects and new projects under 12MP.

* There are four main goals in the 12MP:

iii. Improving the well-being of the Malaysian Family.

vii. Accelerating the development of Sabah, Sarawak and the less developed states.

* Several plans and targets are outlined in the 12MP that will be carried out and achieved during the implementation period of the plan from 2021 to 2025. Among them:

– An investment loan fund for research and development in aerospace, electrical and electronic fields as well as the establishment of the Centre of Excellence for Future Industry.

– Intellectual property funds and a financing scheme for digitisation and adoption of technology to support local companies in the transition to advanced technology.

– The provision of digital infrastructure, involving public and private sector investment, worth RM28 billion to improve the existing 4G network.

– Another RM15 billion will be invested by the private sector to accelerate the implementation of 5G nationwide.

– As much as 50 per cent of the government’s research funds will be provided for experimental research that has the potential to be commercialised.

– The establishment of a one-stop centre for commercialisation and technology transfer as well as the NanoMalaysia Energy Storage Technology Initiative (NESTI).

– The establishment of a Research Management Unit (RMU) to coordinate research and development and commercialisation and innovation activities.

–  The Klang Valley Double Tracking Phase One from Rawang to Salak Selatan, which is expected to be completed in 2022.

– The Gemas-Johor Bahru Electrified Double Track project, the last stretch of the electrified double track from Padang Besar (Perlis) to Johor Bahru (Johor), which is scheduled for completion in 2023.

– The East Coast Rail Link (ECRL) project, which is being continued and expected to be completed in 2026.

– The Rapid Transit System (RTS) project connecting the Bukit Chagar station in Johor Bahru with the Woodlands North station in Singapore, which will be built at the end of 2021.

– West Coast Expressway running from Selangor to Perak, which is expected to be fully completed in 2024.

– The Central Spine Road from Bentong (Pahang) to Kuala Krai (Kelantan), which is scheduled for total completion in 2025.

– The Kota Bharu-Kuala Krai highway in Kelantan, which is expected to be fully completed in 2025.

– A facilitation fund for infrastructure projects will be established under the Public-Private Partnership (PPP) 3.0 model.

– A special PPP committee chaired by the Chief Secretary to the Government will be established to enable PPP project consultations to be completed within a year.

–  Four school complexes and five new schools will be built at a cost of RM848 million.

– A centralised database for Technical and Vocational Education and Training (TVET) supply and demand will be developed.

– Graduate Marketability Strategic Plan 2021-2025 is introduced to address the issue of mismatch in the labour market.

–  Job Creation Strategic Plan 2021-2023 will be introduced to enable the country to produce a more resilient and highly skilled workforce in fulfilling industry needs.

– A Malaysian Infectious Disease Institute will be built in Bandar Enstek, Negeri Sembilan in 2022, aimed at the prevention of diseases, infirmities and deaths caused by infectious diseases.

– The government has identified proactive measures to improve hospital preparedness to achieve a ratio of 2.06 hospital beds per 1,000 residents by 2025.

– 500,000 affordable houses to be built under the 12MP to increase the opportunities for the B40 and M40 groups to own homes.

– The government has allocated RM2.25 billion to provide housing assistance to the poor under the Housing Assistance Programme.

– The government will strengthen the Ops Benteng through the implementation of several projects, including the Marine Police Sea Monitoring System in five maritime territories as well as the construction of the Royal Malaysian Air Force Bare Base in Bintulu, Sarawak, the construction of the Armed Forces Hospital in Terendak, Melaka and improvement of maritime assets.

– The new army camp in Felda Sahabat, the Fifth Brigade Camp in Kota Belud and the General Operations Force camp in Beluran, Sabah, will be completed during the 12MP period.

– The National Defence and Security Industry Policy will be introduced to set the direction of local industries related to defence and security.

– A total of 10,200 housing units for military personnel and quarters are being built and can be occupied in the 12MP period.

–  A special unit at the federal and district office levels will be established in tackling the issues of poverty and income gaps among the people.

– The Urban Community Economic Empowerment Programme and the People’s Wellbeing Development Scheme in rural areas, costing RM1.5 billion, will continue to be strengthened to increase the marketability, well-being and purchasing power of B40 families.

– The provision of the Bumiputera Prosperity Fund and the Express Contract Financing Scheme under Majlis Amanah Rakyat (Mara) will be introduced.

– A wakaf (endowment) fund will be created at the national level to mobilise more resources for entrepreneurship and to fund Bumiputera socio-economic development programmes.

– A comprehensive Orang Asli socio-economic development plan is being drawn up covering aspects from increasing income and well-being to basic infrastructure.

– The Kampung Baru Residents Special Loan Scheme will be improved to enable those with low incomes to expand their business and engage in entrepreneurship.

– The Malaysian Youth Development Academy and several youth and sports complexes will be upgraded while the first regional youth centre in Malaysia will be built to boost youth activities.

– The persons with disabilities (PwD) group will be further strengthened through the implementation of job coaching programmes, rehabilitation in the community, independent living centre services, PwD entrepreneurship programmes and special career carnivals.

– Women’s participation in the job market is targeted to reach 59 per cent by 2025.

– The provision of basic infrastructure in Sabah and Sarawak will be expanded by building bridges and upgrading 1,400 kilometres (km) of paved rural roads as well as completing the construction of 1,150 km of the Pan Borneo Highway.

– The construction of the Baleh hydroelectric project in Sarawak is expected to be completed in 2025.

– The construction of 26 new clinics will be able to improve healthcare services in rural clinics in Sabah and Sarawak.

– New border control posts will be built in Manalunan, Simanggaris, and Kalabakan, Sabah, while the Tebedu and Serikin Immigration, Customs, Quarantine and Security (ICQS) complexes in Sarawak will be upgraded.

– The road project from the Ba’kelalan Border/CIQ Complex to Lawas will begin construction in 2022.

– Rural infrastructure will be further enhanced by building and upgrading 2,800 km of paved roads.

– Small rural projects will continue to be implemented such as the Social Amenity Programme with an allocation of RM310 million and the construction of rural roads at a cost of RM1.6 billion.

– The housing development model based on the self-build concept will be re-introduced, with the second generation to be offered standard house sites and designs by the government.

– A comprehensive National Energy Policy will be introduced to provide a long-term strategic direction to support the aspiration of a carbon-neutral nation.

– Cleaner electricity generation will also be implemented through the operation of several gas power plants in Peninsular Malaysia to replace coal-fired power plants.

– Renewable energy generation from solar, biomass and biogas is targeted to increase to 31 per cent of the total installed capacity by 2025.

– A cyclical economic model will be implemented under the 12MP to reduce pollution, waste generation and dependence on natural resources.

– A total of 120 cities are expected to achieve sustainable city status by 2025.

– The Green City Action Plan and a multi-dimensional big data analytic system will be introduced.

– The government will give priority to the development of the energy-efficient vehicles (EEV) production industry to support environmentally friendly mobility initiatives.

– The government will introduce a blue economic blueprint to determine the development direction of coastal and marine areas.

– Several projects under the flood mitigation programme, integrated river basin management, and coastal erosion control as well as flood forecasting and warning at a cost of RM16 billion will be implemented under the 12MP and 13MP.

– The government is targeting end-to-end online services to increase to 80 per cent by 2025.

– A national data governance policy framework will be developed to encourage greater data sharing between the public and private sectors.

– A Malaysian Governance Index will be introduced to measure the performance of government machinery in delivering services to the people.

– The 12MP Policy Implementation Plan is provided as a guide for ministries and agencies in leading and implementing all policies. – Bernama

Highlights of the 12th Malaysia Plan