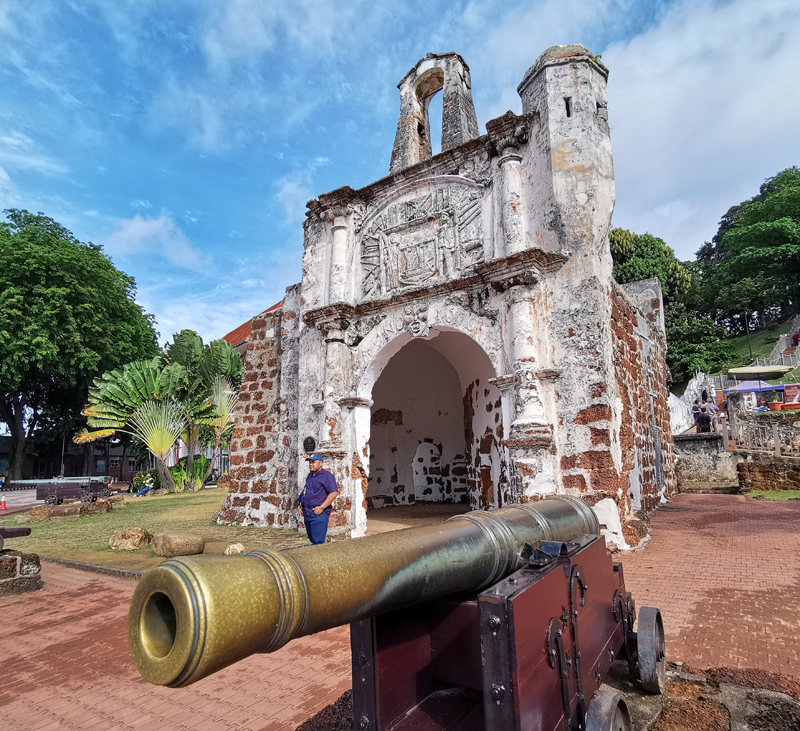 Melaka is renowned for its unique historical and cultural heritage, with influences from the Portuguese, Dutch and British. It was designated as a UN

Pandemic fails to dampen love for durians
Heart of glass: Why are smartphones made with such fragile materials?
Banksy work stolen from outside Pompidou Centre

Melaka is renowned for its unique historical and cultural heritage, with influences from the Portuguese, Dutch and British. It was designated as a UNESCO World Heritage Site alongside Georgetown, Penang in 2008. Despite being one of Malaysia’s smallest states, this quaint little port city in Malaysian is a popular weekend destination for many locals and foreigners due to its colourful history and its laid back environment — which provides the perfect setting to recharge and relax while still enjoying all the conveniences of city life.

A city of glorious past

Melaka (Malacca) City, which is the Capital City of the State of Melaka on the West Coast of Malaya, has a history of over 500 years, dating back to the 1600’s.

This historical city has been declared by UNESCO as a Heritage City (together with George Town of Penang) on July 7, 2008, due to its exceptional example of a multi-cultural trading town between the East and the West, along the Straits of Melaka, and as a living testimony to multi-cultural heritage that is well preserved.

I was in the city for a holiday tour recently, after my first visit there decades ago.

Walking along the streets, I could see the word ‘Melaka’ being used not only in the Bahasa Malaysia version but also in the English version of the names for the streets and buildings.

My tourist guide, Liu Y P, explained that the State Executive Council officially announced in May 2017, that the spelling of “Malacca” would cease to be used and be exclusively replaced by “Melaka” in its English version (or other languages), in order to standardise the name to avoid confusion, especially among foreign tourists.

Within the city, visitors could see the vintage government buildings, churches, squares, and fortifications, with their architectural and cultural designs being well preserved. This is strong evidence of its early history, dating back to the 15th-Century Malay sultanate, the Portuguese and Dutch periods beginning in the early 16th century.

For example, the Dutch government in the 1650’s built the Stadthuys, or the Town Hall Building, commonly called the Red Building, after they took over Melaka from the Portuguese in 1641. It’s believed to be the oldest Dutch building in Southeast Asia; it now serves as the History and Ethnography Museum.

The Red Square (Dutch Square), located in the heart of the city on Jalan Laksamana, is flanked by a number of red-painted structures, including the Town Hall Building, Christ Church Melaka (1753), the Melaka Art Gallery, and the neighbouring shophouses. The Queen Victoria Fountain, which was constructed in 1901 to honour Queen Victoria’s diamond jubilee, is located in the centre of Red Square. The Tang Beng Swee Clock Tower, which bears the name of a Chinese tycoon, is situated nearby. It is also known as the “Red Clock Tower”.

The Melaka Art Gallery is located next to Christ Church. It was originally built in 1784 as a school and a Dutch Administrative Complex before being transformed into the Malaysia Youth Museum and Art.

Next to the Red Square is St Paul’s Hill. Our guide showed us the Melaka Tree (scientific name: Phyllanthus Emblica), from which Melaka got its name, according to a legend.

We also visited the remains of the St Paul Church on top of the hill, first built by the Portuguese in 1521 and dedicated to the Virgin Mary, making it the oldest of its kind in Malaysia and Southeast Asia.

The church’s function was replaced by Christ Church Melaka in 1753.

What remains of the main building of the church is the dilapidated walls and floor, without the roof. Some old tombstones excavated from the vicinity of the church are now being displayed at the foot of the walls.

In front of the ruin church is a defunct lighthouse built in 1849 and the statue of St. Francis Xavier, erected in 1952.

From the hill, we could get a view of part of Malacca City by the Strait of Malacca and the prominent Taming Sari Rotating Tower. The 110-meter-tall tower has a revolving viewing platform that takes visitors 80 metres above the ground for a panoramic 360-degree view of the city.

We descended from the other side of the hill to visit the most iconic tourist landmark in Melaka, the A Famosa or Porta De Santiago. It is one of the oldest surviving European structural remains in Southeast Asia. What we can see today is the gate of what remains of the former mighty fortress built by the Portuguese in 1511.

Many of the old architectural designs of shophouses in the old streets of Malacca City are well preserved and have become tourist attractions.

At the Jalan Tun Tan Cheng Lock, we visited the Baba and Nyonya Heritage Museum, housed in three units of terrace houses that showcase the rich cultural and architectural heritage of the Baba and Nyonya (also known as Peranakan) families, dating back to the 19th and 20th century.

The owner, from the Chan family, acquired the heritage home in 1861, and four generations of the Chan family had been staying there until it was turned into a heritage museum and opened to the public in 1985.

The most prominent member of the family, Chan Cheng Siew (second generation), was responsible for most of the interior decorations that we can see in the museum today.

At a restaurant run by the Peranakan Seet family on Jalan Parameswara in Malaka, we also had the chance to sample real Baba and Nyonya cuisine.

The cuisine’s distinctive features are its strong aroma and richness in flavours, whether they are sweet, sour, salty, or spicy.

As we travelled the city, we noticed numerous beautifully decorated trishaws transporting visitors who wanted to take their time and see the heritage city. On a subsequent trip, perhaps we should give it a shot.