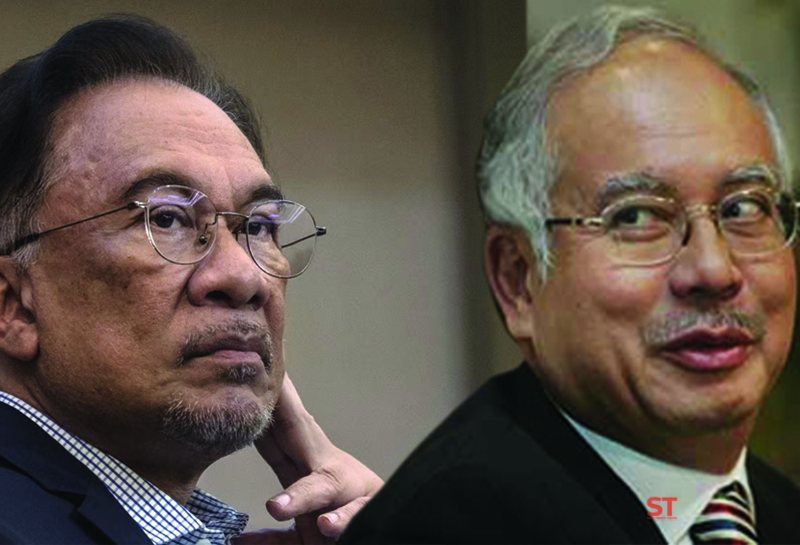 WE do not often have the opportunity to witness a public debate between political figures on the government side and the opposition in this country.

Some ESP on the ESG
Potemkin democracies
What’s next for UMNO?

WE do not often have the opportunity to witness a public debate between political figures on the government side and the opposition in this country. So, when two of them agree to a debate, it certainly attracts the people’s attention.

Former prime minister, Datuk Seri Najib Razak, and opposition leader Datuk Seri Anwar Ibrahim have agreed to debate each other at 9pm on May 12. The venue is the Malaysia Tourism Centre (MaTiC). We hope this debate is broadcast live on the national television networks.

It should be noted that since falling from the helm of the country’s administration in 2018, Najib had challenged veteran Democratic Action Party (DAP) leader Lim Kit Siang and Bersatu leader Tan Sri Muhyiddin Yassin to a debate. But this time the opportunity is limited, so Najib needs to make the most of it to show his mettle to his political arch rival and the public.

Remember the debate between Anwar and Information Minister Datuk Ahmad Shabery Chik on 15 July 2008? The title of the debate was ‘Today form the government, tomorrow prices of fuel will go down’.

That one-hour-long debate moderated by Tan Sri Johan Jaaffar was the first between an opposition leader and a member of the Cabinet. It was broadcast live on several national television networks and gained a lot of attention.

I have analysed the propositions and rhetoric used by the debaters and presented the study in Kota Kinabalu, Sabah some time ago. I concluded that Anwar defeated Ahmad Shabery in that debate. His arguments were more convincing and it was obvious that he had mastery over the facts. Linguistically, Anwar was also more skillful, which was an advantage when he presented the facts.

By contrast, Ahmad Shabery wasted time and opportunities by hurling personal attacks and insults at Anwar — something debaters should not do. His performance was not only extremely disappointing; he failed to convince the audience using sound arguments based on facts and proper reasoning. In fact, he looked awkward and nervous whereas Anwar looked confident, cool and collected.

Then there were DAP leader Lim Guan Eng’s two debates with his main rivals from the Malaysian Chinese Association (MCA). The first time was with the then MCA President Chua Soi Lek in 2012. The second one was with Chua’s successor Wee Ka Siong last year. It was on cabotage policy.

When he was prime minister in 2017, Najib and his wife visited Anwar in hospital. In 2020, Najib also expressed support for Anwar as a candidate for prime minister.

In their debate they will discuss Sapura Energy Berhad (SEB) whose loss of RM8.9 billion last year sparked a dispute between Rafizi Ramli (Parti Keadilan Rakyat vice-president) and Najib that led to tonight’s debate.

Najib wants the company bailed, but the idea was opposed by Rafizi who argued that the funds could be used for better purposes.

Will the debate this time garner the interest of the people just like the debate between Anwar and Ahmad Shabery? Whatever the case, this debate will enable the people to evaluate the arguments and views presented. Differences of opinions in such a setting should be celebrated because it is one of the signs of a mature democracy.

Will the debate bring about the desired results? Yes. It will highlight the truth regarding the company’s losses. More importantly, though, the debaters should not use the occasion to promote their personal agendas or political parties.

Specifically, they should not stray from the topic of the debate to reposition or strengthen their respective image and reputation. It should be remembered that Najib, who is now known as ‘Bossku’, is being weighed down by big controversial issues while Anwar’s standing has been tarnished by PKR’s defeat in three state elections — in Melaka, Sarawak and Johor.

Unlike a school debate, this debate is not meant to show who is smarter. The issue at hand is whether or not Sapura Energy should be saved by the government.

While Najib is in favour of government intervention in the matter, Anwar will present counter-arguments as to why the government should stay out. Presumably, the third party in this — the audience — will be mainly interested in the points presented by the debaters and how well the arguments are put forward.

A discourse needs to be reciprocated with a counter-discourse containing concrete, convincing facts and data. Personal attacks, insinuations and going out of topic are not welcomed.

Do remember that this level of debate concerns issues of interest to large corporations and the government and involves two major national political figures. We expect well-thought-out ideas and views from them to help lessen uncertainty or ambiguity over the issues in question.

Hence, the use of aids such as testimonials, examples, illustrations, anecdotes, statistics and analogies are very important. To break each other’s arguments, they need to come up with propositions and supporting points to make their arguments more concrete and convincing. This is where quick thinking and the vastness of knowledge are very important.

To counter an opponent’s argument, a debater needs to think critically and analytically and know what data, facts and arguments to use. Criticism in conjunction with rational and objective analysis can provide enlightenment on an issue. So, the debaters need to focus on the main topic of the debate. There is no room for nonsense.

How debaters utilise techniques and elements of rhetoric is also important. In this respect, Anwar, who is a great orator, has an advantage. He could combine appropriate rhetorical and persuasive techniques, including rhetorical questions, hafifora, repetition, anaphora, triad or tricolon, comparisons, proverbs and others. It should be noted too that there are about 20 rhetorical techniques that can be utilised by a debater to ensure that his argument can be presented clearly, effectively and convincingly.

Since a debate is a form of public speaking, how the debaters use their body language will also affect the perception of the audience. So, facial expressions, hand gestures, voice intonation and so on also play a role.

We want the two leaders to conduct themselves in a professional and objective manner that would result in a high-quality debate befitting their socio-political standing in the country. They should refrain from devaluing the debate by attacking each other or their parties. Let the audience be the judge as to whose arguments are more sensible and convincing based on ideas, comments, views and analysis tomorrow night.

Dr Jeniri Amir is a Senior Fellow of the National Council of Professors.

•           Focus on Malaysia’s future in terms of its economy, politics and direction

•           Embarked on his political career in the late 1960s at the University of Malaya in Kuala Lumpur, where he became the Malaysian Islamic Youth movement (ABIM) student leader.

•           Hold many government posts in the late 20th century before being jailed for corruption in 1999.  His political career was again interrupted when he was convicted of sodomy in 2014 and imprisoned until 2018.

•           Najib was elected to the Parliament of Malaysia in 1976, at the age of 23, replacing his deceased father in the Pahang-based seat of Pekan. In the same year, he was appointed the head of UMNO Youth’s Pekan branch and became a member of the youth wing’s executive council. In the early years of his political career, Najib took on a deputy minister role in 1976, and between 1982 and 1986, he was the Menteri Besar of Pahang.