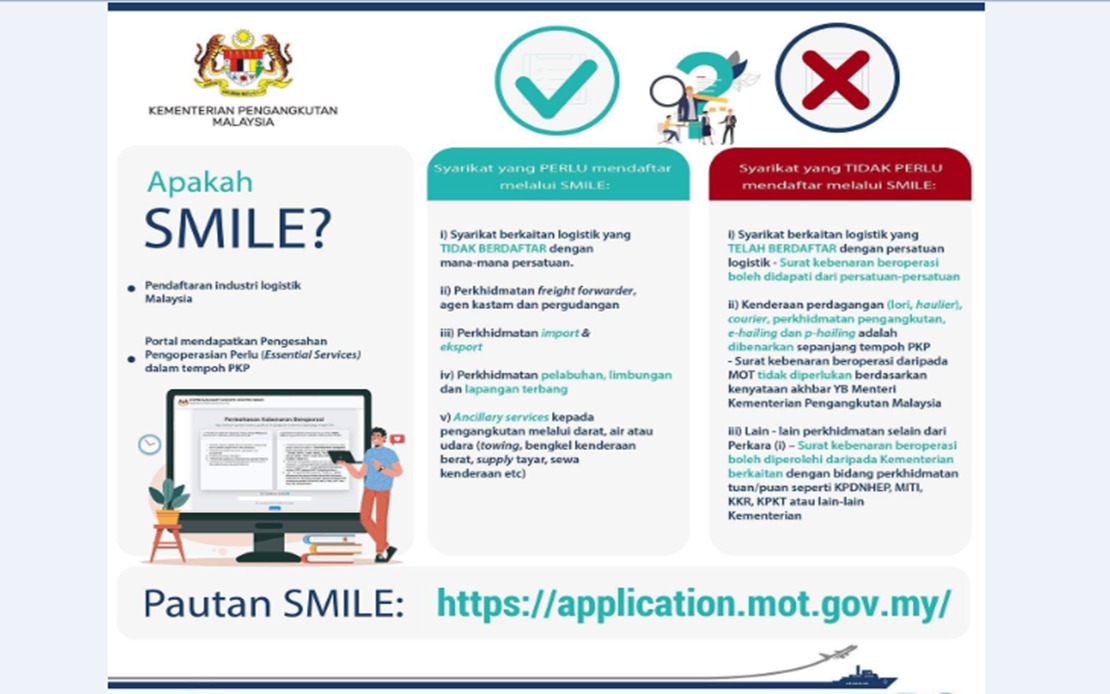 PUTRAJAYA: The Transport Ministry (MOT) will issue new approval letters to allow companies registered under the SMILE system to operate during the first phase of the total lockdown as the previous approval letters are null and void.

MOT, in a statement today, said the new approval letters are now available for download at https://application.mot.gov.my/.

The SMILE system (Sistem Maklumat Industri Logistik) is reserved for logistics and commercial transportation sector companies which include air and maritime transportation, courier services and warehousing during the movement control order (MCO) period.

On the standard operating procedures (SOPs) during lockdown, the ministry said only two people, including the driver, were allowed at one time in private vehicles, taxis and e-hailing vehicles, regardless of capacity.

However, three people including the driver were allowed at one time in the event of medical needs, such as hospital visits with a doctor’s letter or vaccination as validated with the MySejahtera application, or for security reasons, it said.

However, passenger airlines were exempted from this requirement due to the already low passenger levels, it added.

“All operators are allowed to determine their respective optimum service frequencies to prevent crowding on terminals, platforms, and stations, and ensure full compliance to National Security Council (MKN) and the Health Ministry (MOH) standard operating procedures,” it said.

For the logistics sector, MOT said companies related to land, sea and air transportation and handling of goods including e-commerce businesses were allowed to operate at optimum levels.

Vehicle workshops and tyre shops, which are not under the ministry’s purview but related to transport and logistics sectors, were also allowed to operate, it added. – Bernama

Government extended Wage Subsidy Programme due to its effectiveness