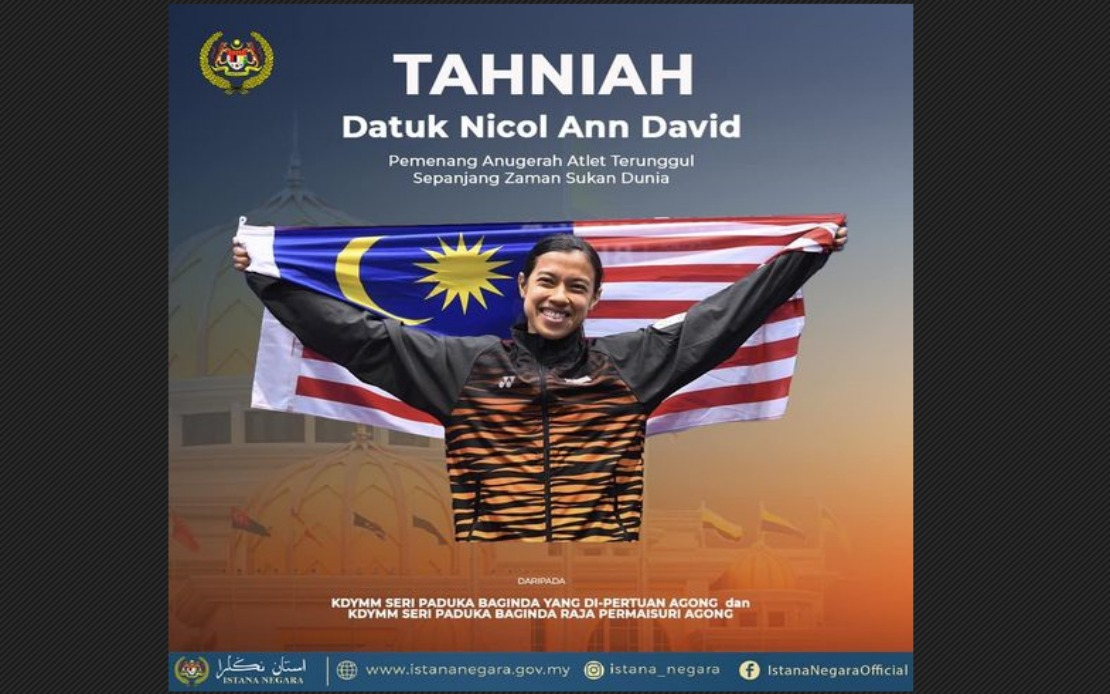 His Majesty also expressed his joy and pride over the achievement which inadvertently helped Malaysia to shine on the global stage.

“This success proves that Malaysia is capable of producing high-quality, high-calibre and world-class athlete and individuals.

“It also proves that with commitment, strong fighting spirit, hard work and determination, Malaysians can compete and succeed on the global stage,” he said in a posting shared on Istana Negara’s official Facebook page today.

The 37-year-old Penangite who remained at the top of PSA World Rankings for 109 consecutive months, received the coveted award, defeating 23 other athletes after garnering the highest votes via an online poll on the official World Games website https://www.theworldgames.org.

As the sole Asian candidate, Nicol proved to be in a class of her own since the first day of voting on Jan 8 when she received 318,943 votes, leaving her closest challenger James Kehoe, a tug of war athlete from Ireland with a 200,000-vote advantage.

The poll is aimed at naming the all-time greatest athlete among the best athletes representing various sports from all editions of the World Games since it was first held in Santa Clara in the United States in 1981.

Al-Sultan Abdullah also described Nicol’s achievement as a very meaningful success story and a morale booster for all Malaysians during this war against Covid-19.

The Agong also expressed congratulations and highest appreciation to Nicol’s parents, Desmond David and Ann Marie David, for their sacrifices and determination in making her the world’s greatest in squash.

His Majesty also hoped that Nicol’s success would inspire all Malaysians to work hard to create their own success stories in any field either at the national or international levels.

Al-Sultan Abdullah also wished the eight-time world champion all the best and may she be blessed with continued success. – Bernama