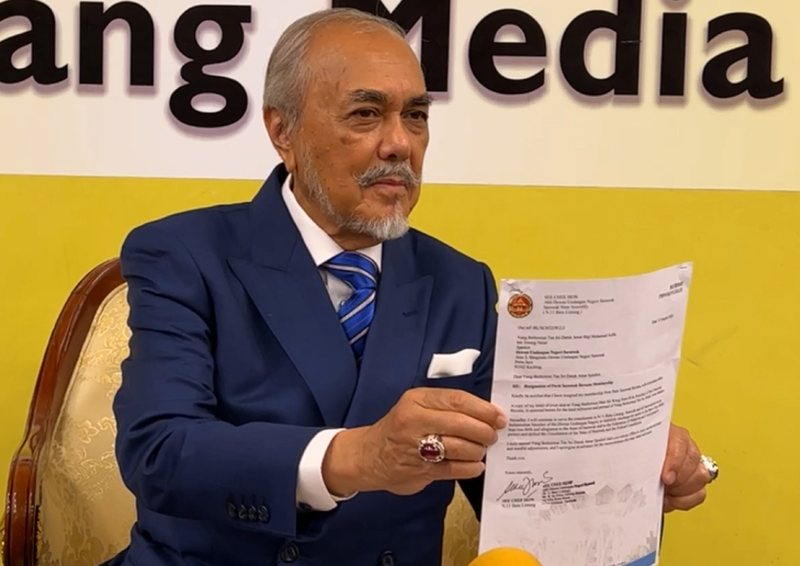 KUCHING: Opposition Parti Sarawak Bersatu (PSB) has suffered a blow after long-serving Batu Lintang assemblyman See Chee How ditched the party to serve as an Independent member of the state legislative assembly.

In his resignation letter to the party president, a copy of which was extended to Asfia, See did not cite any reason for leaving the party on whose ticket he had contested the Batu Lintang seat in the 12th state election late last year.

But Asfia said made it clear that See had not resorted to party-hopping and only resigned as a member of PSB hence, making him an Independent.

With See’s exit PSB is now let with three seats in the assembly with another opposition party DAP holding two.

“Following Chee How’s resignation, this reduces the opposition from six members to five with one independent,” said Asfia

“With his (See) resignation as a member of PSB, the seat arrangement of party members in the assembly is 76 from Gabungan Parti Sarawak (GPS), PSB (3), Democratic Action Party (2), and one Independent.

In the press conference Asfia expressed confidence that See would be able to continue performing well as an elected representative.

“I find See to be personable, brilliant, and competent. He is erudite in presenting his views and opinions in the Dewan.

“He was a member of the Consultative Committee in advising the Dewan on Malaysia Agreement 1963 (MA63).

“I wish him well and I am confident that he can discharge his duties and responsibilities as a member of the assembly and his contribution to his constituency and to Sarawak,” he said.

The letter by Chee How reads as follows:

“Kindly be notified that I have resigned my membership from PSB, with immediate effect.

“A copy of my letter of even date to Yang Berhormat Datuk Seri Wong Soon Koh, president of PSB is annexed herein for the kind reference and perusal of Yang Berhomat Tan Sri Datuk Amar Speaker.

“Hereafter. I will continue to serve the constituents in N.11 Batu Lintang, Sarawak and all Sarawakians as an independent member of the DUN, to faithfully discharge my duties to the best of my ability, bear true faith and allegiance to the State of Sarawak, and to the Federation of Malaysia and I will preserve, protect and defend the Constitution of the State of Sarawak and the Federal Constitution.

“I fully entrust Yang Berhormat Tan Sri Datuk Amar Speaker and your Office to carry out the necessary and needful adjustments, and so forth.”

Asfia said the latter did not specify why he resigned from the party in the letter.

“Not to me. I read out the letter and that is what the letter said and nothing more. He didn’t say why he resigned from the party,” he said.

Chee How is currently serving his third term as Batu Lintang assemblyman.

He was previously vice chairman of Parti Keadilan Rakyat (PKR) Sarawak until his sacking from the party in April 2020.

In the last 12th State Election, he managed to defend his seat after securing a total of 4,420 votes.