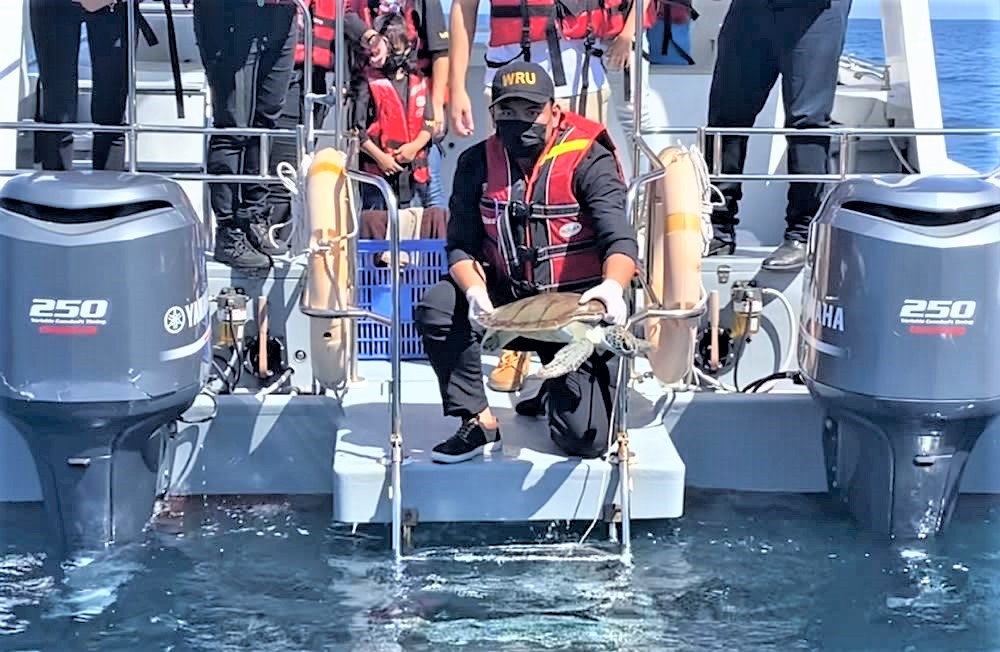 KOTA KINABALU: A female green sea turtle called Klowyi, suffering from floater syndrome and rescued by a Samaritan from Kudat Turtle Conservation Society about a month ago, has been released back into the sea today after making a full recovery.

Sabah Wildlife Department assistant director, Dr Sen Nathan, said that after a month of receiving daily care and attention at the hands of wildlife veterinarians, Klowyi, saved from near-certain death and nursed back to health, was released back into the sea today.

“A month ago, the turtle was spotted floating and unable to dive into the sea. Turtles with floater syndrome, a condition caused by excess accumulation of gas in the body, could not dive for food or protection.

“Thus, they are susceptible to injuries from a boat’s propellers, and most turtles in Klowyi’s position would likely to die from a boat strike, or eventually from malnutrition,” he told reporters here today.

Sen said that floater syndrome was not a disease, and it was developed as a result of some other cause or causes, where for one reason or another, gas accumulates in the gut and body cavity of a sea turtle rendering it unable to dive.

He added that the condition might be due to ingestion of plastics that causes an obstruction and accumulation of gas in the coelomic cavity, bacterial or infections of the intestines and lungs.

“A procedure called coelomocentesis was performed to release air from the body cavity, and a total of 3.5 litres of air was released.

“After few weeks of monitoring and treatment at Clownfish Discovery Centre, Shangri-la Tanjung Aru Resort and Marina, Klowyi was certified healthy and ready to be let back into the wild,” said Sen.

Sen said that the team from the department and the Shangri La’s Tanjung Aru Resorts and Marina accompanied Klowyi as they released her back into the wild.

Meanwhile, Shangri-La Tanjung Aru Kota Kinabalu general manager, Timothy Sainsbury, said that the resort was delighted to have been able to play a part in the month-long treatment of the turtle, and his team are inspired by the efforts put into rescuing Klowyi.

He said that under the Sanctuary — Shangri-La’s Care for Nature programme, the resort has been running a marine conservation programme for seven years to assist with the preservation and protection of the Tunku Abdul Marine Park, and species such as the clownfish.

“Overseen by the resort’s marine biologist, the project involves guided snorkelling tours, coral planting and local awareness programmes at its Clownfish Discovery Centre, for schools and the local communities in the area,” he said. – Bernama