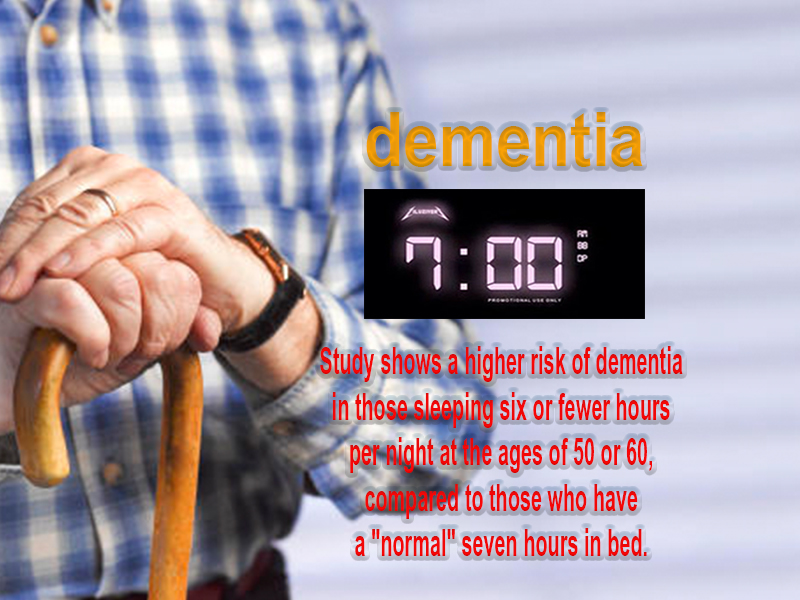 PARIS: Sleeping six hours or less per night in your 50s and 60s is associated with an increased risk of dementia, according to a new study of nearly 8,000 British adults followed for more than 25 years.

Scientists said that while the research, which was based on data from a long-running survey, could not prove cause and effect, it did draw a link between sleep and dementia as people age.

The study, published Tuesday in the journal Nature Communications, showed a higher risk of dementia in those sleeping six or fewer hours per night at the ages of 50 or 60, compared to those who have a “normal” seven hours in bed.

There was also a 30 percent increased dementia risk in those with consistently short sleeping patterns from the age of 50 to 70, irrespective of cardiometabolic or mental health issues, which are known risk factors for dementia.

The study authors from the French national health-research institute INSERM analysed data from a long-term study by University College London, which has followed the health of 7,959 British individuals since 1985.

Participants self-reported their sleep duration, while about 3,900 of them also wore watch devices overnight to confirm their estimates.

Nearly ten million new cases of dementia, including Alzheimer’s disease, are counted each year worldwide, according to the World Health Organisation, and disrupted sleep is a common symptom.

But a growing body of research suggests sleep patterns before the onset of dementia could also contribute to the development of the disease.

Time spent sleeping is linked to dementia risk in older adults — 65 years and older — but it is unclear whether this association is also true for younger age groups, according to the authors.

They said future research may be able to determine whether improving sleep patterns can help prevent dementia.

“Many of us have experienced a bad night’s sleep and probably know that it can have an impact on our memory and thinking in the short term, but an intriguing question is whether long-term sleep patterns can affect our risk of dementia,” Sara Imarisio, Head of Research at Alzheimer’s Research UK told Science Media Centre.

She said that while there is no magic bullet to prevent dementia, evidence suggests that not smoking, drinking in moderation, staying mentally and physically active and eating well are among the things that can “help to keep our brains healthy as we age”. – AFP

De-stress with a sip and paint session