BINTULU: “Nothing to comment, but we’ll take the challenge.” These were the words of Chief Minister Datuk Patinggi Abang Johari Tun Openg (pic) yesterday when asked to comment on Parti Sarawak Bersatu (PSB) president Datuk Seri Wong Soon Koh’s statement that his party will be going all out to win the majority of seats in the next state election. 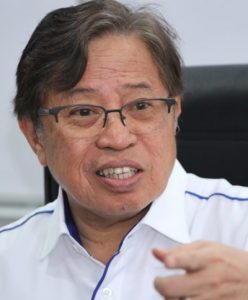 “(If he said so) let him,” he told reporters after a grand ceremony prior to the commencement of work on Bintulu-Kemena Bridge.

He was obviously not in the mood to talk about Wong’s statement, but as usual his wit did not let him down.

“Orang jual kita meli lah! (We are willing to take up your challenge),” he said.

Wong who had been the Second Finance Minister for the past 15 years recently tendered his resignation from all of his posts in the state Cabinet.