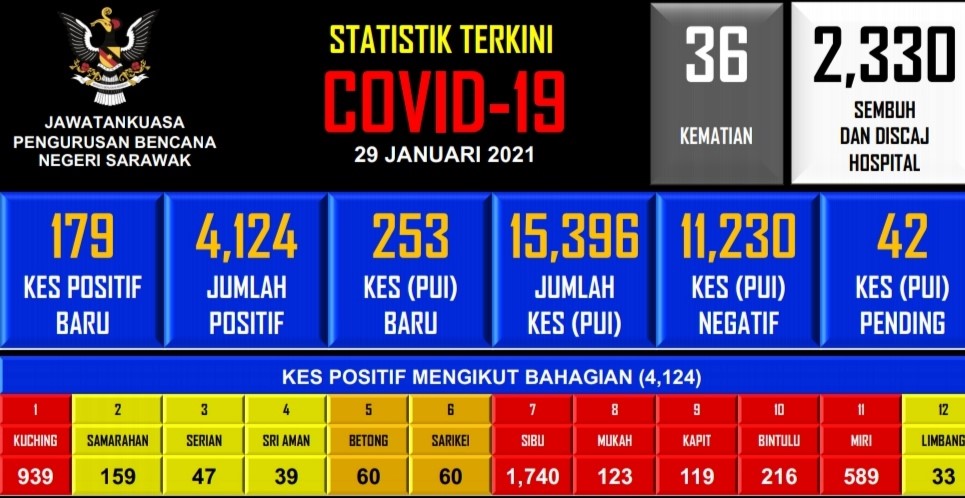 At the same time, there was one Covid-19 related death, bringing the total number of fatalities so far to 36.

“In Miri, four cases were from ACD, four from individual screenings, two involving medical workers and two individuals with symptoms,” he said in a daily Covid-19 update press conference today.

In Kapit, six cases involved the Pasai Cluster, four from ACD and one involving a medical worker.

All seven cases in both Lundu and Selangau districts involved the Pasai Cluster, while six cases in Bau involved a new cluster called Tabong Cluster.

In Bintulu, two cases were from ACD, two involved individuals with symptoms and one case involving a medical worker.

All cases in Sebauh, Meradong, Pakan and Samarahan were from ACD, while Kanowit recorded one case involving Pasai Cluster and one case of individual screening.

Kuching and Sarikei however, recorded one case of individual with symptoms each, while one case in Serian involved the Bedayan Cluster.

Uggah also said 134 cases had recovered and been discharged from hospitals on Friday – 76 from Sibu Hospital, 36 from Miri Hospital, 16 from Sarawak General Hospital (SGH) and six from Bintulu Hospital.

“This brings the total number of recovered and discharged cases to 2,330 or 56.50 percent of total Covid-19 cases in Sarawak,” he pointed out.