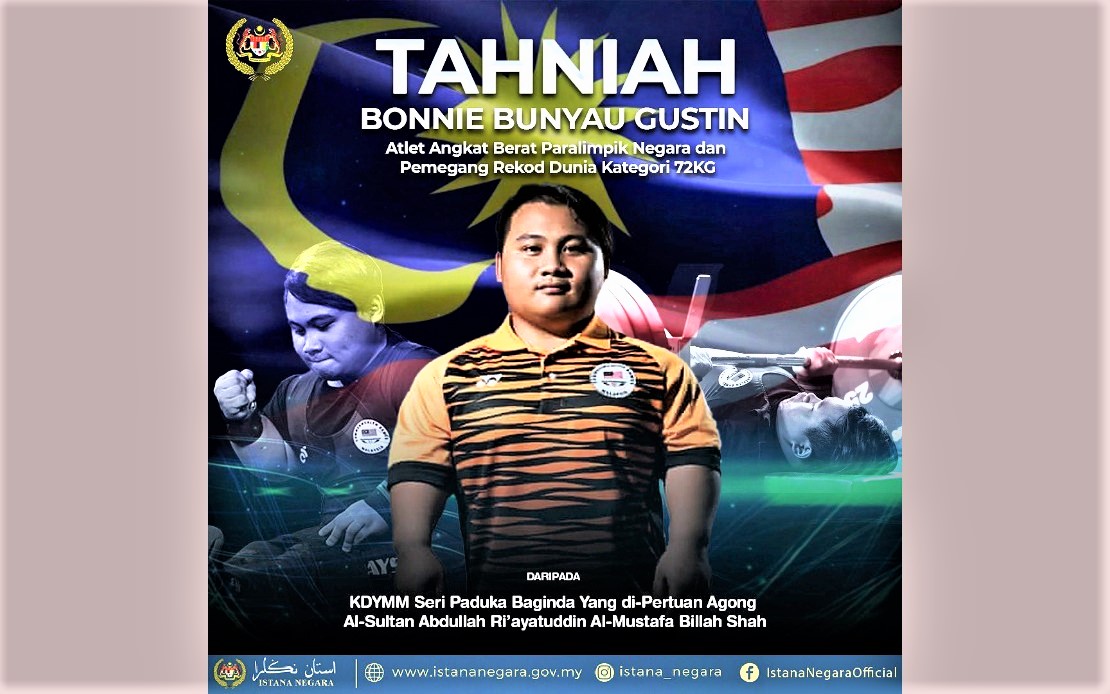 In a statement uploaded on Istana Negara’s Facebook page, His Majesty also expressed his happiness and pride over the success, which was also described as not only a historical feat for Malaysian powerlifting but one which garnered accolades for the country on the international stage.

In the men’s over-72kg category at the 11th Fazza Dubai 2021 Para Powerlifting World Cup in the United Arab Emirates (UAE) yesterday, Bonnie blew his rivals away by lifting 230 kg. Silver medallist Peng Hu of China could only lift 214 kg while bronze medallist Nnamdi Innocent of Nigeria could only manage 213 kg.

The 22-year-old’s feat erased the previous mark of 229 kg set by Iran’s Roohallah Rostami at the 2018 Jakarta Asian Para Games in Indonesia.

“Bonnie’s outstanding achievement once again proves that Malaysia is capable of producing athletes and individuals of quality, calibre and of international standards.

“It also proves that with commitment, fighting spirit and hard work, Malaysians are able to compete and succeed at the international level,” the statement read.

Al-Sultan Abdullah hoped Bonnie’s success and fighting spirit will be a source of inspiration to fellow Malaysians, in particular athletes, to work hard and strive for success in their respective fields domestically or on the international stage.

“The Yang di-Pertuan Agong wished Bonnie all the best and prayed that he would be blessed with continued success and to keep on putting the country on the world stage with more victories,” the statement said. – Bernama

In Cheng Hoe we trust