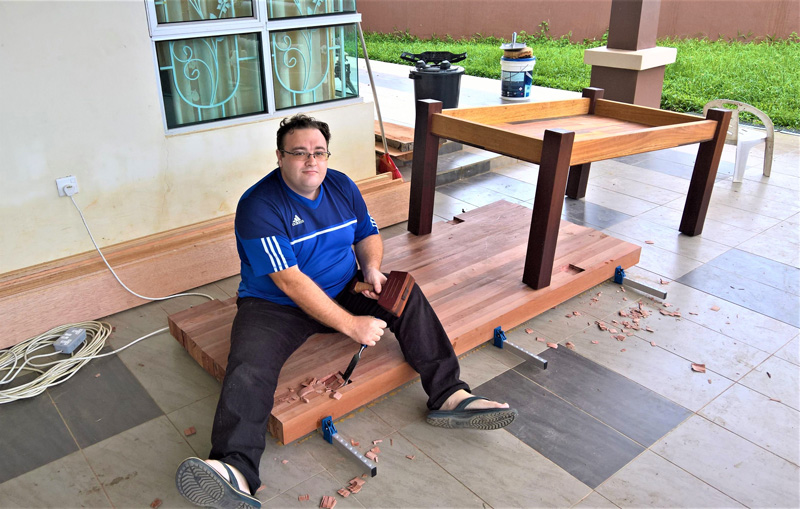 Learning to build and fix things since he was young, do-it-yourself (DIY) enthusiast Andrew Lawrence recalled growing up with the concept. According

Learning to build and fix things since he was young, do-it-yourself (DIY) enthusiast Andrew Lawrence recalled growing up with the concept. According to him, it is an incredibly rewarding hobby that can last a lifetime, and be passed down through generations of sons and daughters.

Something to be proud of

Do-It-Yourself (DIY) building projects can provide an individual a sense of accomplishment. As it can be considered important to learn how to repair household items, DIY enthusiast Andrew Lawrence said that DIY projects can boost the essence of life.

“Building is a life skill we can live without nowadays where we can get almost everything ready-made, but the biggest reason why you should learn it is the sense of accomplishment it gives. The ability to create something from scratch can really give you something to be proud of,” the 38-year-old shared.

Andrew opined that DIY projects can offer an individual the human need of ‘self-realisation’, according to Maslow’s Hierarchy of Needs.

“If you are not getting enough appreciation in other parts of life, building a table from scratch — something that you do with your own hands — and feeling proud about it can compensate,” noted Andrew.

Hailing from Adelaide, Australia, Andrew has been staying in Samarahan since a decade ago after marrying his Bidayuh wife.

As a DIY enthusiast, Andrew recalled growing up with the concept of building and fixing. “When I was around six to eight years old, I would dismantle my toys and eventually got good enough to put them back together. It was then I that I learned the mechanism of an object and how each of them works.”

From the skills he acquired, Andrew then learn to make new things. Andrew revealed that his father also has a knack to build things.

“Growing up, he was always good at making things. He made a pushcart for me when I was little. At one point, my father and my grandfather even built a small house with a tiled roof for us to play in,” Andrew recalled.

Observing them both while growing up, Andrew eventually picked up the interest. Apart from that, he was also exposed to skills training during school days.

“Schools in Australia train students with numerous skills. We were taught woodworking, crafting and carpentry. One time, I even learned how to make printed circuit boards,” he said.

As a father of two boys, he did not miss out on the opportunity to teach his sons the art of building and repairing. During his time working on a project, Andrew would often show the boys a thing or two.

“My six-year-old now knows how to drill a hole in the wood and hit nails with a hammer.

Meanwhile, I let my four-year-old play around while I go about my projects,” the loving father said.

During Christmas, Andrew together with his boys will be busy decorating the Christmas tree with DIY decorative ornaments cut out of felt.

Among the many projects he has done were crafting three mallets from Belian and Merbau wood scraps.

“The mallets are made out of revered local wood Belian,while the handles were Merbau. I got the Merbau wood scraps from an unused door frame given by a local carpenter.” In return for the carpenter’s generosity, Andrew gave him one of the mallets.

Another mallet was given to a community workshop in Adelaide. “The one I made for them is now being used to make numerous projects.”

When asked about his inspirations to build, Andrew said that they usually come from different reasons. “For some projects, the inspiration is based on needs. I often build something that I need. But sometimes, it can also come from just wanting to make things for yourself.”

Giving an example, Andrew said that one could personalise an object to fit them. “A chair can be tailor-made to your height, a perfect one for you and is not like any other generic chair.”

As with a lot of enthusiasts, Andrew has a high appreciation for wood. After much time spent with it, he learned to treasure the beauty of timber.

“Malaysia and Sarawak, in general, have some of the most beautiful hardwood in the world. Apart from Belian, Mahogany, the underappreciated hardwood is one of the timber that I like.”

However, his favourite wood is the Selonsor. “It is a beautiful, light to dark brown timber. Also, a nice material to work with. It cuts well, and drills in easily.” He shared that at writing time, he is working to make a workbench tabletop using the Selonsor.

Aside from that, he also has an appreciation for Rengas. According to him, due to the poisonous nature of the sap, the timber is not very often exploited. “The seasoned timber, however, is quite safe to handle once the sap is dry. While many don’t like working with it as the sap can cause itchiness, as a finished product, the black and deep red Rengas looks spectacular,” Andrew said.

2.         Power tools just make work faster and easier There is very little you can do with a power tool that you can’t do by hand if you are willing to put in the effort. Don’t be discouraged from taking on a project just because the guy on YouTube has a RM5,000 mitre saw, you can cut the same wood with a RM50 hand saw just as

Basic wood working tools are a hand saw, drill, mallet and chisel. A lot of simple projects can be completed with just these tools, and they are all cheap.

They just know how to hide them better than you. Learning how to hide or fix a mistake not only saves a project but keeps it looking like it was made by a professional.

If you have someone in your life who does woodwork, buy them a clamp for their birthday, big or small it doesn’t matter, they can always use another good clamp.

Sarawak gearing to be a force in shooting