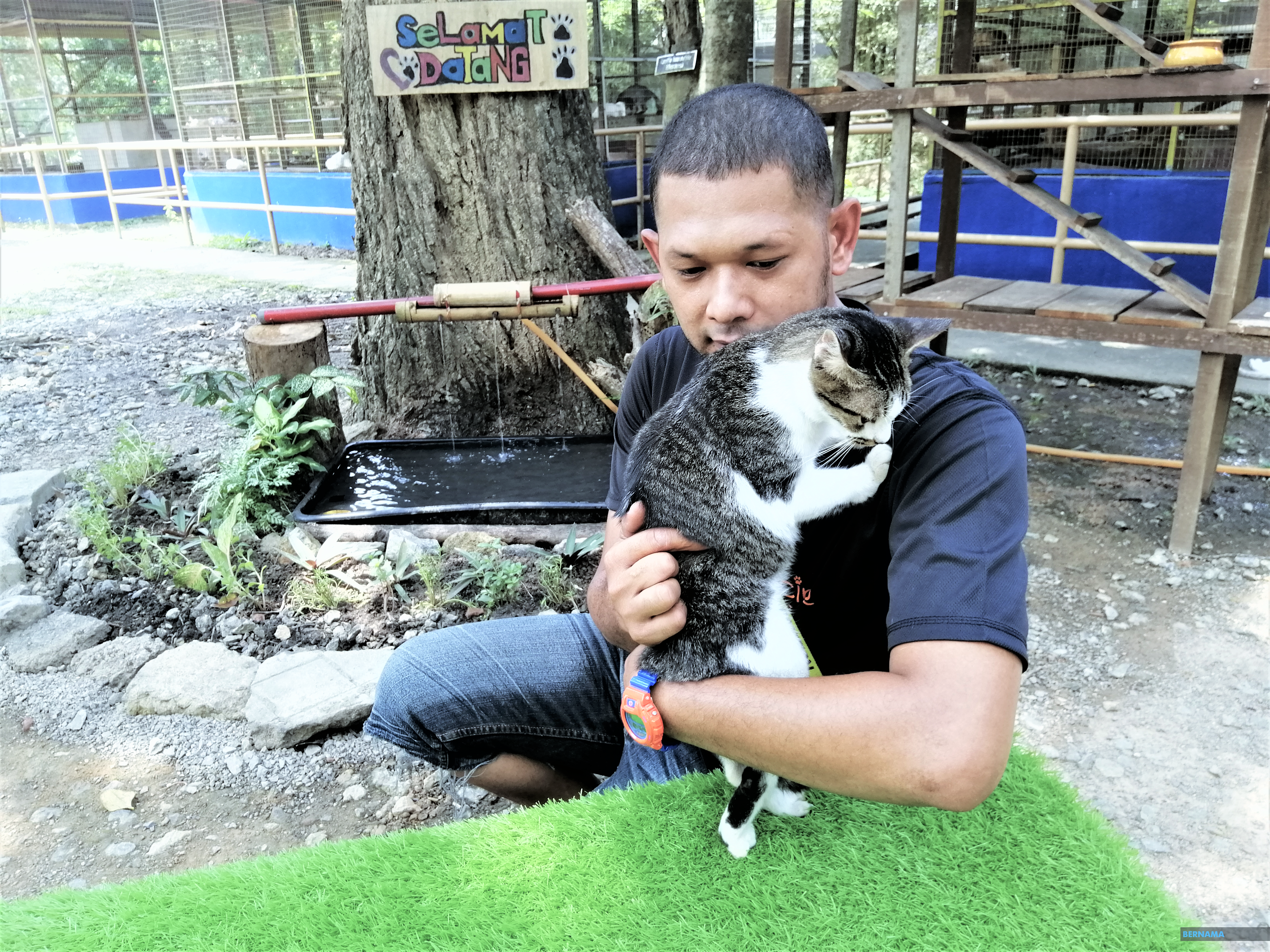 By Nur Syuhadah Yusof
KANGAR: Some people who call themselves cat lovers are only willing to adopt cats that they find beautiful or adorable.

They would not mind spending a small fortune to ensure their pet felines receive the best treatment and remain beautiful.

It is a different story with Mohd Taufiq Md Zain, 53, and Khairunizam Nayan, 32. These true cat lovers care for cats so much that they would adopt and invest in strays that have been neglected, diseased, maimed and those many would no longer find cute.

They started taking in stray cats into their home in 2015. In just that year alone, they housed 100 cats in a large cage in Mohd Taufik’s home in Taman Harmoni, here.

Eventually the number of strays they adopted increased, creating a pressing need for a bigger and more suitable location for the cats to stay in. The concentrated number of felines in the house also created an offensive odour that caused unease among the neighbours.

Their plight and selfless effort caught the attention of the general manager of the Perlis State Economic Development Corporation Norsiake Kassim who decided to provide a bigger home for the cats at the Perlis Snake and Reptile Farm in Sungai Batu Pahat, near Kangar.

Eight cages measuring 5m x 5m were initially allocated for the purpose. However, after recently receiving an allocation of RM50,000 from the Kangar MP Noor Amin Ahmad, a much larger cage of 50m x 15m was built to house the cats in so that they would have a bigger and more comfortable space to roam in.

“The cats receive much better care and attention here that they have become beautiful and adorable once more. They have even become a major attraction here,” he told Bernama.

Today, Bustana Kuching is home to around 500 cats. Some visitors have even posted about the feline sanctuary on social media, likening it to Aoshima, the “cat island” in Japan.

Aside from the aid received by PKENPs, Bustana Kucing also receives help from an animal activist from Kuala Lumpur Thomas Jong @ Hazrieq Haikil.

With their beloved cats now in a much better home, Mohd Taufiq as managing director of Bustana Kucing and Khairunizam are more committed in providing the best care for the neglected cats.

Recounting their experience saving strays, they said that most of the cats adopted were those found in heart-rending condition.

Some were ill while others were found emaciated, crippled or blind. The worst were riddled with diseases like sporotrichosis, Feline Infectious Peritonitis (FIP) and feline parvovirus.

“Although their condition makes them look dirty and repulsive to some, they are still alive and can be treated. All they need is some love and compassion from a soul willing to take care of them and help them get treated,” said Khairunizam.

As the main caregiver of the cats at Bustana Kucing, his job was to provide them with nutritious food to aid in their healing.

“I’ve also trained them to eat and sleep at certain times,” said Khairunizam, who described taking care of the cats like taking care of his own children.

Bernama visited the cat sanctuary at noon and found the kittens to be asleep, as they had just been given their meal.

Mohd Taufiq said that over 40kg of nutritious food was needed daily to nourish the cats in their care, costing around RM300.

Medication and treatment costs, meanwhile, take up around RM70-RM80 a day.

“Severe fungal diseases like sporotrichosis can be passed on to humans, so some may find infected cats disgusting but we because I love cats so much, I treat them myself,” he said.

Because the sanctuary was operating on a limited budget, Mohd Taufiq would seek medical advice from his veterinarian friends before treating minor cases.

For the more serious ones, the cats would be brought in to an animal clinic for treatment.

Mohd Taufiq said cat lovers who would like to help can do so by sponsoring a cat for RM30. To date, 40 cats have been adopted.

“We do not have a specific fund for the cats. What we have is an account under the name “Kelab Bustana Kucing”.

“There would be some money there, but not that much — maybe around RM200-RM300 which we would immediately use to pay workers who clean the cages or to buy medication and equipment.

“We are planning to build the biggest cat theme park and shelter here, so it would help us very much if the public could support our effort in sheltering these stray cats,” he said. – Bernama