by S Sivanesan
German students to do apprenticeship in S’wak 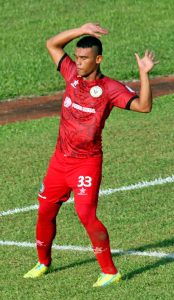 Gibson Billy a centre back from Bintulu

KUCHING: Premier League side Sarawak have received a shot in the arm after prolific forward Bobby Gonzales was passed fit to face Selangor United FC.

Coach Farhan Abdullah could also turn to new signing Hudson Dias de Jesus in the away game at Selayang Stadium this Saturday.

The Brazilian striker is likely to come on in the second half as he gets used to the team tactics and his new teammates.

Farhan revealed that his players were all fit and he would have a tough time picking his top eleven.

“Spirits are high and everyone wants to start.”

“I can’t stress enough how young this squad are and their maturity thus far is encouraging and we are doing our best as coaches to steer them in the right direction. 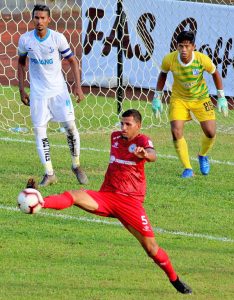 Sarawak’s Brazilian import Pedro (No 5) vies for the ball during the Premier League match against Penang at the State Stadium last Saturday. Photos: Ghazali Bujang

“So far I have no complaints as the boys are playing with their hearts on their sleeves, keeping close to the game plan as possible and that’s all I can ask for,” he said.

Some players who have caught the eye of fans are Brazilian defender Pedro Dias and local boy Gibson Billy from Bintulu in the centre of defence.

Pedro has been effective in a sweeper role while Gibson is a centreback with a penchant for making dangerous long throws.

Gibson, 19, has two assists to his name – Pedro’s goal in the season opener 2-1 loss to Negeri Sembilan away, and Bobby’s header in the 2-0 win over Penang at home.

Two other players have played well are midfielders Rian Firmansyah and Asrin Kalam, who make up for their slender frames with sheer tenacity and clever possession football.

Seventh place Selangor United FC are a side based in Hulu Langat, Selangor under the auspices of Selangor Malay Football Association, which started in 2016 and gained promotion to the Premier League last year after undergoing a rebranding exercise.

They gained the promotion spot through qualifying for the semi-finals of the 2018 Malaysia FAM Cup even though they lost the tie to Terengganu City FC.

The club have gathered their own following and Selayang Stadium is expected to be at full capacity and really noisy this Saturday when Sarawak meet them for the very first time in league football.

Sarawak, currently in fifth spot, have played Selangor United FC before but this was a friendly in pre-season and they are relatively still an unknown force.

After Saturday’s game, Sarawak will play hosts to neighbours Sabah, who are currently in ninth position in the 12-team league, on Feb 23.

S Sivanesan
View All Posts by Author
Man United can still progress despite PSG defeat: Herrera
Previous Post
RON95 and RON97 up by 1 sen per liter