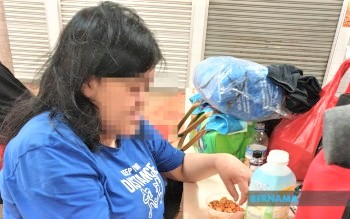 SINGAPORE: “I have a home, but I like it this way. It is my own choice.”

This was the reply of a Malaysian met by Bernama last night while checking on claims of Malaysian workers being among groups of homeless people in Singapore.

The three-hour observation that started at 10 pm was conducted in several parts of Kallang, which is located in the central region of island.

Kallang was picked based on Singapore’s first nationwide study released in November last year that found it was one of the five areas on the island with the largest number of homeless people.

Only wanted to be known as Chris, the 48-year-old was a cleaner at Changi International Airport who hails from Miri, Sarawak.

When Bernama came across Chris, she was sitting alone at a hawker centre while watching her favourite show on her mobile phone.

Asked why she chose to sleep on the streets, the 48-year-old said: “I like being alone.”

Chris, however, indicated that she would have been willing to remain indoors if she had been given the choice of having the whole room to herself.

When prompted, Chris, who came to Singapore a year ago, accepted a blanket offered and was also seen fiddling with a can of cat food, later admitting that she adored cats and often feeds the strays that roam the hawker centre.

Chris, the only Malaysian from about 30 homeless people the writer met last night, has been on the streets for the past two months.

Besides the hawker centre, some were found at the corners around the playground, the stairs of the Housing Development Board (HDB) and the commercial building.

These places fell within the findings of the study released by the Lee Kuan Yew School of Public Policy (LKYSPP) at the National University of Singapore, a year ago.

The first nationwide study of homelessness in Singapore, supported by the republic’s Ministry of Social and Family Development, found that about 1,000 people were sleeping on the streets with those places being favourite spots.

The ministry has defined a homeless person as someone “who feels he has no home to go back to, whether he owns a house or is renting a place.”

Apart from Kallang, the study also found Bukit Merah, Rochor, and Geylang as the areas with the largest numbers of homeless people ranging between 51-100 while Downtown had more than 100 people.

Meanwhile, when contacted, Gilbert Goh, the founder and the president of Transitioning.org said: “I think most (Malaysians) have managed to get their own lodging.”

Goh has been actively sharing about his efforts to assist the homeless on social media and on a few occasions had mentioned that amongst who were sleeping rough were Malaysians.

Bernama was made to understand that based on passport renewals since June, an estimated 25,000 Malaysians live in the Republic. – Bernama