KUALA LUMPUR: Malaysia will again implement the movement control order (MCO) nationwide from Wednesday (April 12) to June 7 in an effort to curb the growing spread of Covid-19.

Prime Minister Tan Sri Muhyiddin Yassin announced the enforcement of the MCO after a Special National Security Council (MKN) Meeting on Management of Covid-19, which he chaired in Putrajaya today.

“With daily cases exceeding 4,000 cases, 37,396 active cases and 1,700 fatalities reported as of May 10, Malaysia is facing the third wave of the pandemic, which can trigger a national crisis.

“The emergence of new variants with higher infection rates, an alarming constraint to the capacity of the healthcare system and poor SOP compliance among the people demand that the government take a more drastic action to prevent the country from falling into a more severe health catastrophe,” he said in a statement.

Following the implementation of the MCO, Muhyiddin said house-to-house visits as well as visits to cemeteries during the Hari Raya Aidilfitri celebrations are banned.

“This limit will also be used for regular prayers and Friday prayers,” he said.

The Prime Minister said the operations of non-Islamic houses of worship would also be tightened and the standard operating procedure (SOP) regarding this would be set by the National Unity Ministry.

Apart from that, Muhyiddin said employers were required to implement the work from home policy, with no more than 30 per cent of their management staff present in office at any one time.

For the public sector, the work from home policy will be determined based on the guidelines issued by the Chief Secretary from time to time.

On the number of people allowed in private vehicles, taxis and e-hailing rides, Muhyiddin said it would be limited to three persons, including the driver, while the number of people in vehicles that are part of the industrial and economic sectors would be based on the vehicles’ commercial registration licences.

“The number of people allowed in public transportation must be in accordance with physical distancing and comply with the stipulated SOP,” he said.

For the duration of this MCO, the Prime Minister said no dine-in at food premises will be allowed, except for drive-through and takeaway.

In announcing the closure of all educational institutions, Muhyiddin said exception would be made for students sitting for international examinations while child care centres, nurseries and kindergartens are allowed to operate according to stipulated SOP so as to assist working parents or guardians.

He said that inter-district and interstate travels are prohibited, except for emergencies, health matters, work and economic purposes, vaccination appointments and long-distance couples.

Muhyiddin said all forms of social gatherings, including wedding and engagement receptions, prayer ceremonies and tahlil, dinners, birthdays, as well as official government and private functions are not allowed.

Any form of face-to-face seminars, conferences and meetings are also prohibited, he said.

The Prime Minister said, however, akad nikah ceremonies are allowed, with the number of attendees and SOP to be set by the state Islamic agencies for Muslims and by the National Registration Department for non-Muslims.

Muhyiddin said that throughout the duration of the MCO, the specific measures being implemented in Sabah, Sarawak and the Federal Territory of Labuan will be continued.

He said that during the MCO, all economic sectors will be allowed to operate and a detailed SOP on all the prohibitions and directives for the MCO this time would be announced by the MKN. – Bernama 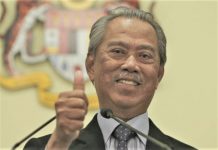