By Kenny Teng Khoon Hock
BUTTERWORTH: A non-governmental organisation here has launched a toll-free helpline (1800 22 5757) to provide counselling and emotional support to those who are depressed or are having suicidal thoughts.

Offered by Sneham Malaysia Welfare Association, the helpline has been functioning since Jan 14 this year and its services are targeted at those who wish to communicate primarily in Tamil and also in Bahasa Malaysia and English.

According to Sneham Malaysia, it is the first NGO in Malaysia to offer counselling services in Tamil.

Its founder and president Dr Florance Sinniah said she first came up with the idea of setting up an NGO to reach out to those suffering from mental health issues in 2017.

“Our objective is to create public awareness on suicide prevention and to provide counselling and emotional support to those who are depressed or are having suicidal thoughts, with Tamil as one of the languages to communicate with them in addition to English and Bahasa Malaysia,” she told Bernama.

According to the World Health Organisation, one person dies due to suicide every 40 seconds globally.

In Malaysia, media reports have quoted the police as saying that 1,696 people committed suicide while 625 attempted suicide between 2014 and February 2018.

However, Florance said most of the figures reported were underrepresented and she reckoned that mental illness may eventually be the second leading cause of death among Malaysians after heart disease.

“It is time for the government, private institutions and other relevant agencies to take mental illness and depression problems seriously and to come out with a national strategy to address the matter,” she said.

She said Sneham Malaysia, which is funded by community donations, has about 30 volunteers and on a daily basis, 12 volunteers would be at hand to man the helpline.

“Since we started the helpline, we have received more than 45 calls. About 20 per cent of the callers revealed suicidal tendencies caused by low self-esteem, relationship problems and family issues,” she said, adding that during every phone conversation, the identity of the volunteer would remain anonymous. 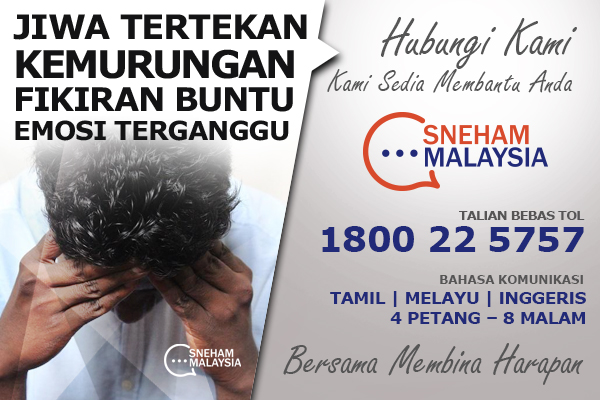 Meanwhile, one of the volunteers of Sneham Malaysia A. Suryakumar, 44, said he joined the organisation six months ago to reach out to those who have emotional issues but are reluctant to share it with others.

He said he had been troubled by the death of his 18-year-old nephew T. Nhaveen, who was beaten by a group of teenagers who used to bully him at school. Nhaveen, whose case was widely reported by the media, succumbed to his injuries on June 15, 2017.

“There is a need to go to schoolchildren and educate them on emotional well-being, appropriate behaviour and the dangers of bullying. It is hard for a person to have emotional problems and not be able to share it,” said Suryakumar.

His conversations with the people calling the helpline would usually go on for two to three hours as it takes a lot of time to build up their trust and confidence, he added. – Bernama

If you are in Sarawak, you can also reach out to the BeFrienders. 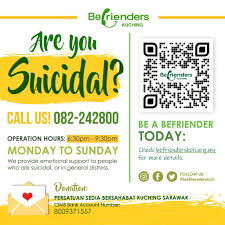 Could be voters yet to embrace PH: Dr Mahathir

5G is not hazardous to health: Experts

All safeguards in place, public assured

Drivers, JPJ is monitoring you!

Get vaccinated before travelling overseas

Could be voters yet to embrace PH: Dr Mahathir