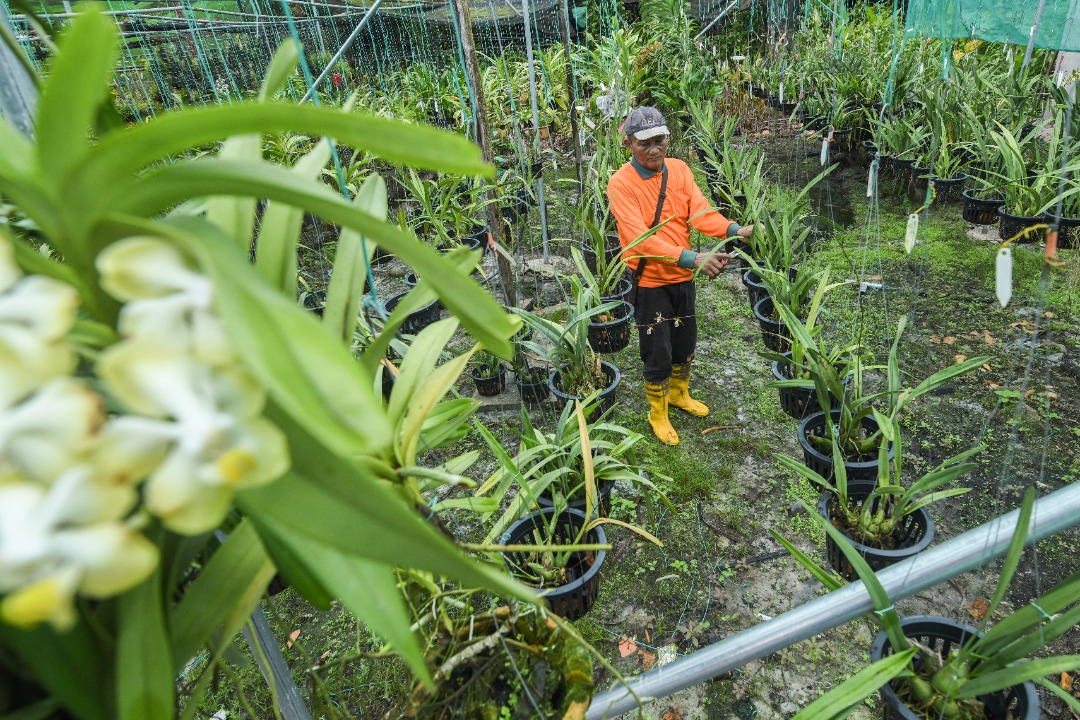 ORCHIDS are exalted for their striking beauty and elegance to plant lovers – enough to attract plenty of admiration and attention, with many cultures celebrating it for its appearance.

However for the layperson, orchids are simply just another flowering plant, basically always an expensive item to purchase and notorious for being difficult to take care of.

Aside from its floral beauty and rarity, this distinctive flower is recognised for its economic value in terms of generating income especially for orchid farmers in Sarawak.

Orchidwoods Company proprietor, Au Yong Kien Chung, who is a second generation orchid farmer, said there is more to nurturing orchids than just a hobby as it can generate vast business opportunities.

He said the people must be aware of the economic value of orchids and inculcate a love for gardening, especially in the orchid industry, while urging them to tap into its market through participation in commercialisation efforts.

“The most important thing now is to educate the people on the significance of orchids and how to monetise the growing business and make a living out of this,” he said, in stressing on the importance of having a grasp on the know-hows of cultivating and selling orchids.

“They must know which orchids are marketable based on specific localities and not simply produce, thinking that we can sell everything,” he told the New Sarawak Tribune.

Kien Chung attributed his company’s success to the many years of experience of cross-breeding various types of orchids to develop new hybrid variations that appeal to the masses – growing and wholesaling them in his numerous nurseries both locally and internationally.

“Commercialisation is the way forward to generate an economy for the state on condition we can mitigate the transportation cost for exporting. Compared to those in the peninsula, we are at a disadvantage.

“To counter this, we can also produce orchids at a lower cost and at a better quality, besides having unique offerings,” he said.

According to Kien Chung, the value of commercialisation, once known and well received, would be a boon to the livelihoods of the people besides serving as an attraction to visitors from the different states and other countries.

“Imagine this, villagers are into mass-breeding orchids at their homes. When the flowers bloom, their village is beautified and tourists are sure to throng their villages to admire the beauty of orchids themselves.

“Who knows, maybe they will even buy a plant or two. And with tourism, the villagers can also improve their livelihoods through promoting local specialties in the food and beverage industry as well as the arts and crafts industry, besides selling their orchids,” he suggested.

The leading orchid farmer of Sarawak asserted that there is no expertise needed in breeding orchids through the run-on-the-mill methods and the skill can be picked up in a matter of days and weeks.

“In our company, we typically only do sibling crossing, it’s faster. We typically don’t do tissue culture breeding unless we are mass producing a certain orchid to the tens of thousands.

“From one seed pod, we can cultivate a few thousand plants. We just sow the seeds and it is much easier, while the tissue culture technique is suitable for commercialisation,” he said.

Despite what seems to be a ‘‘low hanging fruit” literally, he said the industry is currently at a stagnant trend due to the recent COVID-19 pandemic.

“Many shops have closed. Those who can sustain will have the future market and I think there are still big opportunities in this and things will pick up again in a year or two,” he enthused.

He added that the trends for orchid gardens nowadays are also leaning towards replacing decorative orchid plants, instead of the conventional “taking care and let it grow for years” method.

Citing the orchid display at Gardens by the Bay’s Cloud Forest in Singapore as precedence, he said: “They are known to replace their orchids displayed at the facility every few months due to the low replacement cost as opposed to high cost of maintaining the orchids. This is also an opportunity.”

Kien Chung, who is now in his 50s, revealed that his life with orchids started since he was born as his days were filled with the nature of orchid wonders outside his doorstep created by his father, the famous Orchid King, the late Datuk Au Yong Nang Yip.

He said the orchid foray started when his father was tending his grandfather’s orchid as part of his hobby.

“Eventually people started asking whether he is selling his orchids, from there, my father started cultivating orchids which in turn cultivated his own interest,” he recalled.

His love for orchids grew as he shared that orchids are full of surprises, saying: “When you grow an orchid, after having to take care of it for months, when it blooms – it is like the fruits of your labour.”

“Different kinds of orchids provide different surprises, sometimes you do not expect the flower to be of a certain colour especially if it is a hybrid, hence that is what makes orchids amazing.”

From his years of experience since young, Kien Chung has met a myriad of species of orchids, and through his experiences, he shared that each orchid has different ways of maintaining it. “There is no exact way!”

However his advice to those wanting to walk the orchid way, “Buy a few first, learn to grow them, then when you feel happy, only then you start heading on. Along the way, you will also learn how to care for it.”

As most orchid nurseries owners would typically join orchid exhibitions, he emphasised that such an event could also contribute to the sweet smell of success for orchid commercialisation.

“I really hope that more orchid shows can be hosted (in Sarawak) in the near future. Apart from promoting our local orchid species, the people can also learn about species native in Malaysia, especially in the state,” he said.

The two-year hiatus due to the pandemic has hit not only foreign but also domestic sales, and despite the reopening of the international border, local demand remains lukewarm, he pointed out.

He dwells on the fact that locals have little knowledge of orchids while the government also needs to do something in spreading awareness to the people about the plant.

“Orchids are often believed to be overly expensive and difficult plants to grow. While certain species require more expertise, most of the local orchids are easier to grow.

“Some even thought that orchids only have a single type of flower and variety,” said the forty six-year-old orchid farmer.

He added that during the Movement Control Order (MCO), lockdowns have led many to discover new passions including growing orchids.

But as the country has resumed its normal routine, people are also returning to work and caring less about their plants which resulted in less trading, according to Wong.

Now, the family business is bracing for a fresh blow after being battered by the pandemic and Wong asserted that they are still observing if the business is doing well after the outbreak.

Growing up with an orchid-lover dad, Wong said the fascination grew on him since he graduated from high school.

“Back then, I helped my dad tending his orchids in our backyard in the Green Road area, where we run a small grocery store during that time,” he said.

He remarked how his dad has been growing orchids as a hobby since he was a child in the 80’s before turning the interest into a family business.

“I used to believe that orchids only came in one variety. Then I was hooked by my father’s hobby, and it became my interest as well. Eventually it became our bread and butter.

“I recalled how Kuching people were less aware of orchids and not many can be seen growing in one’s house. Now it has been forty years since my dad, Charlie Wong established the business and we have sold countless species.”

Often his customers complained that the orchids they had bought from the garden died after a few weeks, Wong noted that they just have to keep the orchid’s roots moist enough but not too dry at the same time.

The best trick for beginners, Wong said, is to grow a hybrid species, which are the results of the breeding of two orchids with traits from both parent orchids.

“Hybrid orchids are easy to grow. From the moment you bring them home, replace them with a bigger pot and it will take six to eight months to bloom. Don’t just give up on your first trial but understanding how they grow naturally and learning the best environment the plant could blend in is the best trick,” Wong added.