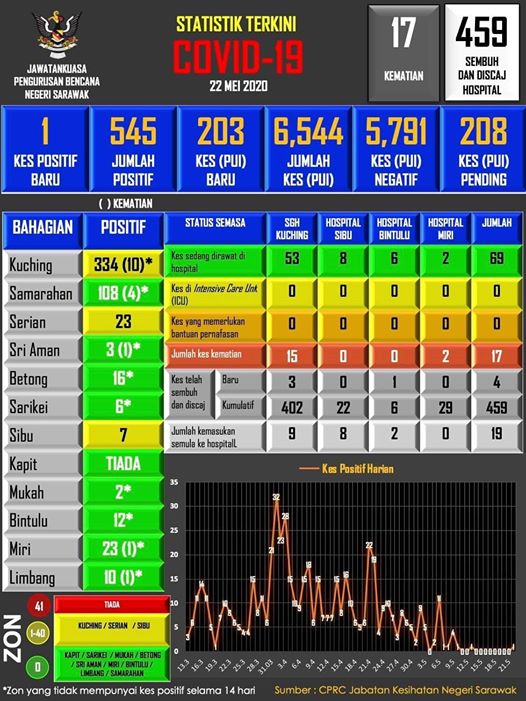 KUCHING: Sarawak recorded one new positive Covid-19 case yesterday, ending its eight-day streak of zero new cases and bringing the total number of cases to 545 since the first positive case was reported on March 13.

A statement by the Sarawak Disaster Management Committee (SDMC) said the new case was reported in Kuching involving a 29-year-old female patient whose source of infection was still under investigation.

The statement added that as of yesterday, there were 69 Covid-19 cases undergoing treatment in hospitals in the state, out of which 31 cases are located in Kuching, Samarahan (15), two each in Sibu and Miri, Serian (four), Bintulu (six), Betong (five) and one each in Bau, Lundu, Mukah and Sarikei.

Meanwhile, four cases have recovered and been discharged from hospitals. Of the four, three are from the Sarawak General Hospital (SGH) and one from Bintulu Hospital.

“The total number of positive Covid-19 cases which have recovered and been discharged is 459, or 84.22 percent,” read the statement.

There were 19 cases that were re-tested positive for Covid-19 and been readmitted into hospitals. Thus far, the virus has resulted in 17 deaths in the state.

Meanwhile, the committee said that 5,871 applications for inter-district movement were received at 28 district police headquarters throughout Sarawak yesterday, bringing the cumulative total to 55,494 applications.

SDMC has coordinated the return of 8,500 students from Malaya, Sabah, and Labuan as of yesterday.

There are presently 3,735 individuals undergoing quarantine at 53 centres throughout the state.

No soldier along border affected by Covid-19

Better footwear for frontliners from Pansar