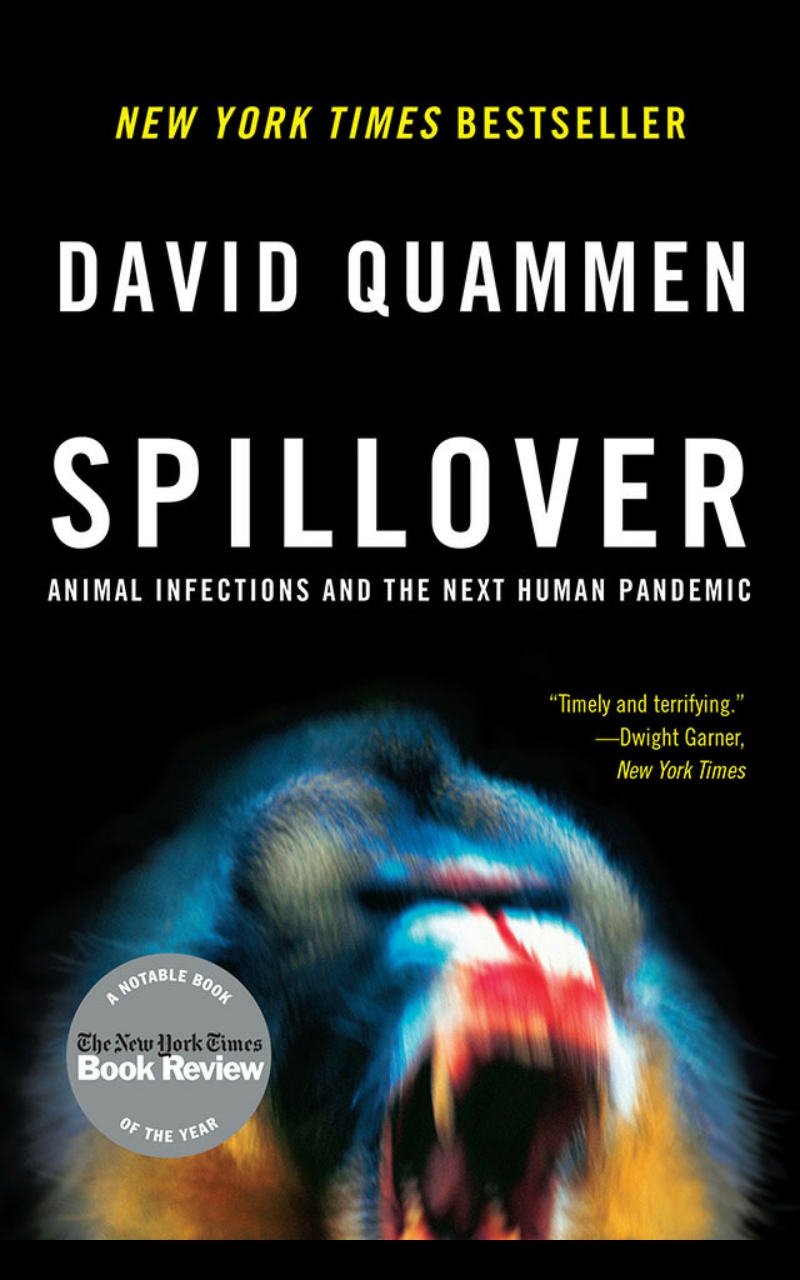 A relevant read in times of the pandemic

Covid-19 made me pick this book to read. Seriously. It seemed so relevant with the coronavirus pandemic now wreaking havoc around the world, despite the book being written in 2012. This is a massive book, clocking in at a hefty 500-plus pages.

“‘Spillover’ is the term used by disease ecologists to denote the moment when a pathogen passes from members of one species, as host, into members of another,” to quote David Quammen, while “a zoonosis is an animal infection transmissible to humans.”

This book gives an extraordinarily detailed look into zoonotic diseases (diseases that spill over from animals to humans), about the people who investigate these diseases, and everything else in between.

A study by two scientists at the University of Edinburgh in 2005, who looked at 1,407 recognised species of human pathogen found that zoonotic bugs account for 58 percent of them.

Ebola, bubonic plague and the Spanish flu of 1918-1919 are all zoonoses. So are all the human influenzas, SARS, AIDS and some forms of malaria. Closer to home, there is the Nipah encephalitis which was first discovered in Malaysia in 1998.

Zoonotic pathogens ‘hide’ within a reservoir host (sometimes also known as a ‘natural host’), “a living organism that carries the pathogen, harbours it chronically, while suffering little or no illness”.

From the reservoir, the pathogen might jump directly over to infect a victim, or it might jump to an intermediate animal called an amplifier host, a creature in which it replicates plentifully and from which it spews. Nearly all zoonotic diseases result from infection by one of six kinds of pathogen: viruses, bacteria, fungi, protists (a group of small complex creatures such as amoebae, formerly by misleadingly known as protozoans), prions and worms.

Quammen is no armchair researcher. He goes to where the science happens. He personally interviews scientists all over the world, from Africa, Australia to Southeast Asia, and takes part in the actual field work to learn how, where from, and why zoonotic diseases emerge.

The scientists’ anecdotes give the research the human touch and are both instructive and amazing. Phenomenally informative, fascinating and entertaining. So much information, you really have to pay 100 percent attention and then some.

Quammen is the author of 15 fiction and non-fiction books to date. He has been honoured with the John Burroughs Medal for nature writing, an Academy Award in Literature from the American Academy of Arts and Letters, an award in the art of the essay from PEN, and (three times) the National Magazine Award. Quammen is also a contributing writer for National Geographic. He is a former Rhodes Scholar and was educated at Yale and Oxford.

The book kicks off in Australia, where we discover how a new virus which would eventually be called Hendra spilled over from bats into horses and from there into people.

Moving on to central Africa, a grisly tale of dead gorillas in the forest, consumption of rotting bushmeat, sorcery and Rosicrucianism that announces the re-emergence of Ebola; a highly lethal disease that causes intense fever and massive haemorrhaging, in six different central African countries.

In the state of Sarawak in Malaysia, he meets up with Balbir Singh, a microbiologist looking into the spread of monkey malaria into people. Along the way we take a little detour to learn how mathematics is related to understanding the spread of infectious diseases. And learn that one type of malaria can be used to treat syphilis (a treatment called pyrotherapy). Wow.

In China, he feasts on durian (“tastes like vanilla custard and smells like the underwear of someone you don’t want to know”) and helps trap local bats, which in 2003 infected civet cats and then people with virus that causes SARS. This is probably the most relevant part of the book because SARS — like Covid-19 — is a coronavirus.

To further elaborate, the book details the virus’ migration from harmless little horseshoe bats, which lives in caves in southern China. Somehow, it jumped from them into civet cats (which are not really cats, by the way) in Guangdong’s ‘wet markets’, where they sell wild animals for food.

The microbe then jumped into a few people around Guangdong who had been exposed to live civets in cages. In humans it became airborne, contagious and lethal. An infected 78-year-old woman inadvertently took a stealthily spreading endemic global when she flew from Hong Kong to Toronto. The rest, as they say, is history.

In New York, Quammen helps capture the white-footed mice that harbour the agent that causes Lyme disease. It is now the most common tick-borne disease in North America. Lyme, however, while being zoonotic, is not a viral but bacterial. It stands as a reminder that “not every bad, stubborn new bug is a virus”, according to Quammen.

In Cameroon, he traces the path of HIV-1, the principal form of the virus that causes AIDS and its first human victims. He ventures to the Congo-Cameroon border and in the local markets hunts for poached ape meat to find out how the virus could have crossed from chimp to human.

Quammen can explain complex subjects and complicated fundamental concepts in a way that captures the essence without dumbing down, leaving both the novice and the more knowledgeable reader satisfied.

Concepts like the basic reproduction rate, or ‘R0’ (R-naught, the number of new infections caused by an initial case), critical community size (the number of susceptible individuals required to sustain transmission of an infectious disease) and the high mutation rate of RNA viruses are all properly explained.

Quammen opines that human-caused ecological pressures and disruptions are bringing animal pathogens ever closer with human populations, while human technology and behaviour are spreading those pathogens ever more widely and quickly. He tells us that we are “tearing ecosystems apart” and animals and humans are encountering each other in novel, unexpected ways. “We shake the trees, figuratively and literally, and things fall out.” Which leads us to the ‘Next Big One’. It’s a subject that disease scientists around the world often have to deal with, according to Quammen, and the consensus among the ‘eminent disease scientists’ he talked to is that the Next Big One is inevitable and will be zoonotic.

The most recent big one was AIDS, the final toll of which cannot even be predicted —32.7 million deaths, 75.7 million living people now infected (according to latest Unaids data), with no end in sight.
In the last century, the biggest of the big ones was the 1918-1919 influenza, killing about 50 million people. And the virus that caused it wasn’t precisely identified until 2005. Influenza has also been mentioned as a candidate for the Next Big One. Hurray.

All things said, Quammen’s meaty, sprawling book hardly touches on such pandemic-worthy animal pathogens as avian flu or multi-drug-resistant bacteria. Instead, it informs in abundance, the unfolding convergence between veterinary science and human medicine, and how veterinary-minded medical experts discover and track diseases that spread across species.

‘Spillover’ is less a portent than a pronouncement: these crossovers force us to uphold “the old Darwinian truth (the darkest of his truths, well known and persistently forgotten) that humanity is a kind of animal” — with a shared fate on the planet. “People and gorillas, horses and duikers and pigs, monkeys and chimps and bats and viruses,” Quammen writes. “We’re all in this together.”

Elvis turns 86, forever the king
Previous Post
The bright star that burned out too soon