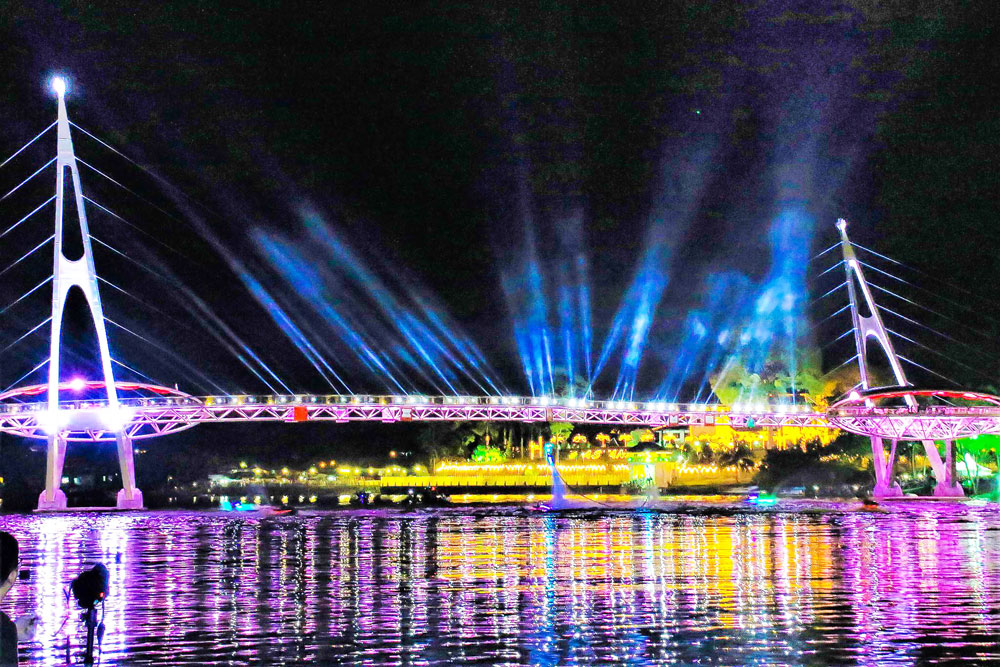 Sarawakians particularly those who were in Kuching recently united at the site of the launch of the newly built landmark located at Waterfront Kuching – the new bridge of Sarawak. Now known as the Darul Hana Bridge, as announced by Head of State Tun Pehin Sri Abdul Taib Mahmud during the launch, it became the reason that people from different walks of life whether from Sarawak, or Malaysia, or even tourists, to gather at the Waterfront on the night of November 11.

As early as 4pm, Waterfront can be seen flocking with people who wishes to watch the grand ceremony of the bridge. And by 7pm, those driving can hardly find any parking around the vicinity as it was not only filled with cars, but it is also easy to catch those who double parked. Waterfront was unimaginably crowded, which gave a feeling as though you were in a metropolis or a big city, and those who rarely visit the tourist attraction had decided to come and celebrate the historical date.

By 8pm, each and every corner, and stairs available at Waterfront were occupied with families, friends, love birds waiting for the auspicious time, all busily chatting among each other. The day itself was not only limited to the launching, as there were also arts and crafts exhibitions along the main road of Main Bazaar, and those looking into musical entertainment sat along the centre of Waterfront, listening to tunes by various singers.

One middle-aged man who only wants to be known as Uncle, who often patronise the tourist attraction exclaimed, “WOW I have never seen Waterfront with this many people even on a Saturday!” He explained that despite it being an attraction and there are always people there, it was never full until it became difficult even just to walk about.

The same man also revealed his thoughts on the Darul Hana Bridge, “It will be one of its kind in Malaysia and as a Sarawakian, we should really be proud of this!” seemingly thrilled, the man continued sharing his declaration to few others whom nod their heads in agreement, “Yes, you are right! Despite it being only a bridge, we are proud of it,” the person also shared that she brought her son along to witness the launch on the historical date so that her son would be able to tell it to his grandchildren next time, “Your grandfather here witnessed the launched of that bridge,” she imagined her son said.

55-years-old Sabilah, who had been opening up his make shift store selling quality t-shirts at the waterfront for almost 20 years, commented “Even though it is costly, but this bridge serves as a development for our Kuching and I hope they will continue building more of these. In my opinion, this bridge will definitely help improve the image of Sarawak instead of being dull with lack of beautiful attractions such as this.”

The enthusiastic Sabilah also shared his ideas to extend the bridge, “Maybe the state government can build a similar one leading to Kampung Boyan, or build a cable car in between,” as he was sharing his ideas he pointed out at the river, however his eyes gleamed at the sight of the beautiful view. One particular jovial guy who was sitting by the rails of Waterfront, his cheerfulness prominent from afar, business on his mind, Abdul Rahman shared how the bridge can be a magnet for tourism, hence boasting the local businesses selling at the area.

“Not only it is good for tourism, it will surely become a symbol and a famous landmark in our state and also our country!” the 34-year-old said. As the time nears 11pm, more and more people are seen at Waterfront. Some even with beach chairs brought from home to lay while they watch the fireworks happening that night.

A group of teenagers laughing and chatting out aloud, as one girl took another’s Outfit of the Night shots, or better known on Instagram as #ootn where the picture fixate at their outfits. When approached and asked for comments from the perceptive of young generations, albeit shy, each answered a one liner, “We are now able to walk to the other side compared to before!”, “During high tide, we are now able to use the bridge instead of the boat!” and one even made a joke, “The beautiful bridge makes a good Instagram picture background.”

Indeed it felt like the whole Kuching are gathering at the vicinity awaiting the grandeur moment, some 15 minutes before 11pm, crowds were seen leaning towards the rail. And when it hit the last seconds of 11.10pm, from afar, all walks of life could hear the master of ceremony shouting a countdown. 10, 9, 8, 7, 6, 5, 4, 3, 2, 1…. and out bursts fireworks in different forms, a symbol of the launch, the highlight of the night and also marks the start of the bridge’s life right at the second of 11.11pm 11 seconds on that November 11.

Aside from the fireworks, two hornbill birds in red and blue each were seen flying around the State Assembly Building and the bridge, then suddenly, they were like rockets as fireworks shoot out from them. More magnificently also there were humans on robotic figures, flying around with water bursting out from underneath as they walked around the water beneath the bridge. All in all, it was a breathtaking moment as everyone watched in awe the performances that night.

In the hearts of those present, patriotism was definitely in. The S-shaped pedestrian bridge with its sweeping curves was built to enhance North and South Kuching’s connectivity at the heart of the city’s heritage core for the benefits of both tourists and the people of Kuching.

It is supported by soaring steel cables linked to two juxtaposed hornbill-topped towers that echo both Sarawak’s traditional Bidayuh bamboo bridges and our curving river while its futuristic design and engineering innovation symbolise the dynamism of modern Sarawak. The bridge project was implemented by Sarawak Economic Development Corporation alongside PPES Works (Sarawak) Sdn Bhd, and Naim Land Sdn Bhd in a joint venture as the designing and building contractor.

The bridge’s long span, slender structures and cable stay design imposed particular design challenges that had take into account the structure’s high ratio of pedestrians to the weight and mass of the structure so as to control the impact of pedestrian movement, induced vertical, longitudinal or lateral vibrations. Comprising two viewing platforms, each 30cm long and 11m wide, they provide a shaded resting place to take a rest and enjoy the panoramic view under their custom moulded composite steel roofs whose colour echoes that of the roofs of the adjoining State Legislative Assembly Building.

No worries, I’m with Satok too: CM

Policies to continue, thanks to confidence in govt

Previous articlePat on the back for KDC
Next articleDr Rundi: Bengoh Dam structurally sound, stable

KUCHING: Six entrepreneurs were honoured at the Sarawak State...

KUCHING: There is a need for a reliable, efficient...

BY JACINTHA JOLENE KUCHING: Industry players have responded positively to...

KUCHING: Stakan will become a booming economic centre, much...

DEBAK: People here have to go to either Betong...

Jail and fine for drug trio

KUCHING: Three friends were sentenced to jail and fined...

SIBU: The energy of youth is needed to stimulate...

No worries, I’m with Satok too: CM

KUCHING: The Sarawak government will establish a new entity...

Policies to continue, thanks to confidence in govt

KUCHING: The Sarawak Government will carry on implementing its...

KUCHING: The chief minister has called on the private...