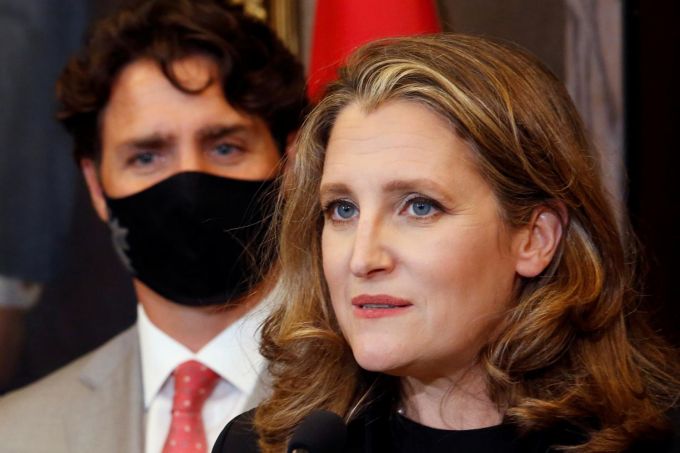 Freeland received a standing ovation after being sworn in at a small ceremony in Ottawa.

Guests socially distanced, wore face masks and Freeland greeted Trudeau with an elbow bump after taking the oath of office, telling reporters that it was “about time that we broke that glass ceiling”.

The prime minister later announced the suspension of parliament until September 23, when his minority government will lay out a new direction and test its support as confronts the impact of the coronavirus pandemic.

“We do not want an election,” Trudeau said, “but it’s obvious that the Throne Speech we gave eight months ago (outlining the government’s agenda) is no longer relevant for the reality that Canadians are living and that our government is facing.”

“We need to reset the approach of this government to build back better,” he said, “and we need to present that to Parliament and gain the confidence of Parliament to move forward on this ambitious plan.”

Freeland, 52, has held key posts in the Liberal government including deputy prime minister — a role she keeps — and foreign minister, as well as leading free trade talks with the US and Mexico.

The former journalist, first elected in 2015, takes on the top finance job as Canada goes through its worst economic crisis since the Second World War.

After five years in the post, Bill Morneau — under pressure from opposition parties — announced his surprise resignation from politics late Monday.

“It seems like the government is trying to press the reset button, and try to perhaps, put the charity affair behind them and get a fresh start with the electorate,” Stephanie Chouinard, a politics professor at the Royal Military College of Canada, told public broadcaster CBC.

In recent weeks, local media had reported a growing rift between Trudeau and Morneau on how to reboot the Canadian economy weakened by the new coronavirus pandemic, as the government budget deficit ballooned to more than C$340 billion ($257 billion).

Morneau was also being investigated by Canada’s ethics commissioner over his ties to the WE Charity tasked with distributing pandemic relief to young Canadians.

Trudeau too is being probed over his family ties to the charity, which paid his wife, brother and mother for speaking engagements.

Both Trudeau and Morneau apologised last month for the affair, saying they erred in not recusing themselves from discussions about awarding the roughly C$500 million contract to WE Charity to distribute student scholarship funds.

Morneau faced calls to step down after he revealed he had only recently paid back more than C$41,000 in travel expenses to the charity, where one of his daughters works, for humanitarian trips he and his family took in 2017.

The scholarship programme has been cancelled but the controversy remains.

In his final public remarks as an MP, Morneau denied that his departure was linked to the scandal. But opposition parties remain sceptical, saying he was made a scapegoat.

“We all know it was the scandal that brought Mr. Morneau down,” Conservative MP Pierre Poilievre said.

The Bloc Quebecois and New Democratic Party accused Trudeau of “throwing his finance minister (Morneau) under a bus”.

Bloc leader Yves-Francois Blanchet vowed to try to topple the government and trigger snap elections, but he would need the support of at least two other parties to do so.

The Tories are set to elect a new leader this week, while the New Democrats and Greens have rejected going to the polls in the midst of a global health crisis that has claimed the lives of more than 9,000 Canadians.

Opinion polls show the Liberals have been damaged by the scandal, but are still positioned well for an early election. – AFP