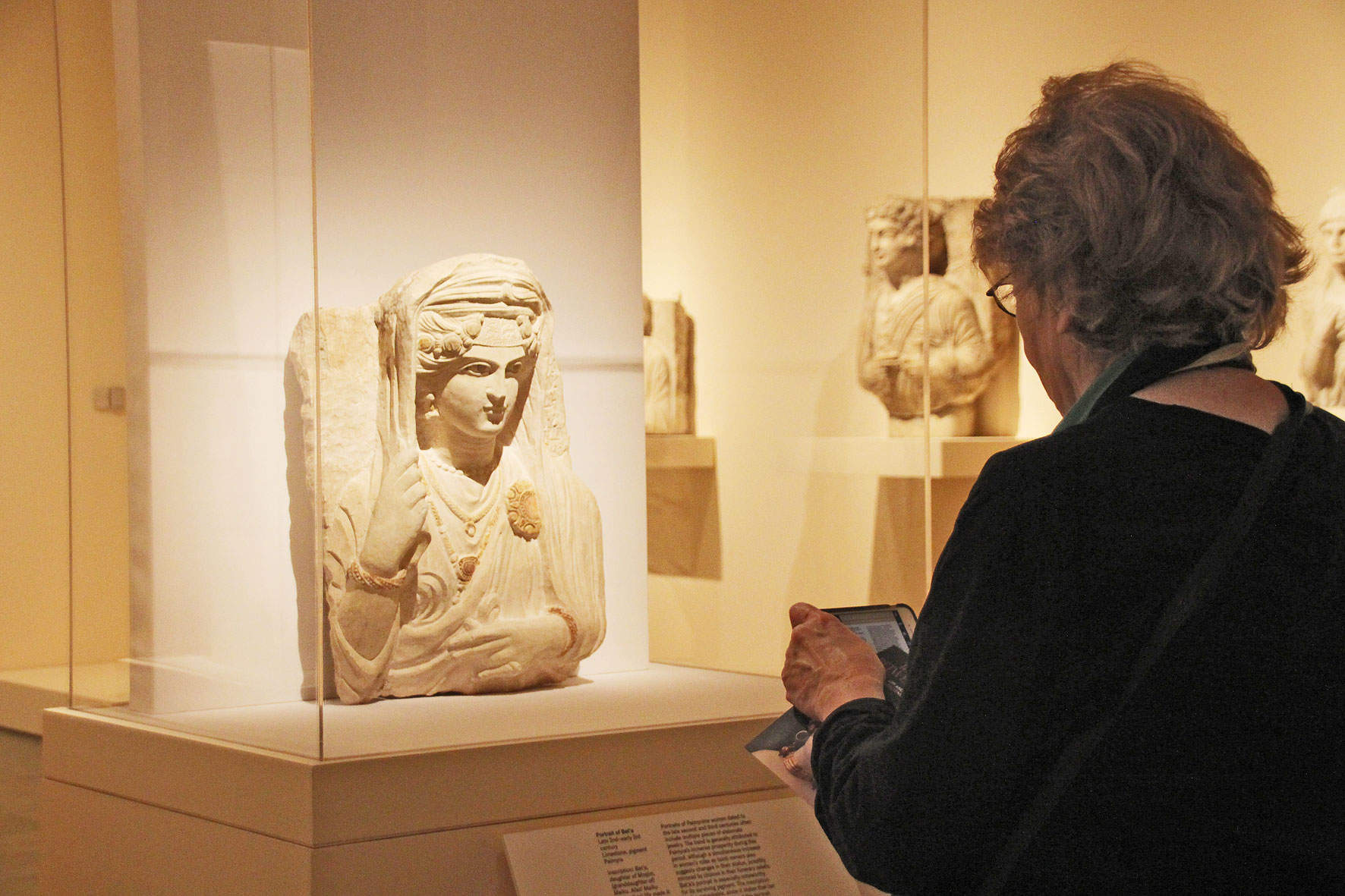 Now a dusty desert city, in its heyday Palmyra was a major trading centre that combined the Nabataean culture of Syria with Greek and Roman elemen

“The World Between Empires” at the Metropolitan Museum in New York: Visitors stand in front of an antique stone bust of Bat’a, daughter of Moqim, (granddaughter of) Malku from Palmyra, which, according to expert estimates, was created in the late 2nd or early 3rd century. Photo: dpa

Now a dusty desert city, in its heyday Palmyra was a major trading centre that combined the Nabataean culture of Syria with Greek and Roman elements. Its fabled Queen Zenobia ruled a short-lived empire in the third century AD before her attempt to take on the might of Rome ended in defeat. Palmyra’s colonnaded main street led via a triumphal arch to a fortified enclosure defending the massive temple of Bel, with its richly carved sanctuary.

But today, the city is filled with relics that fell victim to the Islamic State extremist group’s strict interpretation of Islam, namely that statues and relics are idols and must be destroyed. The al-Qaeda splinter group has demolished several ancient sites in Syria and neighbouring Iraq, in places like Palmyra, Hatra and Dura Europos.

This deliberate destruction of excavation sites, monuments and museums in Syria and Iraq, among other countries, is the subject of a major new exhibition in New York. The New York Metropolitan Museum’s “The World Between Empires” will feature around 190 antique sculptures, murals, pieces of jewellery and other objects from the Middle East from Monday to June 23.

On the one hand, the exhibition deals with culture, religion and trade in antiquity, but on the other it also raises “complex questions about the preservation of cultural heritage,” says museum director Max Hollein.

The New York Metropolitan Museum at Central Park in Manhattan is one of the most renowned and most visited museums in the world.

Since last year, the Austrian native has been director of the museum. Ancient sites destroyed by extremist groups around the world Islamic State, Taliban and other extremist groups have waged war against cultural artefacts and centuries-old Christian and Muslim shrines, damaging or destroying them with bulldozers, dynamite and pickaxes.

PALMYRA: Islamic State extremists damaged several of the ancient Syrian city’s historic buildings and artefacts in 2015, including the Temple of Bel, the smaller Temple of Baal-Shamin and the Triumphal Arch. A series of elaborately decorated tower tombs on the outskirts where the elite of ancient Palmyra buried their dead were mostly reduced to rubble. In January 2017, the militants destroyed the Tetrapylon Roman monument in Palmyra, dating back to 270 AD. The United Nations decried the Tetrapylon’s destruction as a war crime.

KHORSABAD: By March 2015, Khorsabad, an Iraqi ancient site near Mosul, became the third historical site attacked by the Islamic State in a short period. Khorsabad was founded as an Assyrian capital by King Sargon II in 717 BC and is famed for its carved stone.

NINEVEH: In early 2015, Islamic State destroyed ancient Assyrian statues housed in a museum in Mosul, northern Iraq, and at excavation sites in Nineveh. The jihadists demolished part of Hatra, another World Heritage Site and allegedly bulldozed the historic city of Nimrud, south of Mosul. TIMBUKTU: In northern Mali, Islamist insurgent group Ansar Dine demolished 14 of the city’s 16 ancient mausoleums in 2012. The mausoleums were part of Timbuktu’s UN World Heritage Site. The group claimed the buildings were monuments to false idols. UNESCO said the mausoleums can be rebuilt.

BAMIYAN VALLEY: In 2001, the Taliban blew up two centuries-old Buddha statues in Bamiyan province during their regime. Carved into the cliffs of the Bamiyan Valley, the 55-metre- and 33-metre-tall statues witnessed Afghanistan’s pre-Islamic past. AYODHYA: In 1992, Hindu fanatics destroyed the Babri Masjid, a medieval mosque in the northern Indian state of Uttar Pradesh, in order to build a temple, claiming the site marked the birthplace of the Hindu god, Rama. – dpa

I am a web developer who is working as a freelancer. I am living in Saigon, a crowded city of Vietnam. I am promoting for http://sneeit.com