Propelling Sarawak to the next level 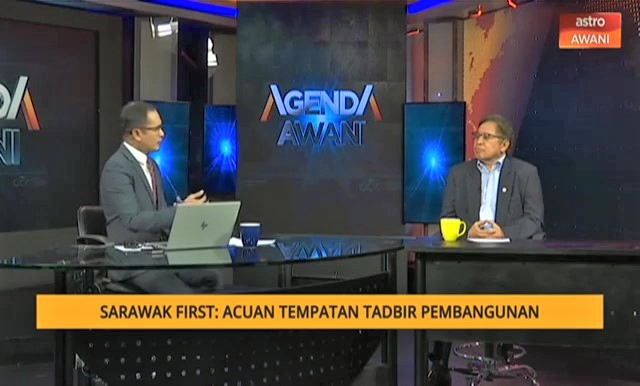 In this recent interview with Astro Awani, Chief Minister Datuk Patinggi Abang Johari Tun Openg talks about his achievements in the last three years as the state’s chief executive, upcoming development projects, his vision for Sarawak and its people, and what the future holds for Malaysia’s biggest state.

Abang Johari talks about his pet projects, including digital economy, smart agriculture, Internet of Things (IoT) and Artificial Intelligence (AI). He also explains the importance of solidarity among the people.

Question: You started the ‘Sarawakku Sayang’ programme starting this year after three years leading the state’s administration. What is your next goal?

Abang Johari: After taking over the state administration from the late Tok Nan (Pehin Sri Adenan Satem) in 2017, I devised several strategic approaches.

First, we acquired the Bakun hydroelectric power (HEP) dam from the federal government because we need to supply competitive energy. Second, rural transformation by developing strategic infrastructure and promoting economic development; and third, build and improve roads, and supply electricity and water to rural villages and longhouses.

In addition, I have also emphasised technological advances, especially in the manufacturing and production sectors. So in 2017, I brought in some digital experts to Sarawak, to share their knowledge about blockchain and the relationships and importance of digital infrastructure strategies. After that, I launched Sarawak International Digital Economy Conference (Idecs).

After developing strategic approaches, the second thing I did was generate revenue. In 2018, we began to move the legal framework including the establishment of the Sarawak Multimedia Authority (SMA) for which I gave RM1 billion to upgrade internet speed.

In addition, last year, we also had a large budget to roll out identified projects. For this year, I expect that under the 12th Malaysia Plan (12MP) we will continue with these strategic developments. The 13MP will add value to the developments we have decided on.

Last year, you gave Sarawak a new mould with the introduction of ‘Sarawak First’. What exactly do you want to achieve?

I have looked at countries such as Germany, Canada, Australia and India, which have federal systems of government. In Germany, there is a place called Bavaria. It is so advanced and it has become a leading engine of German economy. So is Italy, where Ducati is the driving force of the economy. So, for me, in order to impact Sarawak’s economy, we have to use the mould that we have. Sarawak is well-known for its strong unity among its multiracial and religious people besides having abundant natural resources and beautiful sceneries. So, with these advantages coupled with human skills and expertise (which needs to be improved), we can certainly drive the state economy and improve the quality of life of the people.

By doing some market research, besides using the model developed by Jack Ma, Amazon or eBay, as examples, I think we can definitely improve Sarawak’s economic status. However, we need to understand this approach, which is why I am putting basic infrastructure development first. If Sarawak is to advance, so is Malaysia, but we must have a high level of discipline.

After 36 months of leading the state government, are you satisfied with the support of the administration, ministers, and civil servants?

I have exposed our civil servants to this recent situation and I am thankful that they are able to understand our intentions and goals. Therefore, I will continue to send them to the best institutions, including Harvard (for short three-month courses). In addition, civil servants should also be aware of working under the new administration. For example, to transform existing agriculture into smart agriculture, civil servants in the related departments must be aware of the Internet of Things (IoT), Artificial Intelligence (AI) and new disciplines including ‘analytic data’ and ‘big data’. I hope civil servants, especially the young ones, can use them to transform what I have just said.

Apart from that, I have recently received an approval from Yayasan Sarawak for us to train young people. Each year we are able to send two of our best students to the London School of Economics (LSE) and Cambridge. Right now we are in talks with Stanford University, USA, to get two more places for us to place our undergraduate students every year. If they get good results, we will provide first grade aid through Yayasan Sarawak. Therefore, for this purpose I would like to develop five international schools (using Cambridge syllabus). Currently, existing international schools only cater for the rich while many of our intelligent children are from families of farmers and fishermen. So, with the development of these new international schools, we will be able to get our excellent students from less fortunate families to study there with government help.

As we know, Sarawak is rich in natural resources (such as timber). How do you want to strike a balance between development and environmental sustainability?

Tok Nan once told me to take care of Sarawak, so that’s what I have been doing – taking his advice. In this regard, we already have a State Land Use Policy which sets out how much land is used for agriculture, timber industry and so on. That is why we no longer issue permits to develop oil palm plantations because the allocation of land for that purpose is already sufficient. Today, we use land for agricultural purposes and food production (which has a more eco-friendly process).

In addition, we have set up national parks including marine parks. We have allocated RM60 million for the deployment of artificial reef balls to help generate more marine life. Another thing is that we are also selective in tourism offerings because too many can be harmful to the environment.

Since you led the state administration, Sarawak has the highest budget and reserves in Malaysia. Recently, you also announced a two-month bonus for state civil servants. So, how do you manage existing state assets and at the same time increase the state’s revenue?

We are grateful that we have a very good financial management. In fact, we (Sarawak) have been awarded ‘A-‘ rating by S&P Global Ratings for our stable earnings outlook. From the economic point of view, three important things that I emphasise are consumption, investment and savings.

When I announced the two-month bonus for Sarawak’s civil servants, I already thought about the consequences in advance. It would create a positive economic climate as they (civil servants) would spend money at local shops which would help local businesses. After all, we already have an e-wallet system. As of Nov 2019, the total transaction value is RM164 million. With this technology at our fingertips, in the future, our farmers will be able to get paid directly (online) and this will facilitate the state’s economic journey.

Many people expect you to make big decisions this year as the current State Legislative Assembly’s term will end in July next year. Given the current economic uncertainty, what political decision will you take to hold the Sarawak state election?

My decision is based on ‘Sarawak First’. I do not know when the state election will take place. What is important is that we will continue to focus on development projects which we have planned.

In addition, I will also train future leaders. This is important because inexperienced leaders tend to make emotional decisions. We (state government) already have a plan, just wait and see what we will do.

How do you see the strength of Gabungan Parti Sarawak (GPS) to propel Sarawak forward in the context of ‘Sarawakku Sayang’ and Sarawak First?

We (the parties within GPS) love Sarawak and we will continue our friendly relations with Putrajaya. That is why we choose to make a consensus decision (after learning from past experiences).

Finally, what is your advice to the people of Sarawak as we are already in 2020?

I’ve been the chief minister for three years this year. In the past, we had the 2020 vision and it was achieved. So this year, I basically want to develop Sarawak from 2020 to 2030. But what’s important is the cooperation of the people of Sarawak. Strong solidarity in our state has helped the people a lot. Apart from that, I have also set up a Unit for Other Religions (Unifor) to help non-Muslims build their houses of worship. With this in place, 2030 is something we can achieve.

MIRI: A man is lucky to have escaped what could have been a potentially deadly attack. He was almost bitten by a cobra — an...

SARIKEI: The Sarawak government through the ‘Sarawak Multimedia Authority...

KUCHING: The mainstream media must not sacrifice the use...

KUCHING: Telling a story that attracts the interest of...

KUCHING: Media organisations must be open and willing to...

KUCHING: The Intangible Cultural Heritage (ICH) can play an...

MIRI: A man is lucky to have escaped what...

BINTULU: A 40-year-old woman died while two others were...