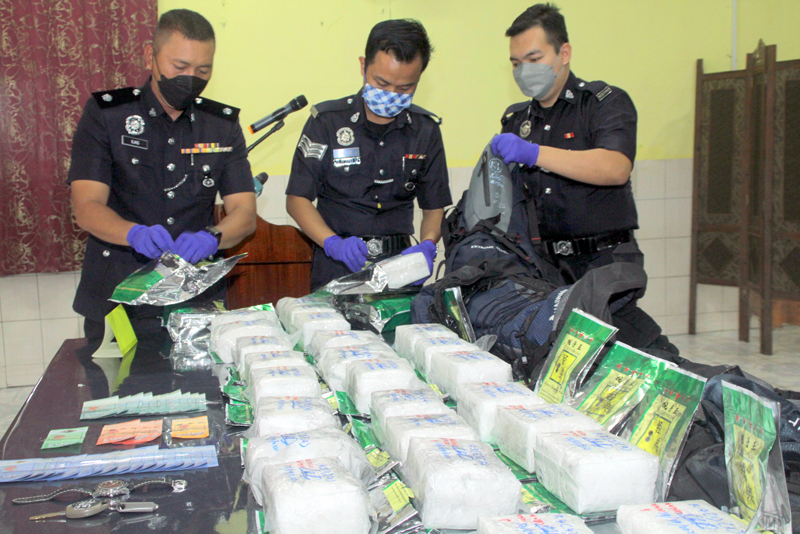 SERIAN: Sarawak police recorded their biggest drug bust this year in the district with the seizure of syabu, weighing 36kg, worth a whopping RM1.29 m

SERIAN: Sarawak police recorded their biggest drug bust this year in the district with the seizure of syabu, weighing 36kg, worth a whopping RM1.29 million, which were meant to be delivered to the Indonesian market.

Sarawak Police Commissioner Datuk Aidi Ismail told a press conference at the Serian police headquarters on Tuesday (Sept 21) that the drugs, believed to be from Miri, could satisfy about 36,000 addicts.

On Sept 18, a General Operations Force patrol team spotted a suspicious multi-purpose vehicle heading towards the Immigration, Customs, Quarantine and Security Complex in Tebedu. Later, it turned back around and headed towards Serian.

“The 5am incident prompted the team to chase the vehicle driven by a local man. They managed to stop it for inspections at KM8 near Kampung Sejijak.

“It led to the finding of 36 packets containing drugs, believed to be syabu, stored inside four backpacks, which were seized as evidence. Also seized were the vehicle, a watch and cash amounting to RM572,” said Aidi.

The suspect, a 48-year-old, unemployed from Miri, has a past record related to drugs and has remanded for further investigation until Sept 25.

Aidi added that the suspect, who tested positive for drugs, admitted to being involved in drug abuse since 2018. He has also been involved in drug distribution to Indonesia since April this year.

“During interrogation, the suspect admitted to delivering the drugs to an unknown Indonesian man who will pay him RM2,000 per kilogramme delivered.

“He had already made four delivery transactions, with about 18kg of drugs for each transaction. However, his fifth delivery attempt was thwarted by the police,” said the police commissioner.

The case is being investigated under Section 39B of the Dangerous Drugs Act 1952, which carries a mandatory death sentence or life imprisonment and whipping if the culprit is not sentenced to mandatory death.

Aidi added that the Sarawak police would continue to block and eradicate drug distribution activities in the district.

PRS may nominate a woman candidate in GE14