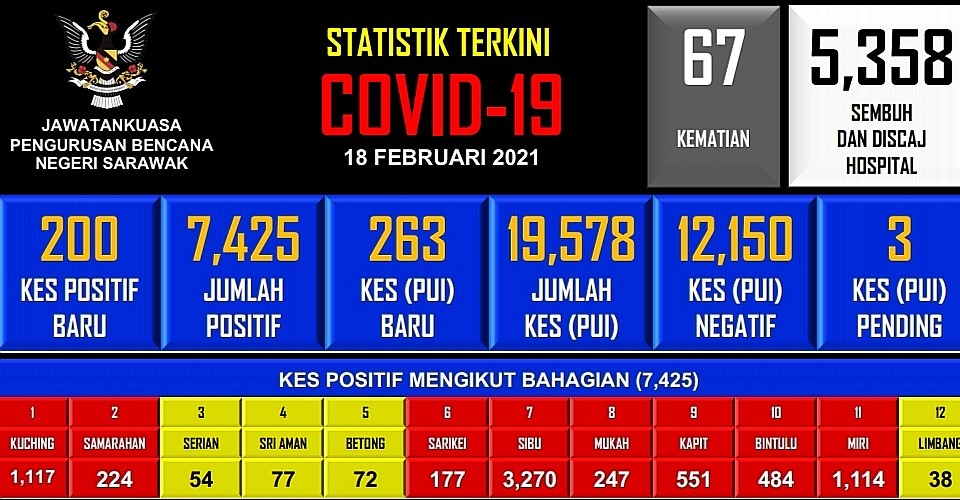 This is the third highest daily record after the 270 cases recorded on Feb 4.

At the same time, the state also recorded two more Covid-19 related deaths, bringing the total number of fatalities so far to 67.

“Of the 120 cases in Sibu District, 62 were from individual screenings, 56 were close contacts screened from active case detection (ACD), one from individual with symptoms and one involved a medical worker at a health facility, while all cases in Kanowit were from ACD.

“In Kuching, 10 cases involved the Kampung Sungai Maong cluster, five from individual screenings, one import case C from Dalat, and one import case A involving an Indian national from the country of origin,” it said in a daily Covid-19 update statement.

All cases in Sebauh, Kapit, Sri Aman, Bintulu and Subis were from ACD while all cases in Bukit Mabong involved the Gelong Cluster.

One case in Betong involved a medical worker while one case in Julau involved the Nanga Lijan Cluster.

Clusters in the state

From the total number of cases recorded today, 22 were linked to the existing clusters in Sarawak.

There were 22 active clusters in the state at present namely, Jan Yong and Gelong in Kapit; Geronggang, Mas Merah and Pasai in Sibu with an addition of a sub cluster called Tangap in Subis; Univista in Samarahan; Kampung Sungai Maong, Indah Riang and Stutong in Kuching; Kidurong Dua and Jun Heng in Bintulu; Nanga Lijan in Julau; Seruas in Beluru; Sebangkoi in Sri Aman; Bintang Daily in Meradong; Jalan Pengiran in Matu; Tabong in Bau; Bedayan in Serian; Rakut, Jelita and Bah Sayap in Miri; and Bukit Sekubong in Sebauh.

SDMC also said 154 cases had recovered and been discharged from hospitals today– 70 from Sibu Hospital, 25 from Sarikei Hospital, 20 from Bintulu Hospital, 18 from PKRC under Kapit Hospital, 13 from Miri Hospital, seven from Sarawak General Hospital (SGH), and one from Limbang Hospital.

“This brings the total number of recovered and discharged cases to 5,358 or 72.16 percent of total Covid-19 cases in Sarawak,” it pointed out.

Sri Aman District has changed status from orange to yellow today after reporting only 16 cases of local infection in the last 14 days.

In orange is Lundu district with 28 cases of local infection reported in the same period.

Twelve other districts are green.

Previous articleTargetting RM300,000 sales by year-end
Next articleDaily sanitisation at markets and tamu in Miri