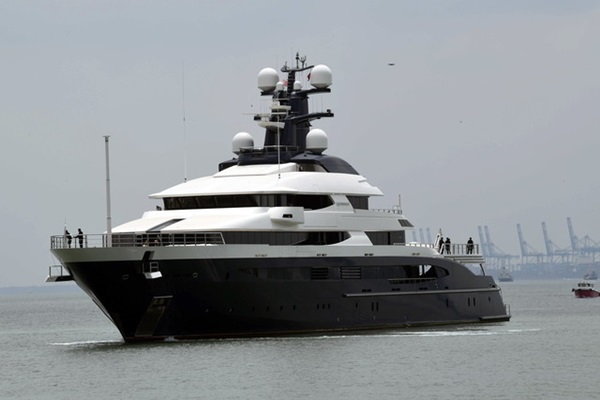 KUALA LUMPUR: The super yacht Equanimity is to be sold to Genting Malaysia Bhd or its special purpose vehicle (SPV) company at the price of USD126 million (RM514.14 million).

The Admiralty Court in Kuala Lumpur today approved for acceptance, the offer by Genting to purchase the Equanimity on the Sheriff’s Terms and Conditions. The USD126 million purchase price will be paid by Genting, and received by Court, by the end of April 2019.

“This will rank as the highest recovery to date for the government of Malaysia from the 1MDB scandal; within a mere eight months from the commencement of this action. This USD126 million is the best offer received over the five months, from October 2018, when the Equanimity was first put up for sale.

“Many offers were received in this period, and a few were over USD100 million. It was Genting, however, that offered the highest price, that was today approved by court for acceptance,” a statement from Attorney-General Tommy Thomas said.

According to the statement, as the Genting offer was negotiated directly with the government of Malaysia, no agency commission is payable; resulting in a savings of about USD4.4 million. In consequence, although the Winterbothams’ market price evaluation of the Equanimity at USD130 million was not reached, the nett return to the government of Malaysia is as good if not more, than envisaged.

“This judicial sale at USD126 million is historic, by any measure. It records a high-water mark for our judicial system in ensuring that market value is secured for a vessel sold through the processes of court, without any discount,” it said.

The statement also said that the legal team representing the government acted beyond the call of duty, travelling to meet potential buyers in Hong Kong and London, bearing travel costs personally; to ensure the widest possible outreach and a better understanding of the circumstances of the sale.

“Their efforts were complemented by the prompt and steady co-operation of the Court Sheriff; and the professionalism and readiness of the Admiralty Judge to respond to vastly extraordinary circumstances. The navy was magnanimous in affording prime space in Langkawi for the docking of the Equanimity over five months, free of any charges.

“The navy, together with the Malaysian police, ensured the security and safety of the vessel whilst under arrest, even carefully escorting her during sea trials by prospective buyers.

“The Government of Malaysia is most grateful for this, for it helped tremendously in keeping down the costs of maintaining the Equanimity under arrest,” it said.

“For transparency, a further statement will be issued once the purchase price is received, with a breakdown of the expenses incurred, and the nett amount to be credited into the newly opened 1MDB asset recovery account.

“The government of Malaysia is appreciative of the offer by Genting. That the Equanimity is purchased at the market value of USD126 million by the Genting Group which owns a shipyard that builds super yachts and operates a luxury yacht chartering division is significant,” the statement said. –  Bernama