KUCHING: A question was yesterday put to Deputy Chief Minister Tan Sri Dr James Jemut Masing pertaining to the ongoing squabbles over oil and gas between the federal government, Sabah and Sarawak.

In his learned opinion, Dr Shad posited that the federal government must resolve the disputes with the two Borneo states to stop them from turning into a bigger and more complicated crisis.

“Yes, indeed the federal government must do that once and for all,” said Masing.

“I agree with his (Dr Shad’s) assessment. Settle the dispute now or as soon as possible. If not, Malaysia will have serious trouble with the Bornean states.”

He argued that Sabahans and Sarawakians cannot forever live on unfair division of natural resources, revenues and opportunities.

“It is unfair and unacceptable that the poor, especially those who happen to be owners of certain important assets (oil and gas in Sarawak’s case) cannot go on subsidising the rich,” he told New Sarawak Tribune when contacted yesterday (July 25).

Masing, who is also Baleh assemblyman, also reckoned that since laws are man-made, they can be unmade (amended) by lawmakers for the betterment of the country and its citizens.

“The laws are clear on who own our oil and gas. There is no dispute on it. If there is a dispute, where is it? The oil and gas that we are talking about are in Sarawak, not in Malaya or elsewhere.

“What are in the way are material and political machinations and greed. Resolving the mess is easier said than done, but if we don’t settle it now, Malaysia as a nation will sooner or later face bigger problems,” he said.

During the webinar, Dr Shad was of the view that in a federal system of government, the federal government should be open to discussion and to (constitutional) amendment.

“We need to evolve on issues pertaining to petroleum, oil and oil fields which should be renegotiated. I sympathise with the complainants (Sabah and Sarawak) which often ask, ‘How can you (Malaya) just give us five percent?

“But it needs a rewriting of the constitution, which is not impossible if Sabah and Sarawak are agreeable (to it) and the federal government can come around.” 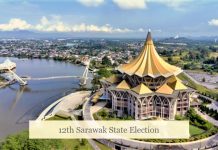 No need for intervention from Agong, TYT