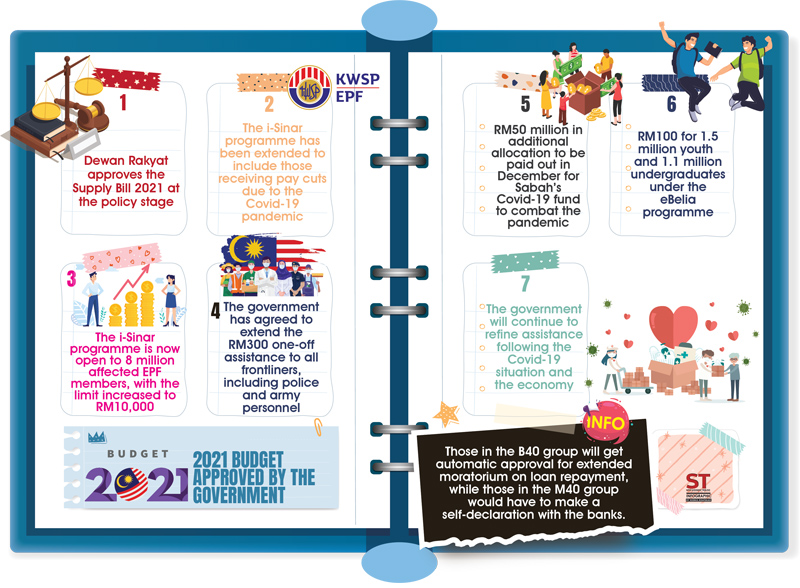 KUALA LUMPUR: After two weeks of debate and four days of winding-up session by the relevant ministers at the Dewan Rakyat, the Supply Bill or 2021 Budget was passed at the policy stage today.

It was approved with a majority voice vote after attempts by several MPs to initiate bloc voting failed when only 13 MPs stood up, less than the required 15.

The budget, the first by the Perikatan Nasional government, was tabled by Finance Minister Tengku Datuk Seri Zafrul Tengku Abdul Aziz on Nov 6 and 82 MPs spoke during the debate from Nov 9 to 19.

An allocation totalling RM322.5 billion was proposed under the budget, making it the biggest ever in the country’s history, mainly to help the government to handle and cushion the economic impact of the Covid-19 pandemic on the people and the country.

Of the total, RM236.5 billion (73.3 percent) will be channelled to operating expenditure, RM69 billion or 21.4 percent to development expenditure and RM17 billion (5.3 percent) to the Covid-19 Fund.

According to the Dewan Rakyat calendar, the budget will be debated at the committee stage for 10 days starting Monday.

Tengku Zafrul, when winding up the debate of the budget, attracted the attention of the MPs by, among others, announcing that some amendments would be made to the budget at the committee stage.

On the issue of Employees Provident Fund (EPF) withdrawal, he said the i-Sinar programme which allows the withdrawal from Account 1 is now open to all eight million EPF contributors with the maximum amount of RM10,000.

He said the government had also approved an additional allocation of RM50 million to Sabah government to fight Covid-19 which will be channelled by December through the Covid-19 Fund.

Apart from that, the government also agreed to increase the amount of assistance from RM50 to RM100 per person under the eBelia initiative to 1.1 million students at public and private institutions of higher education, including those aged above 20.

The winding-up session, which lasted over an hour, was also not spared from a series of interjection and war of words among the MPs who demanded further explanations from the minister.

Among them was Khalid Samad (PH-Shah Alam) who claimed that the previous statement made by the government that the budget was formulated with involvement from all quarters was false.

“This is a forgery of facts, only one time that we (the opposition) were engaged in the discussion before the budget was tabled…the minister proudly said that the budget involved all quarters, that will solve the country’s economic issues, but this is a lie,” he said.

His remarks, however, were countered by the government backbenchers who said that during the Pakatan Harapan administration, not once that the opposition was called to be involved in the formulation of the national budget.

Earlier, Datuk Seri Mukhriz Tun Mahathir (Bebas-Jerlun) asked for a clarification on the amount of allocation involved in the amendments announced by Tengku Zafrul.

Meanwhile, Datuk Seri Abdul Azeez Abdul Rahim (BN-Baling), rapped the opposition by likening the winding-up session to a football game where the government is winning with the people as the 12th player.

“If this was a football game, the government already won by 7-0 as it (2021 Budget) was tabled for the wellbeing of the people, besides to uphold the King’s decree for us to support it. So, if anyone refuses to support the budget, then let the people judge,” he said. – Bernama