HOLDING the crown, it is not a mere award, rather each and every intricacy of the crown entails the responsibility of those who holds it. It is the same for those that are known as ‘pageant girls’. Exteriorly, they are to be beautiful, to have a good reputation, maintaining the perfect image, however, being crowned is more than that. Ennette Faith Solomon, an 18- year-old Eurasian Iban, during her first experience joining Miss Sarawak Earth 2017 and later Miss Malaysia Earth 2017, she was given a title at each competition.

It started earlier in the year, after her Sijil Pelajaran Malaysia (SPM) 2016, out of boredom, Ennette decided to join a beauty pageant organised by BR Empire Creations. The pageant is known as Miss Sarawak Earth where its winner would represent Sarawak at national level to Ipoh, Perak Darul Ridzuan. Being her first time, Ennette did not put much hope in winning, and she did not expect to win the title as well. “I scrolled Facebook one day, and out of boredom I snap a photo and sent it to the organiser.

The next thing I knew, I received an email stating that I was among the finalists”, she shared. Throughout the interview, she appears to be cheerful, the optimistic Ennette disclosed also how she was unexpectedly chosen during a pre-judging evaluation held at Sarawak Plaza where she was among the finalist due for coronation at Telang Usan Hotel, Kuching on 17 – 18 June.

Judged on her interpersonal skills, personalities, talents and knowledge pertaining the environment, Ennette was put to a task on ‘Beauty for a Cause’ where she describes her ventures in sustaining mother earth. Crowned as Miss Sarawak Earth 2017, Ennette alongside her four compatriots (Jean Seymour Harry, Vivianna Jimbun, Marzella Sigai and Maria Madelina Sujie) represented Sarawak at the national level to join Miss Malaysia Earth held in Ipoh on July 20 – 31. “When we were there, each and every one of us were very new with the pageant system, we had to start from the bottom. We were taught and train again in our runway skills, grooming and the likes.

We started our pageant camp in about 10 days prior to the coronation night of Miss Malaysia Earth. Even before the official Miss Malaysia Earth pageant camp started, we had a few days of intensive course prepared by our State Director (BR Empire Creations) which include runway skills, makeup class, social etiquette exposure, countless photo shoot/video shoot and wardrobes fitting session. It was to be honest, hectic though it serves as a good experience for me. As a green horn in this industry, my team mates and I are blessed to be surrounded with people who has helped, supported and managed us with so much love and passion. The people behind Sarawak’s victory – BR Empire Creations! I would also like to express my sincere condolence to the families and friends of one of the most important individual in BR Empire Creations, the late Sir Joseph Telajan. I am so happy that he managed to witness our success before his last breath, just after the national event ended. May you rest in peace, Sir. And I dedicate this winning title for you”, said the 18-year-old.

The Miss Malaysia Earth Eco- Tourism 2017 described the moment when she was crowned, “This is not just about being a queen and taking the crown – you have to be responsible for your title! When I won, I am not sure whether I was ready to hold such big responsibilities, then I was like okay LET’S GO!”. Admittedly, Ennette shared how she was a reserve person before joining the pageants. “I normally stay home and I do not mix around with people much”, she laughs as she further share the aftermath of winning the crown.

“And now, I get to know tonnes of people! And made tonnes of friends!”, she chuckled. Furthermore, Ennette started appreciating the art of make-up and how she dresses in public as she understands how important ones image are as in the eyes of the beholder, it is what they will use as first impression of another.

Being in contract as Miss Sarawak Earth (for a year) and Miss Malaysia Earth Eco- Tourism (for two years), Ennette is dedicated to conducting activities according to her advocacy which is “raised in an eco-tourism environment, I believe in sustaining it, respect the earth as we are its inhabitants.” In her recent event she had in collaboration with Sarawak Creative Society, she organised a talk at SMK Semerah Padi, sharing with the students regarding environmental awareness and on the importance of recycling in our daily life. She added, “I learnt how and the importance to always be ourselves no matter where we are. From the pageants, I realised how easy to notice when people are faking themselves”, albeit general, people tend to forget those few life lessons until they experience it first-hand themselves. Growing up in a Christian family, Ennette’s life motivator is God, whom she would go to in harsh times. Apart from that, her family is as important to her as they support her since day one.

“Before I entered Miss Sarawak Earth, I told my parents that they MUST support me as I know it will be tough. My father said ‘no problem, anything for you as long as you can gain experience’ while my mother during the coronation night at Telang Usan revealed how happy and proud she was for me as aside from gaining experience, I also grew maturely she said despite my young age”, a very happy Ennette said. As for the future, Ennette will be joining an international pageant before passing her crown to its successor. While doing that, she is also studying to complete her diploma.

The delegates and winners give meaning and relevance to this beauty competition by promotion worthwhile environment causes and getting actively involved in caring for the preservation of Mother Earth. Miss Malaysia Earth 2017 foster vital elements that help women to build networking, meeting new friends, build their confidence and emotion. The goals of this event are to promote a healthy balance between mind, body and soul, to increase awareness and better understanding among individuals, public and relevant agencies on the issue of environmental- related issues, saving Mother Nature, education and promoting awareness on environment and creating a healthy lifestyle. The Miss Malaysia Earth 2017 beauty pageant competition started on July 20 at Syeun Hotel, Ipoh.

Miss Malaysia Earth is the only pageant which has individual titles for the runners-up. The winner of Miss Malaysia Earth 2017, Cherish Ng of Penang will serve as the Ambassador to environmental protection campaigns nationwide, and will have the right to represent Malaysia at the international level of Miss Earth 2017 beauty pageant competition which will be held later this year in Manila, Philippines. Ennette can be reached via social media at Facebook Ennette Faith Solomon and Instagram @__exfxs_ ___. For any enquiries pertaining to appearance, collaborations, invitation, spokesperson and the likes, her management team can be reached via email amazingkulture@ gmail.com or Miss Sarawak Earth (Facebook) or @misssarawakearth (instagram). 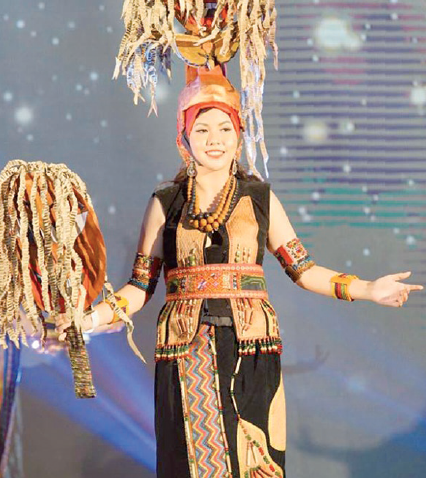 KUCHING: The Sarawak Government will continue to strengthen the state’s constitutional status as a regional partner in the Federation of Malaysia. Chief Minister Datuk Patinggi...

Govt can depend on civil service to deliver: Jaul

Rural projects ready for use

KUCHING: Although much of the land in Sarawak is...

KUCHING: A local man was sentenced to eight months...

RM4,500 fine for slapping ex-wife and damaging her friend’s car

KUCHING: A local man was penalised with a fine...

Close rapport between rep and agencies vital for progress

Those who make peaceful revolution impossible will make violent...

KUCHING: The Sarawak Government will continue to strengthen the...

KUCHING: More good news for the people of Sarawak. The...

Govt can depend on civil service to deliver: Jaul

KUCHING: The Sarawak government can rely on its civil...