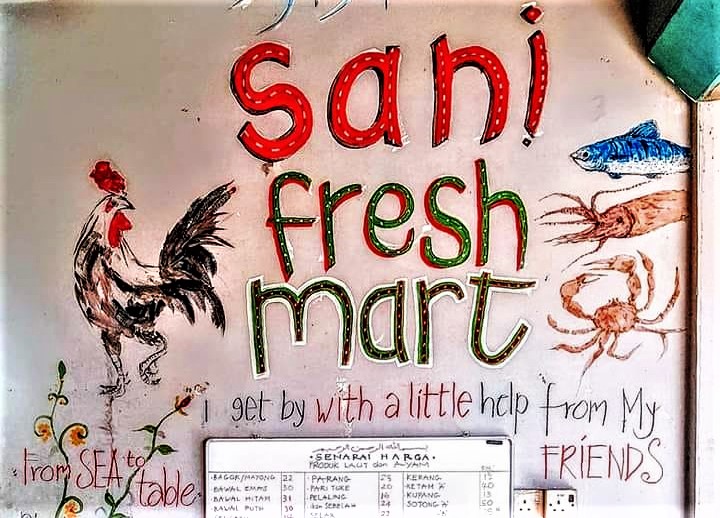 From canopy rental to fish retail

KUALA LUMPUR: Sani Shamsuddin’s canopy rental business, which he established seven years ago, took a beating after restrictions were imposed on the holding of gatherings and functions early last year to stem the transmission of the Covid-19 virus.

Instead of wallowing in self-pity, the 35-year-old entrepreneur immediately set his mind on exploring new business opportunities.

A chance encounter with a friend, who had taken to selling fresh fish after being forced to give up his catering business due to the pandemic, inspired Sani to tread in his pal’s footsteps.

Having embarked on his fish retail enterprise last October, this industrious young man is now able to sell up to 500 kilogrammes of fish a day.

He has even opened a mini-market called Sani Freshmart in Section 7, Shah Alam where he sells a variety of fish such as sardine, ikan merah, cencaru, pelaling, kerisi, tongkol, siakap, jenahak, bawal, kerapu and pari tuke, as well as other types of seafood and vegetables at reasonable prices.

Sani told Bernama he had no prior experience in selling fish and neither was he familiar with the different types of fish available in the market.

“My decision to go into this business was sudden… initially, I had to take my father with me to buy my fish supplies from the jetty at Sekinchan (a fishing village in Kuala Selangor, Selangor) as I wasn’t familiar with the different types of fish,” he said.

On the first day of business, Sani bought RM4,000 worth of fish but had reservations about whether he could sell the entire stock.

Since he did not have a shop or site to market the fish then, he sold it to the people staying near his parents’ house in Shah Alam. The encouraging response he received fired his enthusiasm and motivated him to learn the ins and outs of the fish retail business.

“I also learned a lot from my father who used to own a restaurant and was more familiar with fish. I also learned about the different types of fish from the traders at the jetty and also how to take care of my stock and clean the fish, as well as the fish varieties favoured by the public,” he added.

He said he plied his trade from his lorry by the roadside in Shah Alam for a few months before opening his mini-market.

Although he was treading on unfamiliar territory, Sani succeeded in adapting himself to the new business routine and pattern.

Recalling the trials and tribulations he went through last year, Sani said he would not have made it without the support of his family, especially his wife who was his pillar of strength.

“Without their support, I could have gone into depression,” he said, adding that his canopy rental company, which offered its services nationwide, used to rake in a profit of RM60,000 a month before the enforcement of the movement control order (MCO) on March 18 last year.

Sani said he suffered huge losses as he had to refund his customers who had made advance payments or paid a deposit for canopy rental for various functions that had to be cancelled due to the MCO.

Despite the hardship he faced, he retained his workers and even dipped into his savings to give them a small bonus during the festive season.

“The challenges I faced taught me how important it is for us to be mentally and financially prepared always because unexpected things can happen to us anytime,” he said, adding that it was fortunate he had savings as he had been prudent in his spending when he ran his lucrative canopy rental business.

Not wanting to be left out of the opportunities presented by social media, Sani also promotes his fish retail business on Facebook, Instagram and WhatsApp. He has even introduced his own Sani Freshmart mobile application that can be downloaded via Google Play.

“My customers just have to order online and the items will be delivered to their desired location,” he said, adding that although he still lacks the skills and confidence, he has taken to broadcasting live videos of his business on Facebook and Instagram.

“Some people have remarked why post live videos of me selling fish on Facebook but to me, social media has a very strong impact… this is because if a person watches and shares (what I post), slowly many people will come to know of Sani Freshmart,” he added.

Sani said even after the Covid-19 pandemic ends and he is able to restart his canopy rental business, he would not give up selling fish and hopes to open another Sani Freshmart outlet.

“Currently, my mini-market operates from 7.45 am to 2 pm but I hope to lengthen the operating hours till night. For this, I will need to increase my fish supplies and the number of workers,” he said.

Urging those in the event management and tourism industries whose businesses suffered during the pandemic to “emerge from their comfort zone”, he said they should strive to look for alternative sources of income.

“If you think it’s hard to start a new venture, then go and learn. Don’t be lazy and fearful because whatever it is you do, it will yield results,” he added. – Bernama