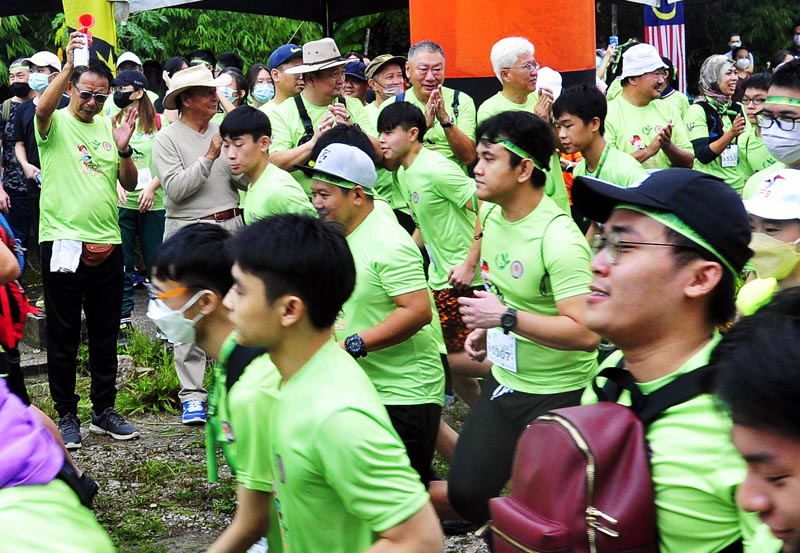 Locals, foreigners among 800 in run

KUCHING: Some 800 participants comprising locals and foreigners partook in the Matang Warrior Trail Run which was held at Matang Scout Camp in Kubah

KUCHING: Some 800 participants comprising locals and foreigners partook in the Matang Warrior Trail Run which was held at Matang Scout Camp in Kubah National Park yesterday.

Apart from those coming from Malaya, there were eager contestants coming all the way from France and Netherlands.

Given the honour to flag off the run was Minister for Tourism, Creative Industry and Performing Arts, Youth, Sports and Entrepreneur Development Datuk Seri Abdul Karim Rahman Hamzah.

The minister said that he was very pleased and happy to see such a huge turnout at the inaugural Matang Warrior Trail Run 2022 event.

“On a Sunday morning, in the large jungle of Matang, so many are down where they are all eager to run.

“We are excited and happy to see the participants numbering about 800 who have registered in all three events,” he said.

The Scout Association Malaysia, Sarawak Branch through strategic collaboration with the Ministry of Youth, Sports and Entrepreneur Development and Sarawak Forestry Corporation organised the inaugural run.

Abdul Karim, therefore, hoped the Scout Council and other organisations would come up with healthy events for the families.

“This will be good for family bonding because I can see many families bringing their children to run and it is certainly very healthy for them,” he said.

Later, Abdul Karim presented the prizes to the winners who participated in various categories of the run.

In the Men’s 10km category, the champion was Muhammad Shahir Abdran and followed respectively in second and third places by Rajeli Samar and Richard Ahim. For the Women’s 10km category Lim Siat Fah won first place, while Cherynna Corey Chin was first runner-up and Lau Ngiik Ching in third. They respectively won RM400, RM300 and RM200.