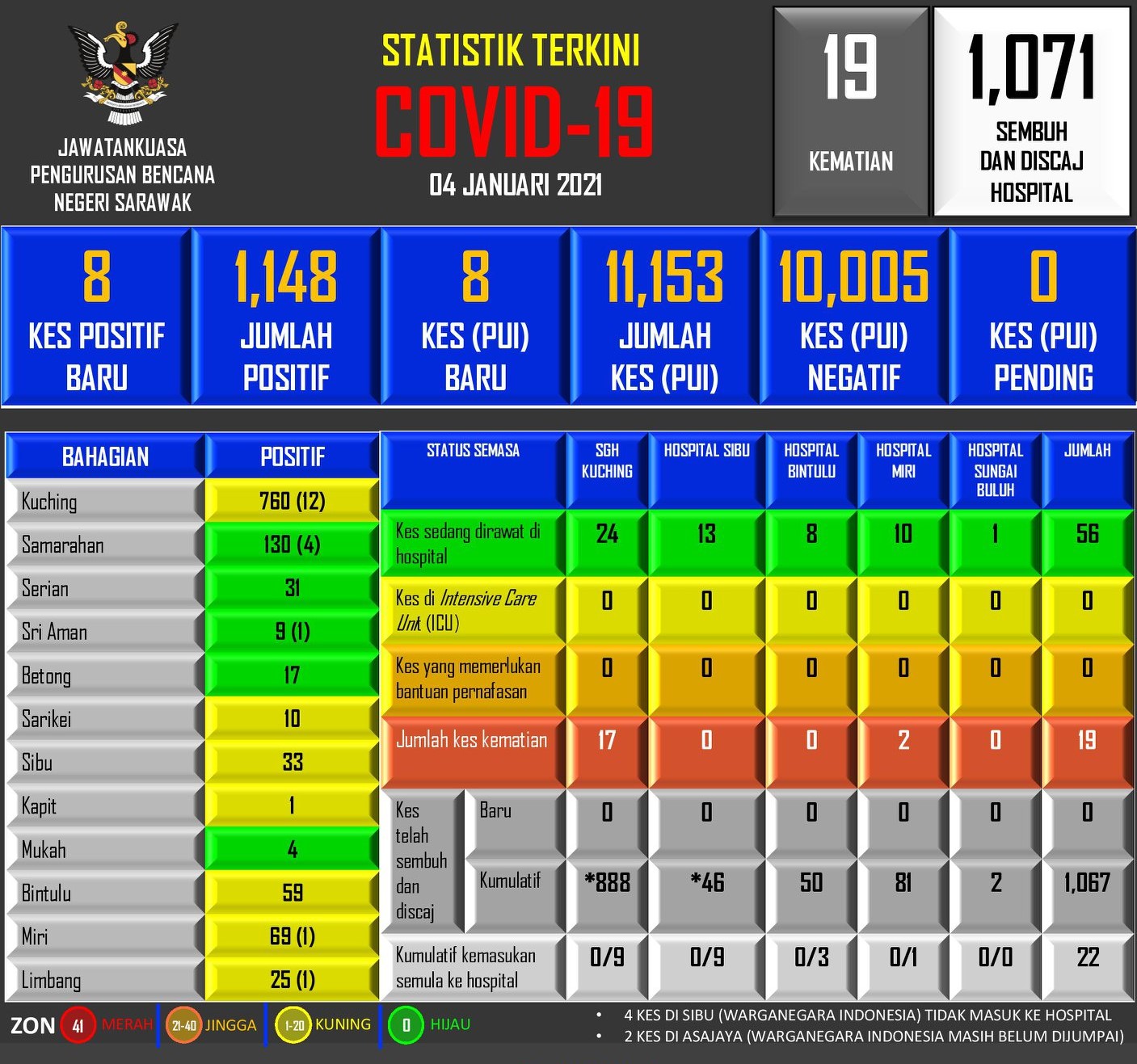 State Disaster Management Committee (SDMC), in a statement on Monday (Jan 4), said all of the cases were detected in this district.

For the imported cases, SDMC said two involved individuals returning to the state from Malaya.

“The case underwent Covid-19 screening and was admitted to a quarantine centre to undergo mandatory 10-day quarantine before being allowed to undergo quarantine at home for the remaining quarantine instruction period.

“The rT-PCR test taken on January 2 was found to be positive on January 3.  The results of the family members were negative for the first rT-PCR test Covid-19 screening,” it said.

The committee said Case 1,143 was a local man who returned to Sarawak after travelling to Selangor via KIA on December 25 from Kuala Lumpur International Airport (KLIA-1).

“The case was admitted to a quarantine centre to undergo mandatory 10-day quarantine and the remaining four days at home. The first Covid-19 screening was conducted on December 25 and found to be negative. However, the second screening on January 1 was found to be positive through the rT-PCR test,” it revealed.

SDMC added one of the imported cases involved a Sarawak child who arrived in Kuching with family members on December 25 from Congo.

“The case is the child of Case 1,109. The case underwent the first Covid-19 screening upon arrival in Sarawak on December 26 and the rT-PCR test was found to be negative. The second screening test on January 1 found this case to be positive,” it said, adding that the case showed no signs or symptoms and was admitted to the isolation ward at the Sarawak General Hospital (SGH) ward for further treatment.

On the locally transmitted cases, SDMC said four were individuals who were screened for having close contacts with previously reported cases involving existing clusters, namely the Stutong Cluster in Kuching District.

“All of them underwent screening on January 2 and the rT-PCR test results found them positive for Covid-19 infection on January 3.

SDMC revealed that Case 1,148 involved a local man who underwent Covid-19 screening at a private hospital in this city on January 3.

“From the initial investigation, the case has no contact with any positive Covid-19 cases and has no movement abroad or travel history to high-risk areas in any other state in Malaysia.

“The case did not experience any signs or symptoms and was admitted to the isolation ward at Sarawak General Hospital for further treatment,” it added.

H&L continues to show it cares