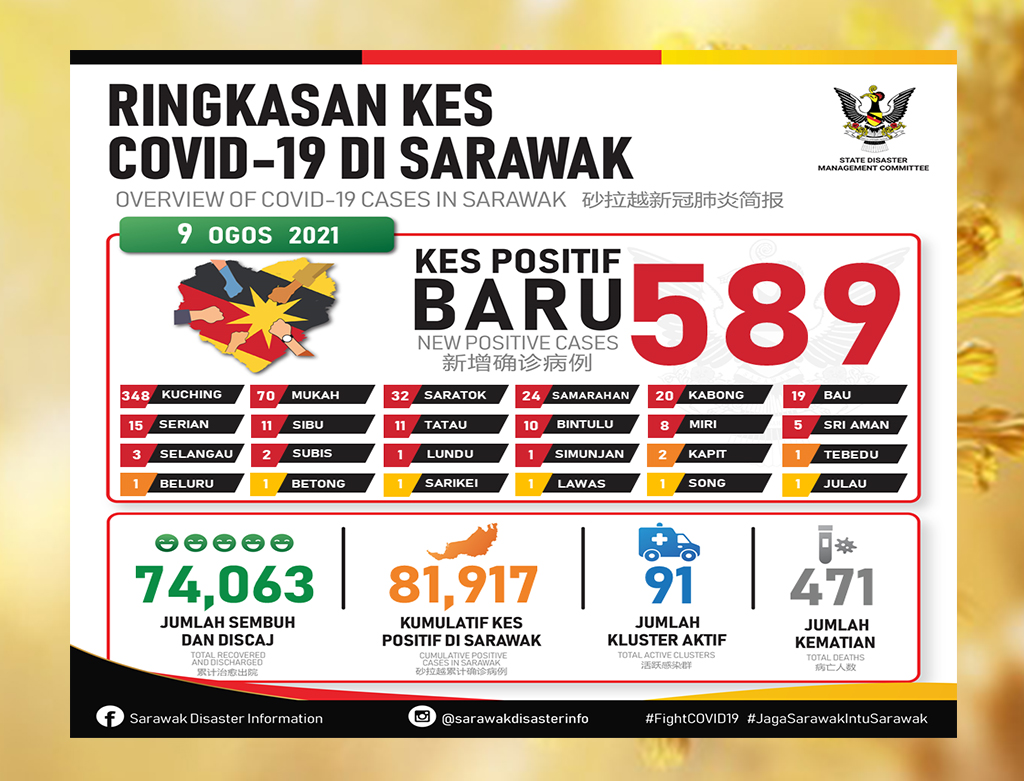 There were eight cases in Miri; five in Sri Aman; three in Selangau; two each in Kapit and Subis; one each in Betong, Lundu, Sarikei, Tebedu, Lawas, Song, Julau, Beluru and Simunjan.

There were 40 cases from other screenings from health facilities and two Import B cases — individuals returning from other states in Malaysia, namely Kelantan and Terengganu.

“Based on the clinical category, there were 481 cases or 81.66 per cent in Category 1 (no symptoms or signs) whereby 40.54 per cent of the cases did not have a history of Covid-19 vaccination.

“There were 107 cases or 18.17 per cent in Category 2 (light symptoms or signs) whereby 26.17 per cent of the cases did not have a history of Covid-19 vaccination. Category 5 (lung infection and require ventilator) had one case or 0.17 per cent.”

As for the new deaths, the 469th fatality was an 80-year-old local man from Sri Aman who was confirmed positive on July 8.

His body was brought to Sri Aman Hospital. He had high blood pressure, chronic kidney disease and stroke.

The 470th fatality was an 85-year-old woman from Kuching who was confirmed positive on July 6.

Her body was brought to Sarawak General Hospital (SGH). She had high blood pressure and stroke.

The 471st fatality was a 56-year-old local man from Simunjan who was confirmed positive on July 30.

He passed away at SGH, having had high blood pressure, dyslipidaemia and obesity.

SDMC said that 837 patients were also discharged from hospitals and low-risk treatment centre (PKRC), bringing the number of active cases to 7,203.