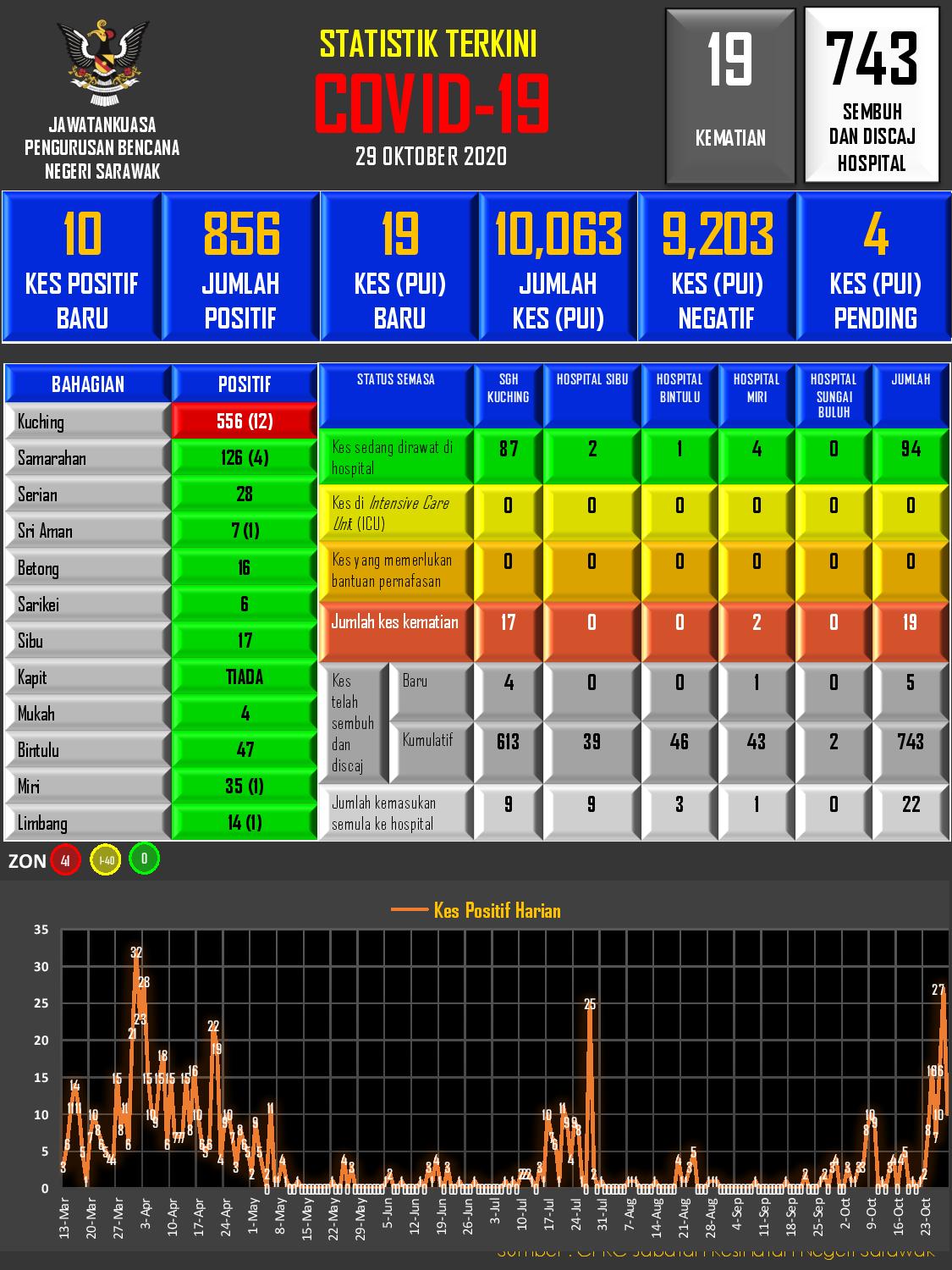 KUCHING: Today, Sarawak recorded ten new positive Covid-19 cases in Kuching, including a two-year-old. The child is the youngest case Sarawak has seen so far.

Of these ten cases, eight were local transmissions while two were imported cases. With that, the total number of positive Covid-19 cases in the state has risen to 856.

“Two, aged 2 and 58, are close contacts of Case 818. Both cases did not show any signs or symptoms,” he told the Sarawak Disaster Management Committee (SDMC) Covid-19 update press conference today.

The other two, aged 20 and 26, he said, were social contacts of cases in this cluster, He added both cases had experienced fever and cough symptoms.

“All these cases underwent reverse transcription polymerase chain reaction (rT-PCR) screening at a government health facility on Oct 27 and the test results returned positive on Oct 28,” said Uggah, adding that all four cases had been admitted to Sarawak General Hospital (SGH) for further treatment.

He said there were three new cases involving the Baki Cluster.

“These cases, aged 12 to 20, are family members of Case 768 and Case 775. All cases were at the quarantine centre when they were detected,” he said.

Uggah, who is also SDMC chairman, said the cases underwent their first rT-PCR test on Oct 18 and their results on Oct 19 were negative for Covid-19.

“On Oct 27, all these cases underwent their second rT-PCR tests and the test results on Oct 28 were positive. These cases have been admitted to the SGH for further treatment,” he said.

He said another locally-transmitted case reported today was detected via the active case detection (ACD) operation by the State Health Department on Oct 26.

“The case is a local woman who works at a beauty centre in the Galacity business area here. She has been experiencing flu and sore throat symptoms since Oct 21,” he said.

He said the case did not have a history of travel to Covid-19 infection risk areas, nor was she a close contact to a positive Covid-19 case.

Uggah revealed that the case had been admitted to SGH. He said contact tracing and further investigation on the source of infection were being carried out.

On the two imported cases, he said they were both Indonesian women who had arrived from West Kalimantan, Indonesia with permission under medical tourism.

According to Uggah, these cases were a patient and an escort who were authorised to enter the state to seek treatment at a private hospital in Kuching.

“Both individuals entered Sarawak on Oct 21 and underwent Covid-19 screening on the same day, with the results returning negative on the day itself,” he said.

He said the cases then underwent their second Covid-19 screening on Oct 28 and were found to be Covid-19 positive on the same day. Both cases were admitted to SGH for further treatment.

The deputy chief minister reported that five cases had recovered and were discharged from hospitals today – four from SGH and one from Miri Hospital, bringing the total number of recovered and discharged cases so far to 743 or 86.8 percent.

“The total number of cases still being treated at hospital isolation wards is 94, of which 87 are in SGH, four in Miri Hospital, two in Sibu Hospital, and one in Bintulu Hospital,” he said, adding that none were in intensive care units (ICUs).

He also said that 19 person under investigation (PUI) cases were reported today while four PUI were still awaiting laboratory results.

Uggah said 209 persons under surveillance (PUS) checked into hotels today to undergo quarantine, bringing the total number of PUS in 24 hotels to 2,153 while 28,512 had completed their quarantine period.

He said Kuching’s status as a red zone was unchanged today with 77 local transmissions reported in the last 14 days. With that, there is one red zone district in Sarawak while the other 39 districts maintain their green status.

Little hut goes up in flames

Increase in number of scam cases

The illusion of truth!