It was in the ancient city of Margilan, Uzbekistan that I was to meet Aziz Murtazeav once again. Just two weeks prior, we had been introduced at the World Crafts Council Meeting in Chiang Mai. To his disbelief I had arrived together with 4 others from Kuching to participate in the Aspara Fashion Week in Tashkent, far sooner than he had expected.

Following a strenuous drive from Tashkent to Margilan, it was good to stretch our legs and stroll around his home, whose square-like arrangement places buildings around a courtyard where leafy vine trees will soon be bearing grapes for the summer. All family members live together in rooms surrounding the communal compound where children may play under an apricot tree.

Aziz is an artist and the founder of Crafts Studio Ikatuz which does ikat, embroidery and block printing. He exports his handmade products including fashion and bags to the United States. Well versed in history and culture, Aziz had acted as our translator and guide during our time in Margilan. After a refreshing tea with bread, sweet strawberries and tasty almond nuts at his home, we were up and ready to explore the region’s largest silk factory in the Fergana Valley. 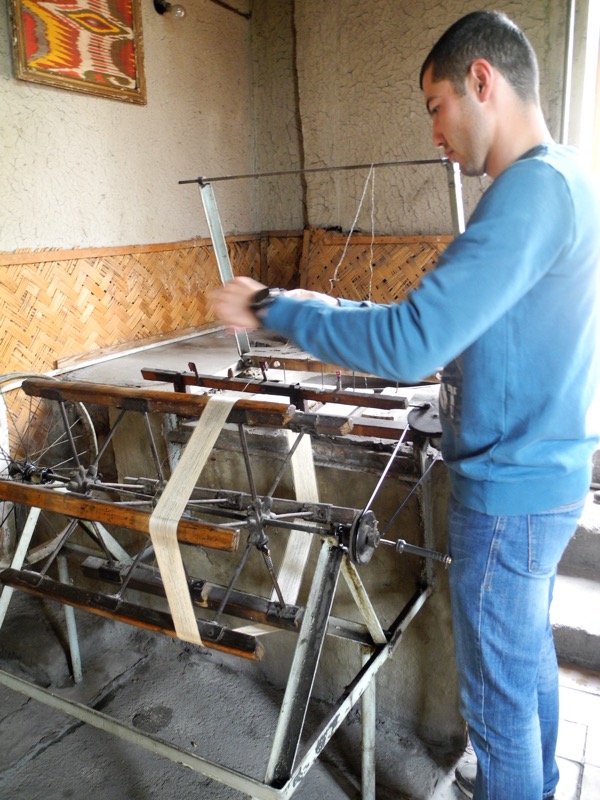 At the time of the Han Dynasty, the region was traversed by ancient trade routes where silk, tea and spices crossed the valley towards the Mediterranean and the Middle East. It was likely cross-cultural interactions and the disseminations of ideas that might have brought sericulture to Margilan. Some speculate that the then invaluable knowledge of silk production was revealed to the region so that supplies did not have to be transported through the Tien Shan Mountain from China. Nonetheless, it remains uncertain as to who had passed on the secrets of silk and why.

Over a thousand years later, these traditional methods of silk production are still practiced in Uzbekistan. We were brought to a factory founded in 1972, claimed to be the best in the region by virtue of production volume and quality. It was a public enterprise from 1982 to 1993, before becoming privatised in 2000 and named ‘Yodgorlik’, which means souvenir in the Uzbek language.

Passing the imposing orange main gate, we found a catwalk training session in progress which used open space as a mock runway. The models were college students preparing for a show, with Yodgorlik as the sponsor for the silk and cotton being used to produce the fashion pieces.

The tour took us to various sections of the compound with a multitude of buildings, separated in between by sweet-smelling open spaces and pathways that proved to be lined with roses and lavender. We even saw their 140 years old Mulberry tree.

With the weavers and looms stationed at the furthest end of the factory, it was apt that we began there. Ikat weaving has seen a significant growth after the fall of the Soviet Union and the artisans hone their skills to produce the finest ikat for international markets. In recent years big names in fashion have used not only woven ikat but also famous embroidered work from Uzbekistan for their collections. Besides silk textiles, Yodgorlik also does carpet weaving and even produces a fabric that is a blend of both cotton and silk, known as ‘Adras’.

Jacqueline Fong, the founder and owner of Tanoti House in Kuching, spent significant time amongst the looms asking the most questions. Unsurprising, as she is also helping our weavers back home to earn a living while preserving the heritage of songket weaving.

Like myself, fashion designer Melinda Omar and her husband, Abdul Hamid Som, were very inquisitive about cocoon production. It was learned that caterpillars have particular sleeping hours in between the consumption of mulberry leaves. We watched in awe as gossamer threads were unravelled from the cocoons of the silk worms and spun into raw silk yarn and hanks of top quality filament silk.

Edric Ong, eco-fiber fashion designer, was more into the natural dye methods applied as we witnessed yarns being dyed in large tubs. Helped in part by a British Council-funded project in the late 90s, some of Yodgorlik’s production crew were sent to India to learn about natural dye processing.  Here and there we saw pigments of raw colours and learned that pomegranate rind is for gold, cochineal and madder root for red, certain nut husks for brown and, being the only one familiar to me, the use of indigo for blue. As it was nearing closing time for the factory, we did not have the opportunity of visiting the sewing department and instead saw some sewing in Aziz’s own home where some women were working overtime for an international order.

As is the norm, our visit to Yodgorlik was concluded with shopping and all of us brought home something. Central Asia is making a mark on runways not just locally as seen at the Aspara Fashion Week but also globally. Their artisanal weaves and embroideries have caught the attention of international designers who have fallen for their handiwork and have started introducing their products across London, Paris and New York.

We were most honoured to be invited to Uzbekistan to showcase our very own Malaysian products at the Aspara Fashion Week. Jacqueline Fong presented Tanoti’s elegant handwoven silk songket, Edric Ong stunned the audience with his naturally-dyed fashion and Melinda Omar showed how Sarawak’s indigenous textiles can be blended with contemporary styles. At the same time, we learned from and were impressed by the craftsmen of the Fergana Valley and their sustained practices of production. – Vicky Fong