THE narcotic drug was obtained from an unripe seedpod of the opium poppy tree and is reddish-brown with a heavy scent, enough to entice users. In 1839, the British were addicted to the revenue gained from opium trading, just as the Chinese were to the drug itself. It was during the Qing Dynasty of China that the drug played a major role in compromising China’s sovereignty and economy. Before it was used as a dan
gerous drug, opium was used as a medicinal herb.

However, as opium gives a feeling of excitement and offers pleasure to its users, 12 million Chinese citizen had lost their willpower to drug abuse and some even contracted health issues. As the tragedy unfolded, the Qing Dynasty was furious and tried to stop the British from trading opium into the country.

Two bursts of war — the Opium War from the year 1839 to 1842, and 1856 to 1860, between the British and the Chinese over the trade of opium. Much like the effect it had caused in parts of the world, opium also had its prominent presence in the state of Sarawak, particularly in Kuching.

According to Sarawak History researcher, Chai Kit Siang, opium’s influences came with the mainland Chinese during the days of James Brooke, the first White Rajah of Sarawak in 1841. Aside from the Chinese influencing the locals, business-minded Chinese were also the ones who sold opium to Sarawakians. Chai Kit Siang also explained that when Chinese labourers came to Sarawak, they were forced to leave their family members back home. Pitted with loneliness and distress, the labourers turned to opium as a stress reliever. “They exchanged what little they earned for the happiness they gained through smoking opium,” he said.

The meeting with the researcher was over ‘butter coffee,’ also known as the ‘opium coffee’ at a quaint coffee shop called ‘Hiak Yap’ situated at Kai Joo Lane, Kuching. In yesteryears, the lane was amongst the many, crowded with opium addicts.

Hiak Yap’s owner was a little girl back when opium was still legal. Tan Mui Kim was only seven years old when she was tasked to serve the ‘butter coffee’ to the addicts. The coffee shop which was opened since before the Japanese Occupation, had reopened in 1947 after the second world war and became the ‘it’ place for opium smokers.

According to Tan, the first-floor shop beside ‘Hiak Yap’ used to be an illegal opium den, alongside the opposite shop and several rows after. “The den was usually on the first-floor, selling discreetly and was dim all of the time.

When I served coffee to them, I saw the addicts laying on the floor, on concrete pillows smoking opium.” Tan also recollected a scene of a neighbour’s uncle who would sit at the same corner of ‘Hiak Yap’ and drink his coffee after his smoking session. The very same table that the uncle laid his arms on was still at the shop until today. 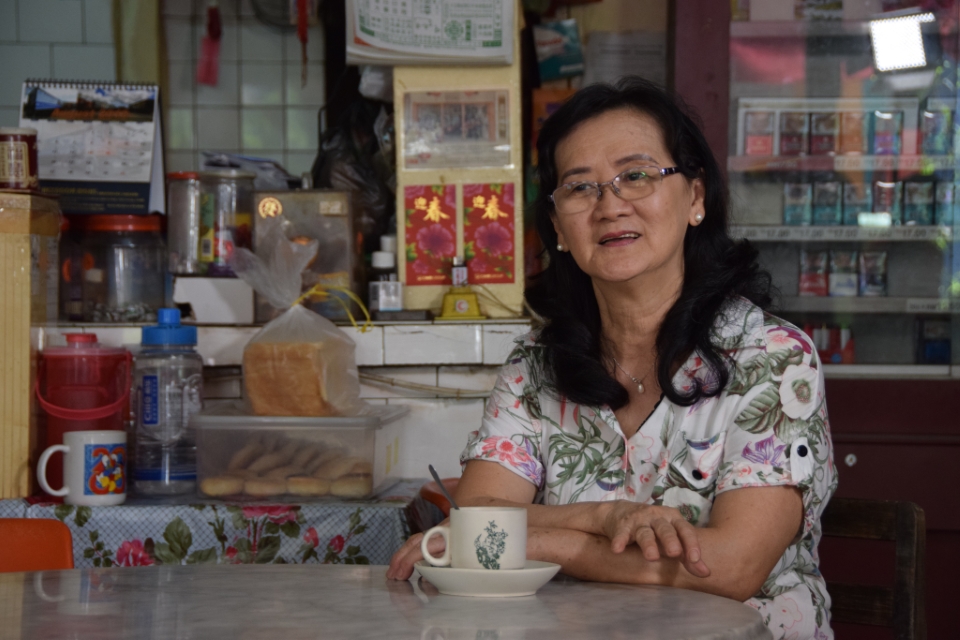 Chai Kit Siang shared that the addicts particularly ordered ‘butter coffee’ and ate the butter first instead of stirring it with the coffee like now, to soothe their dry throats after their session. Hence, the coffee was known as ‘opium coffee,’ as addicts would regulate the coffee shop as the ‘finishing touch’ after their session with the drug.

The nonagenarian shared that during her session with opium, she would feel a mixture of dizziness and euphoria. She said she even felt sexually aroused. It was during the Crown Colony of the British era (after the cession movement by third White Rajah Charles Vyner Brooke) in 1946 that a new system for opium addicts was erected.

Before that, the addicts were certified and could receive a certain amount of opium according to the book ‘Fair Land of Sarawak,’ but soon after, according to Chai Kit Siang, it was deemed illegal.

However, users aged 60 and above were given an education period to stop using opium. Undeniably, opium was part of the history in Sarawak, and at certain places, etched the literal dark memories of smokers absorbing themselves into their own world.