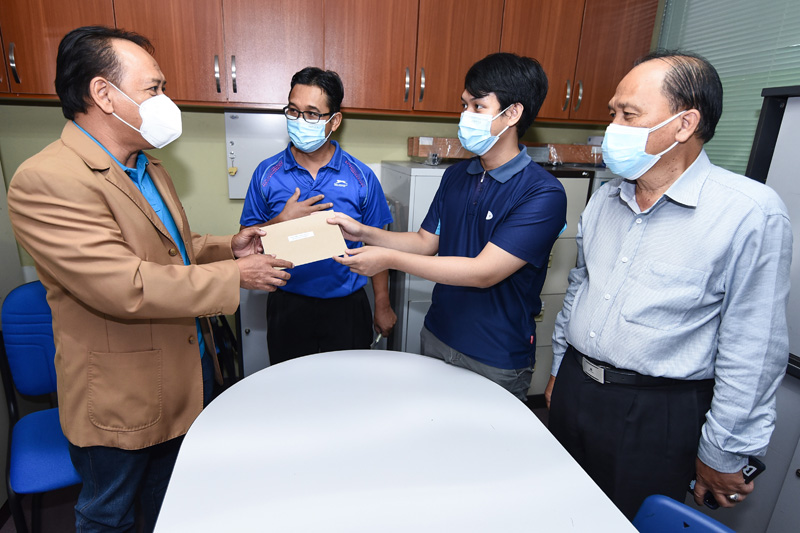 KUCHING: Yayasan John Jinep (YJJ) and Pertubuhan Kebudayaan dan Perpaduan Kuching (PKPK) have contributed a total of RM5,000 to Aezzra Marvin Vincent, who will be furthering his studies at Merseburg University of Applied Sciences in Germany.

The brilliant local 21-year-old, who achieved 10A+ in his Sijil Pelajaran Malaysia (SPM2020), will be undertaking a three-and-a-half-year course in Chemical Engineering at the university.

He received RM3,000 from YJJ and another RM2,000 from PKPK in support of his educational journey during a simple ceremony at Putra Sentosa Enterprise Sdn Bhd here on Friday (July 16).

“I believe Aezzra will be a very good asset not only to his family but also to the community, for the Bidayuh, and for Sarawak,” said William Jinep.

He encouraged Aezzra to come back after his studies and contribute to the growth and economy of Sarawak.

“Chemical Engineering is good subject which has a lot to do with our oil and gas (O&G) industry. With Petroleum Sarawak Berhad (Petros) coming up and Sarawak taking over its petroleum rights, I think the opportunity for Aezzra to participate in the industry is very bright,” he said.

He explained that YJJ, which was established in 2015 with the noble aim of assisting Bidayuh students, did not provide full scholarships but rather some bridging financial support to help needy students at the start of their journey into tertiary education, before their other scholarships or loans are approved.

“We want to build the human resources of the Bidayuh community so that we can contribute,” he said.

He said over the past few years, there were many young and intelligent Bidayuhs who had no choice but to take up work at coffeeshops as they could not afford to further their studies.

“They cannot go to university even though they have received offers because their parents cannot afford to pay the entrance fees or the airfare to fly over, so in the end they have to decline the offer,” he said.

William Ding said YJJ endeavoured to help needy students to ensure that they do not give up on their studies.

“We provide the initial financial means – just enough to cross the bridge. Later on, these students may apply for a loan from the National Higher Education Fund Corporation (PTPTN) or Yayasan Sarawak.

“The money contributed by YJJ is to give students the encouragement and they do not have to pay back a single cent,” he said.

The recipient’s father, Vincent Ragot, expressed his gratitude to YJJ for the aid.

“I am also very grateful and proud of Aezzra’s achievements,” he said.

Another of Aezzra’s significant achievements was gaining the highest mark in the world for Cambridge International AS Level Mathematics in the June 2019 Cambridge examinations. At the time, he was undergoing his studies at the German-Malaysian Institute in Kajang.

Volunteers get items from Hope Place 0