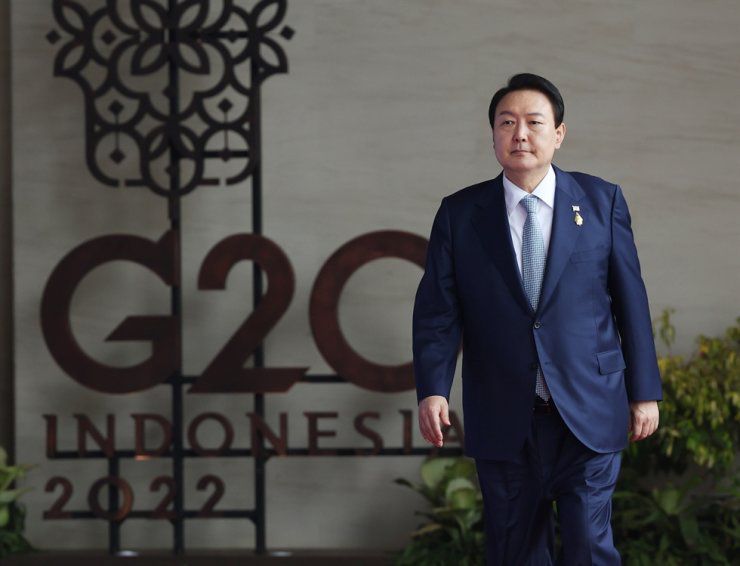 Priests in S. Korea draw fire for wishing for Yoon’s plane to crash

SEOUL: A priest of the Anglican Church of Korea has been disqualified for openly wishing for President Yoon Suk-yeol’s plane to crash during his ongoing trip to Southeast Asia.

The Daejeon Diocese of the Anglican Church of Korea announced the disqualification of Rev Kim Gyu-dong as a priest Monday after he called for a nationwide prayer for the crash of the presidential plane in his social media post, Yonhap news agency reported.

President Yoon Suk-yeol accompanied by first lady Kim Keon-hee began a trip to Southeast Asia on Friday to attend the Association of Southeast Asian Nations and Group of 20 summits, and they are scheduled to return home Wednesday.

According to Yonhap, Kim recently uploaded a social media post about Yoon’s Southeast Asia trip, saying he wants the presidential plane to crash and wishes the entire nation would pray for the accident.

Kim deleted the post later after his church was flooded with protests, explaining that the post was intended as a personal memo but was disclosed by mistake.

A church official said Kim’s writing cannot be accepted as remarks that can be made by a priest, adding he has lost all church posts, including the head of an Anglican Church welfare centre in Wonju, Gangwon Province.

The official said a priest’s personal opinion should not be seen as the official position of the Anglican Church of Korea and the Daejeon diocese.

Coincidentally, another social media post on Yoon’s plane uploaded by a priest of the Roman Catholic Diocese of Daejeon has also caused a controversy this week.

The controversial post created by Rev Park Joo-hwan features a composite image of Yoon and first lady Kim falling from the presidential plane and text that includes “It’s a simple accident due to a defect in the aircraft” and “Please accept our wishes.”

In response to the growing controversy, Park closed his social media account and told Yonhap News Agency by phone that he had intended to express public discontent and was embarrassed by the excessive attention to his satirical cartoonlike post, Yonhap reported.

On Tuesday, the Diocese of Daejeon suspended Park from all priestly duties and made a public apology for his controversial remarks.

“We apologise for the hurt and shock many people have experienced in relation to Father Park’s inappropriate remarks,” it reported Kim Jong-soo, chief of the diocese, wrote on its official website.

He said Park has been suspended from all priestly duties as a punishment for the post. – BERNAMA

Muhyiddin: Takiyuddin was never instructed to negotiate with BN on forming govt
Previous Post
BN’s priority is to win GE15, not on possible merger partners to form new govt